With Yoga Jal, this husband-wife duo is changing the way you energise yourself 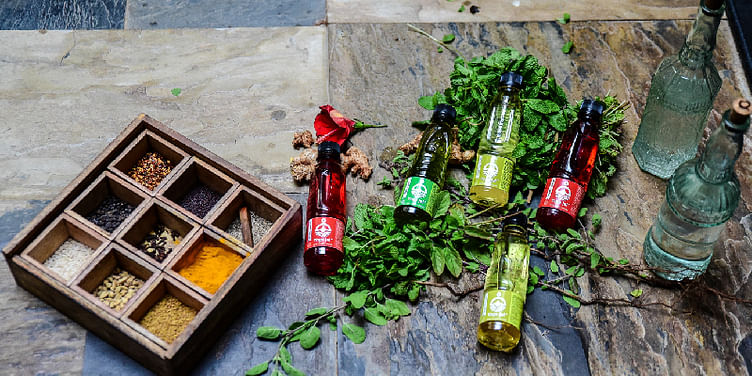 Yoga Jal is marketed as a ‘synergy drink’, to balance the body and mind, using simple kitchen recipes passed down over generations.

The problem it solves: ‘Synergy’ drink, free of artificial additives, made with herbs and natural ingredients

Life, they say, is a series of evolving events that lead one to their calling. This could not hold more true than for Nayana Kanthraj and her husband Deepak Ugrappa, who are looking to script a new story in the F&B segment.

Nayana, a journalist by profession, was passionate about yoga and also held classes for several years.

Deepak, on the other hand, worked at an IT company and was also a cricketer. Practicing and teaching yoga for over a decade and a half, Nayana decided to take the plunge and start her own yoga studio - Yoga Bimba Pvt Ltd.

Yoga, Nayana explains, represented physical and mental balance, and to help her students with the former, she would often come up with energy drinks, all made in her kitchen from herbs grown in her garden. These were recipes passed down to her from her mother and grandmother.

As the beverages got popular with her students, the idea of formally marketing them took shape. It got a further impetus from Deepak. “I’ve always wanted to start something on my own, and having worked in a 9 to 5 job in the IT industry was pretty exhausting,” he says.

“The defining moment came in 2015, when I was heading back home from work, stuck in a traffic jam on Mysore Road, and happened to notice a truck carrying the ‘Bindu Jal Jeera’ beverage. That’s when it struck me that we could package and sell the homemade energy drinks that Nayana made, and decided to name it Yoga Jal.”

Excited about the name, and the idea, Deepak was keen to start working immediately. He quit his job in 2016, the couple put in their savings, and went full-steam ahead with the new venture.

Research showed that while there were many energy drinks in the market, there were none that were organic and herb-based. The duo also met people from the food and beverage industry and got the opportunity to work with some experts, one of them being Praveen Dwivedi from Future Group.

As Nayana and Deepak worked to finalise the recipes for their product offerings, they realised that sourcing raw materials were a challenge. While ginger and mint leaves were easy to source from farmers, ingredients like tulsi were tough to farm in a home garden.

They struck a deal with Olive Life Sciences, a nutraceutical company, that came on-board as the manufacturing partner, and put things in motion, both production and sourcing raw material wise. Nayana and Deepak, both 35, work closely with Olive Life and are involved from handing the recipe, to doing the quality check. The manufacturing is unit located in Nelamangala on the outskirts of the city.

The duo makes frequent trips to work with the formulation team, Shariq, in order to maintain the quality standards. They are also involved in the initial stages of the four-step testing phase, which then goes into the factory for further quality checks.

In April 2017, they received a license and decided on a soft launch. To market their beverages, the couple approached a local organic store and gave a few samples. Nayana herself also went on the field to promote the products. The duo actively test marketed the drinks, took feedback, and improvised on the products.

From the logo design to the marketing and sales, Nayana and Deepak have stayed hands-on in launching Yoga Jal.

Yoga Jal hired its first employee - the salesperson Bharat - recently, and the energy drinks are now sold across more than 60 organic and retail stores in Bengaluru.

Nayana and Deepak have two little children, Tanav and Vachan, aged 6 and 2.5 years, who are they say are their 'chief tasters' and are actively involved with the promotions.

While the market is brimming with energy drinks and cold pressed organic drinks, Yoga Jal comes with a unique blend of herbs, that contain natural preservatives to retain active ingredients. The drinks do not have any refined sugar and artificial colouring and only contain 8-10 percent sulphur-free sugar. “Our USP is herbs-only, and one can consume the juices without diluting,” says Nayana.

She adds, “Yoga is to help balance the body and soul, and the idea was to give people something to consume that helps them strike the perfect balance, just like yoga does.”

The herbs work as ‘adaptogenics’, which adapt their benefit to the human body according to climatic conditions, and specific conditions. “We are all hard pressed for time, and stressed out. So, Yoga Jal will help in balancing the mind, body and soul - hence the new category synergy drink,” Deepak adds.

The design of the logo and bottle packaging was inspired by the concept of Yoga, and the three core values that inspired them to create the drink - ‘ayuh’, ‘arogya’ and ‘ananda’, which means life, health and happiness, respectively.

Nayana and Deepak aim to be the top adaptogenic beverage in South India. They are looking at general stores, and organic stores as the first distribution channel. The second channel would be to get a deal with e-commerce platforms, followed by events, and catering services as the third channel. They also aim to make their mark in sporting events as well as in yoga studios and gyms.

Yoga Jal has so far sold over 8,000 bottles, and in December alone sold more than 2,800 bottles. The drinks are already available at online stores Pinhealth Groups, Medlife, Itiha, PlaceOfOrigin and will soon be available on Flipkart. They also won the TiE Entrepreneur Award in 2016.

The whole of last year was about limited production as Nayana and Deepak were keen on improvising based on customer feedback. They’re currently selling the third version of the drink, and it is available in three variants – Tulsi Cooler, Healthy Hibiscus and Ginger Mint Jalwa. The drinks come in a 250 ml bottle, with a shelf life of six months.

The duo plans to sell 10,000 to 15,000 bottles between January and March, in addition to hitting the shelves of 500 stores in 2018. They’re currently looking for investors to go ahead in full swing.

“Together, we want to make Yoga Jal the number one synergy drink. When we started out, people thought we were crazy, but we took the journey step by step. We were backed with opportunities, from mentoring to winning awards and that kept us going. The journey has been all about passion, backed with immense encouragement,” says Deepak.

To end, Nayana says “Yoga Jal has found us!”