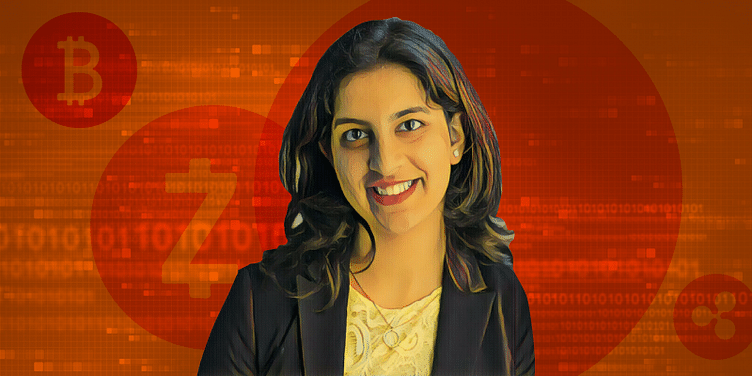 Harshita Arora is not your average 16-year-old, maybe that’s why we choose to write about her. And yet, there are some things about her that continue to surprise us.

At a time when teenagers her age are worrying about Physics, Chemistry, and Math at school, Harshita is self-teaching herself how to build newer technologies in Artificial Intelligence. Her first project was a cryptocurrency price tracker, which ranked second in the list of top paid apps in the Finance category on Apple’s App Store.

And the pressure now seems to be on outperforming herself.

What makes her journey all the more inspiring is that she has done this living in the small town of Saharanpur in Uttar Pradesh.

From dropping out of school to hitting MIT

For Harshita, her journey of becoming an app developer started when she was 15. She learned designing back when she was 13. She quit school after 8th standard and was homeschooled starting at the age of 14, which she also eventually gave up. Speaking about this rather radical decision, she says,

“Even for homeschooling, you have to give exams at the end of the year. I felt that I could do better off if I don’t follow the traditional schedule.”

Contrary to popular belief, Harshita does not come from a background of researchers or technologists. Her father is a stockbroker, and her mother is a homemaker. Harshita says her inspiration to code came from her Computer Science teacher. She recalls,

“Our Computer Science teacher would give us a lot of tasks around designing posters and he emphasised deeply on a lot of design principles.”

That’s what hooked Harshita to understanding the principles behind designing a well-balanced app. In 2016, she managed to score an internship with Salesforce in Bengaluru became a stepping stone to her attending MIT Launch from Massachusetts Institute of Technology (MIT), a four-week long entrepreneurship programme for people between the age of 15 and 19.

And this is exactly where she thought of coding her first iOS application. Back in India, she started researching on how to make iOS apps, and started learning swift programming.

“I loved the way I could make apps and put out products much easily. The work was more tangible than making websites,” speaks Harshita. Her first application was called Crypto Price Tracker.

“I have been reading about cryptocurrencies for a while now, because it was all over the internet. And found the crypto price tracker an interesting area, considering the existing apps were either really bad, or were incomplete.”

After a two-month-long development, the app went live on January 28, and almost immediately started getting the attention of the world - Hunt tweeted about her app, and it became the number two finance app in the US and Canada Apple App Store within 24 hours of launch. On the first day, the app received 240 downloads, and 1,000 in the week.

Her investment in the app has been all of $500.

“It is my first solo project, and I didn’t want to do something really risky. I wanted to start with small steps of learning how to walk before driving a car. It is important to start small so one makes the newbie mistakes, rather than being really ambitious at the start.”

For Harshita, the internet is her canvas, and Quora her bible. She says Quora has been her constant companion, and she believes in giving back the good karma. Getting her knowledge from the question and answer site, Harshita has a little more than 1,700 followers on Quora.

She also turns to Medium posts to share her learnings. And she outperforms on that front too. With the blogging site rating her a top writer for the design category, she is followed by 2,700 people on the platform.

What’s her next post, I ask, to which she says - how to successfully market your app, the dos and the don’ts? What about when she hits a roadblock? Harshita says she usually posts her queries on Facebook, and her network helps her make successful connects.

She also leverages her mentor connects from MIT Launch, including Danielle Strachman, who along with Michael Gibson runs the 1517 fund in the US. The fund looks at young teenage startup entrepreneurs and funds their businesses.

“The mentors help me come up with things I never thought. Apart from, obviously, the refreshing perspectives, they push me also for better practices. Once I think I can build something, they explain me on the steps forward. Sometimes they also help me with codes and send snippets.”

Codementor.io is another tool which Harshita uses extensively. Although none of her ventures are funded, the teen says she is in the pursuit of something long-term and will then look at funding.

What’s next for world domination?

So, what’s next on her plate? “Image recognition and AI,” Harshita swiftly answers. “I am learning Machine Learning and want my next project to be on AI. The one idea I am really interested in is Food AI, where users can swiftly get a break down of the ingredients of nutrients of the food they are having. This is extremely useful for those who have food allergies.”

Although, Harshita states she will take two months to learn this. She tells me she might be leveraging Microsoft's COCO (Common Objects in Context) platform, and leverage the existing database in there.

The early prototype of the product could be seen in the next two to three months.

So, how does the average day of a teenager who is exploring the next frontiers of technology look like?

She wakes up at 7 am every morning, and tries to get into exercising. But what she needs to work on is decided the day before. The first practice is to always start with the leaning.

“When I start learning, I prioritise and avoid thinking whether it will help or not. But what I constantly ask what my goal is? When I am building, I look at it feature by feature and prioritise towards the end goal. It all depends on the end goal.”

She does confess that sometimes, she is caught up in the conundrum of learning things and reading books not really relevant to the project. “And reading can make you learn a lot more. That could be a book or medium. I try to read at least one book a week, and being consistent helps. Unless it is a busy week.”

She has been hooked to Reddit founder Alexis Ohanian’s book - Without their permission: How the 21st Century will be made, not managed.

What about starting up?

“I personally feel that startups are super fascinating and are a much rewarding process. It is much better than getting a 9 to 5 job.”

Harshita’s family proves to be her biggest support system to her success. “The feel proud of me. Sometimes, I try to explain to my grandparents what I do, and they make sure they encourage me to do more. My mum still thinks that there are only a couple of hundred apps on the app store,” jokes Harshita. The teen will look to migrate to the US next year.

More power to her!

(There have been allegations on discussion platform Reddit that Harshita did not write the entire code for the app, and failed to give due credit to the developer. YourStory maintains due research was done before writing the article, and that Harshita's claim of having built the app is substantiated.)