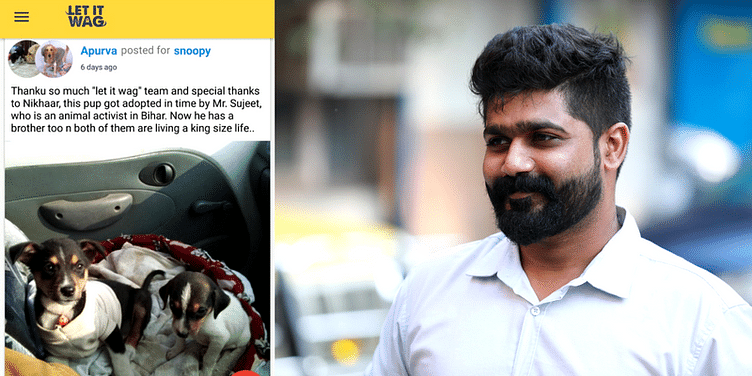 Let It Wag helps animal lovers stay connected to a network that helps keep track of stray animals in trouble.

In today’s fast-paced, highly digitalised world, some humans have ensured stray animals are not left behind. Often overlooked, these strays are found hurting, homeless, and fending for themselves. But this is changing, with Let It Wag, an app that connects animal lovers and caregivers across India so that strays get the medical attention they need in real time.

“Let it Wag is like 911 for animals. The whole idea is to get all the stakeholders on the platform and simplify and improve the turnaround time for rescuing animals,” says Yash Sheth, the founder of this mobile application.

Within 100 days of its launch, Yash started to witness a spiral of change. With over 4,000 plus users on their Android app, and through volunteers the team has helped 215 dogs, 15 cats, 3 owls, 12 pigeons in trouble. Also, two puppies have been adopted, 27-year-old Yash adds.

It all started 15 months back when Yash was going about his day when he suddenly heard a dog howl in pain. Curious, he looked out his window to find a dog lying on the road.

“I called my friend and we went to see the dog. His leg was crushed. We picked him up and put him on the footpath. I called the animal hospital for ambulance but there was no response from them. I then called a local vet but he was already busy and was out on some other case,” Yash remembers.

Hence he turned to social media for help. He took a photo of the hurt animal and put out an SOS message on his Facebook page. Messages started pouring in, and within an hour he managed to share the cost of a private ambulance with a lady, and the stray received medical attention.

Yash, who completed his IT Engineering in Mumbai, continued to receive messages of support from people till late evening that day.

Friends tagged like-minded animal lovers and almost everyone wanted to help. Even strangers came forward, looking to help in some way.

“This incident led me to question why, despite being surrounded by so many animal lovers, we were we not able to help the animal quickly. This led to the birth of 'Let it Wag', where the solution is to connect animal lovers in real time,” says Yash.

Explaining the interface of the app, Yash says that the aim is to connect with nearby animal lovers in real time to get help faster.

For example, if you see a dog bleeding on the road and you are unable to attend to him, you can send a message to the animal care-giving community in five steps.

A case is created and is broadcasted to all the people nearby who have the app; they also receive a notification.

In case there is no one available to accept the case, the user has access to database of veterinarians, ambulances, NGOs and vet chemists near their location.

“There was a case where one of our app users was travelling in Mumbai Metro and saw a girl Googling some numbers for NGOs to save animals. She then told the other girl to download the Let It Wag app and create a case there. The girl managed to help three strays via the app in her area,” Yash says proudly.

Further, the mobile application currently allows its users to adopt an animal and it also acts as a ‘social feed’ for animals and pet owners.

The project is partly self-funded and partly crowdsourced through which Yash raised Rs 20,000.

“We want to get all the stakeholders on the app, right from vets, NGOs, local volunteers, feeders, to the government, and animal lovers, to work together to save animals. We want to work closely with local authorities and government to make things more streamlined and effective,” says Yash.

In the future, Yash also aims to raise funds for animal care— feeding, medical cost, hospital bills, and ambulance transportation. He is currently working on an upgraded version of the mobile app, which will enable a user to find foster homes, connect with blood donors for animals, and also report animal abuse.