To transform hiring, trio switches gear from investor to entrepreneur 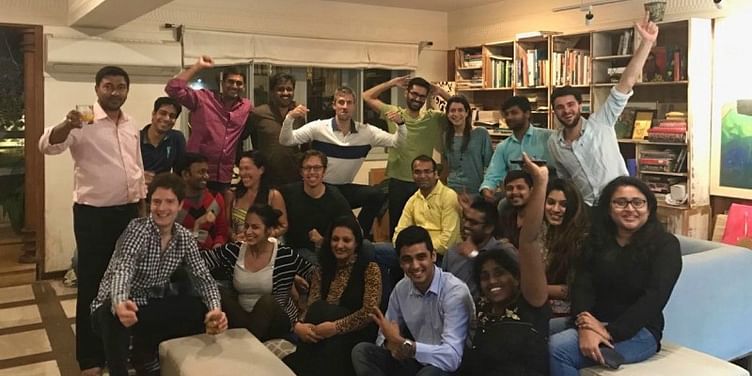 For the success of any enterprise, manpower is often the single largest factor – cliched, but it was this thought that led Paul Breloff, Simon Desjardins and Matt Schnuck to switch hats from investor to entrepreneur.

“We experienced firsthand how the social enterprises in our India portfolios consistently struggled to hire the right people they needed to grow their businesses,” says Paul. Every month, over one million people enter India’s workforce, they say, and given this volume, most companies are left to sort and sift through hundreds of applications for a single job opening.

The co-workers turned friends were part of the impact investing and tech entrepreneurship space in the US, and while Simon had spent eight years at the Shell Foundation, Paul had founded Accion Venture Lab.

To make life easier, they found most companies rely on keywords in CVs and personal connections to guide hiring decision making. “We believed both job-seekers and employers deserved a better way to find each other,” explains Paul. It was then that the trio decided to build a recruiting solution for their portfolio companies.

After a few searches for their portfolio companies as a side-project, the three realised that the current CV/resume-based model of recruiting was broken. Paul says it is, in fact, mind-numbing to look through hundreds of CVs.

“So, we decided to build a better way to hire, built on the insight that the traditional CV is dead, or at least dying, and we need a new way to collect and understand signals of competence, skill and fit. With Shortlist, we hope to give companies the tools to build great teams based on genuine ability and fit, not pedigree,” says Paul.

That is how Shortlist was born. It is a platform that, once CVs reach a company, screens the candidates using predictive chat-based interviews, and online competency-based assessments. The team claims to have worked with over a hundred organisations so far, including Ather Energy, DHL, ITC, MicroEnsure, and Xynteo.

What took time was creating a proprietary screening and application platform from scratch. “We overcame this in true Shortlist fashion - hiring tech and product teams that were an incredible fit for our mission and really up to the challenge,” says Paul.

The team then screens these candidates using chat-based interviews, online competency assessments, and other proprietary tools that predict how candidates will perform in a particular role. The patent pending technology creates a single application flow to engage candidates across a company’s sourcing channels, including job boards, referral programs, and existing third-party recruiters.

The team then screen these candidates using chat-based interviews, online competency assessments, and other proprietary tools that predict how candidates will perform in a particular role. Employers receive access to interview-ready candidates, and ultimately only engage with the applicants who possess the right ability, experience, and fit for their teams.

Employers receive access to interview-ready candidates, and ultimately only engage with those who possess the right ability, experience, and fit for their teams. This allows employers to skip the most time-consuming and bias-prone phases of hiring.

Apart from Paul, Simon and Matt, the team comprises of Mridvika Raisinghani, who has over a decade of experience in a range of operational and business development roles at Mindseed, Teach for India, and E&Y. Rishabh Khosla, a former Investment Officer and Portfolio Manager with Accion Venture Lab, and former consultant at Bain & Company is also on board Shortlist.

Sudheer Bandaru, with over seven years of architecting technology systems matching consumers and services and formerly Director of Engineering at BankRate, and Rachel Steinberg, who has product experience across startups and large companies in India and the US, including Housing.com, Google, and IBM, make up the team.

The recruitment process is broken. According to a 2015 KPMG report, the recruitment industry was at $1 billion globally, and yet, less than 10 percent of this has been captured by any structured organised player.

Today there are platforms like Evenrank and Belong, which look beyond the CV to help people hire better. Between 2015 and 2016, over $69 million has been pumped into the space.

Evenrank currently works with Fortune 500 companies and startups including Treebo Hotels, TheHomeSalon (owned by Jean Claude Biguine salons) and OnePlus. Belong, on the other hand, has worked with the likes of Ola and Practo.

“We’ve experienced exciting growth since the launch of our product in early 2016. We’ve worked with over 100 clients across India and East Africa, as well as other leading social enterprises, SMEs, and several major consulting firms. Nearly 300,000 candidates globally have engaged with our site,” says Paul.

“We believe that relying only on the CV, and social media data will trap candidate review in a problem of “garbage in, garbage out” – though we, of course, believe advanced data techniques can be part of the solution,” says Paul.

Prior to that, the company received funding from AHL Venture Partners, Blue Haven Initiative, the Shell Centenary Scholarship Fund, and Shell Foundation, and were a winner of the ANDE-Argidius Talent Challenge.

Shortlist’s short-term plans are to enhance its data-driven talent screening product and roll out new features for both employers and candidates. This includes a redesigned employer portal, which was launched in January, and ongoing improvements to our proprietary skill and competency assessments.

“We are committed to our vision of a world where everyone gets a shot at fulfilling professional experiences. In that light, we’re thinking through how we can help professionals and job seekers access the training and skills they need to succeed in the workplace,” concludes Paul.