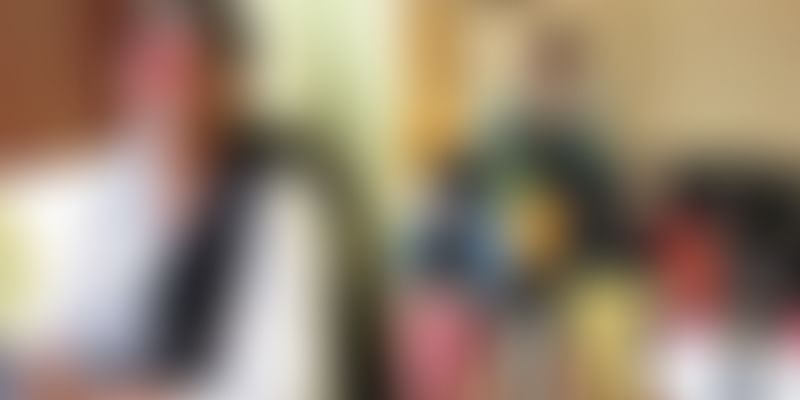 Vanithamani, a 38-year-old woman from Erode, has always been fond of children. That is why, after completing her Master's in Financial Management, she did another masters in Yoga and started teaching that to children in nearby government schools. However, Vanithamani couldn't figure what was exactly missing in what she was doing until she learnt about storytelling.

Now, using that as the tool, she brings about a phenomenal change in the lives of hundreds of children in her district.

Vanithamani was always good at being creative and telling stories to her two children from imagination came naturally to her. She decided to take it one step further after meeting 'Storyteller' Satish four years back. Talking about how it all began, she said,

I have been a passionate reader for over 20 years and I have always loved to work with children. After I understood that storytelling was my strength, I decided to take it up without a moment's hesitation.

With suggestions and help from Sathish and other storytellers across Tamil Nadu, she started a Butterfly Kids Library in her house. In her library, children are not asked to sit quietly and read. Instead, it starts with playing traditional games like pallanguzhi and other board games, a little of dancing and singing. Then, Vanithamani starts telling stories to these children, by enacting them. In an interview with YourStory, she said,

My primary motive is make the children well versed and fluent in tamil. Only after I became a storyteller, I started noticing how listening to these stories transforms the children. The children start thinking independently, become creative, and it also helps to keep them occupied and away from modern electronic devices.

Though she started off by telling stories to children in government schools and private libraries, the problem was that they had very limited books for children. So, Vanithamani decided to start the library of her own and she is supported in this by her husband - both financially and morally.

Though parents of the children Vanithamani engages with insist on paying money at times, she politely refuses.

Slowly, but gradually, the storyteller in her started gaining popularity, and now Vanithamani trains volunteers and teachers to be good storytellers. She has also inspired many to start libraries at their own homes.