In 2 years, automation startup Addverb signs up biggies like Patanjali, ITC, and Coca-Cola 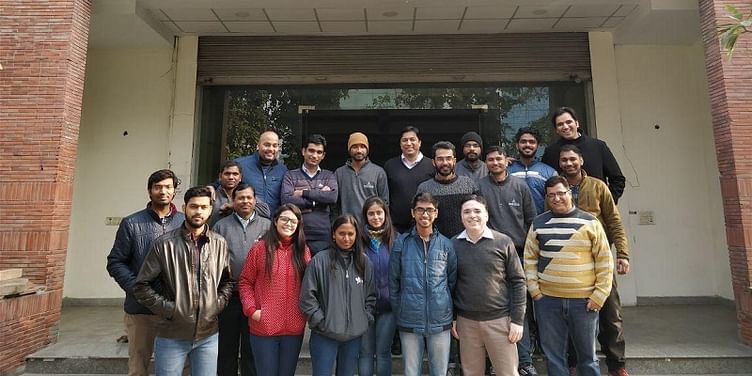 6 young Indians are changing the way plants and warehouses are automated in India by leveraging technologies in the supply chain to tap maximum potential.

The problem it solves: Software and hardware for material and process handling, for the Indian retail, logistics, and manufacturing industries.

Who says “Make in India” was just a concept and a lost government policy that wanted to encourage Indian startups in manufacturing? It’s solidly backed by those who want to show the world that India can build world-class systems for manufacturing. Much like the founders of Addverb.

Two years ago, in June 2016, six friends of different age groups - 27-year-old Satish Kumar Shukla, 38-year-old Sangeet Kumar, 38-year-old Prateek Jain, 37-year-old Bir Singh, 33-year-old Amit Kumar, and 32-year-old Neeraj Sharma - decided to leave their corporate jobs at two large Indian companies and to venture out on their own. The six realised that the factories that they worked in were using hardware and software of MNCs for process and material automation.

These MNC products would always require a third-party vendor to integrate an entire material-handling system and the project cost would go into millions, making it very difficult for Indian SMBs to plan any big-ticket expansion. For any SMB, which is Rs 50 crore in revenue and above, needs to plan its capex very carefully.

This is exactly what the six friends did; they democratised access to process automation systems by making them in India and implementing them at one-third the cost.

Satish Kumar, Co-founder of Addverb, says: “We worked together in the plant for several years and wondered how, with our engineering and sales knowledge, we could build great systems.”

Material handling involves preparing the plant for activities that include moving material in a sequence to the next logical step of the production cycle, which involves conveyor belts, robots, trucks, and software systems. All these can be connected under IoT. Global firms spend about $3,00,000 per worker, on an average, to make things completely automated.

Addverb quickly realised that if someone could do this at half the cost and deliver the best of human and machine interfaces, they would be popular company, especially because jobs are still a big feature of the Indian economy.

The company has generated Rs 7 crore in revenue and has an order book of Rs 25 crore. It also has an investment of $1 million from one of the largest shareholders in Asian Paints, to build the business. The six founders began by investing Rs 1 crore of their own in June 2016 to fund the business.

The six co-founders had worked at Asian Paints, at the Rohtak factory, which is the largest paint plant in India. All six combine technical and management expertise. Sangeet studied at IIT – KGPl; Prateek at IIT – Powai; Bir studied at NIT – Jaipur; Satish at TISS – Mumbai; Amit at NITIE – Mumbai; and Neeraj studied engineering at MDU- Haryana. Their common goal was to create and deliver projects in India.

In July 2016, a month after starting up, they won their first project with a large hospital chain to build an IoT computer vision system that could trace dust in bedsheets even after passing them through an industrial laundry service. They increased the dust-free rate from 97 percent to 98 percent.

“That 1 percentile change means a lot for the medical and hospital industry, it can actually save the life of patient from being influenced by dust particles or some microbe,” Satish says.

The team took three months to build this product and used the money from this project to build a Bluetooth-based yard management system for a large electric cable-manufacturing MNC.

“For one year we did not take salaries and our team sacrificed salaries too,” Satish says.

Their work was so well known soon that a C-Suite leader, from Asian Paints, decided to invest in the company. In under one year, the company had marquee clients like MRF, Patanjali, Havells, Megha Fruits, Coca-Cola, Marico, Asian Paints, and ITC.

The company competes with the likes of Automha, Dematic, Honeywell, and Godrej, which are large enterprises that work with billion-dollar conglomerates and their factories.

Badrinath Rao, co-founder of Cattleya Technosys, says: “Startups that focus on automation are able to scale because they come from either working or building technology for that ecosystem. We understood the needs for automation in our ecosystem, which was banking, and that’s why we were able to scale up to large revenues in six years.” He says more startups in the field of automation can emerge from India.

The pricing is based on the value that automation generates. The costing involves a project execution and setup price, after which an annual maintenance cost kicks in for four years.

“We were able to scale up because we did not confuse the businesses with our ability to build automation technology; we spoke about the value that we could drive into client businesses over a period of five years,” Satish says.

According to Markets and Markets, the market for automation will be $239.11 billion by 2023. Factors that are driving the growth of this market include the extensive use of enabling technologies in manufacturing, continuous innovation in industrial robotics boosting its adoption in manufacturing, need for mass production and connected supply chain to cater to the growing population, and government initiatives toward the adoption of industrial automation in various industries.

The 50-member team from Addverb is clearly on the money for making it big in the Make-in-India story, which the government announced in 2016.