Anxiety is the biggest pain point for tech founders, but no one is talking about it 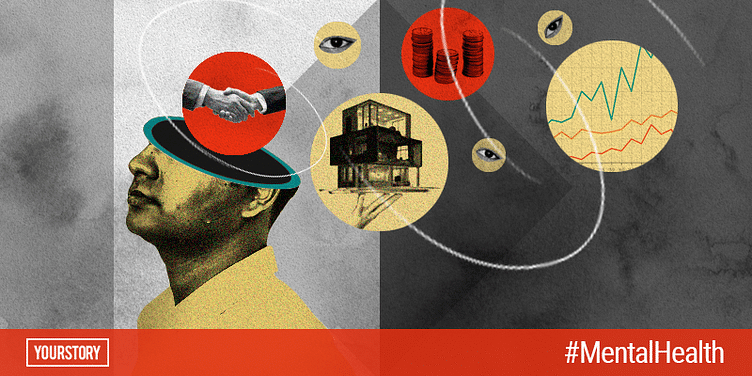 We are living in an 'age of anxiety'. For entrepreneurs, anxiety is fast becoming a silent monster that is creeping in unnoticed. It is time that we wake up to this modern-day malady.

Typically, when a tech founder sends out a note on the internet with the image that says ‘HELP’ written across it, it is generally assumed that his star coder moved to greener pastures leaving him high and dry.

But when you realise why Sanchit Sethi, Founder of StayUncle, choose to put out that image it will cease to be a laughing matter.

“Help!” he wrote, “I have lost the steam.” This confession is like a Harakiri in the high-testosterone world of startups where ‘passion’ is your driving force and hustle your mantra. If you lose ‘steam’ midway, you might as well pack up and go home.

For Sanchit, it started well. “Business was growing 200 percent MOM. In the next couple of months, I had reached places I never anticipated I will reach this soon. All my startup dreams were coming true. I was living the life people desire to live; bigger office, bigger team and great people around. More business than ever flowed in and what not. I had everything around me.”

Except that he realised he no longer had the drive to take his startup forward. “As a founder of a growing startup, I am confessing that I have lost it.”

Heartbreaking as it is, Sanchit’s confession points to a disturbing trend in the startup ecosystem -- the high prevalence of anxiety disorder, which, if left untreated, can lead to depression.

Stress and anxiety are a given in the VUCA (volatile, uncertain, complex, and ambiguous) world of business, and startups are no exception. Even though a startup uses tech to disrupt how their customers engage with a service or a product, the founders (sometimes even startup employees) are increasingly finding themselves at the risk of coming under the wheels of this ‘disrupting’ juggernaut.

“I have (also) started doubting most of the prevailing thoughts in the startup ecosystem,” writes Sanchit. “Thoughts like the need to hustle, the need to not give up, keep failing till you succeed, break things fast and many more. You know where’s it going,” he adds.

So, you have depression?

Manoj Chandran, CEO of White Swan Foundation, a not-for-profit organisation that offers knowledge and services in the area of mental health, says that we carry a lot of preconceived notions about mental health. “We are all experts when it comes to mental health,” he tells me, adding, “and most of it is flawed. If I have pain in my chest, I do not Google about it. Instead, I seek professional help. So why is it that when it comes to mental health we shy away from seeing an expert and would rather seek help on the internet,” he asks, making a point.

Manoj feels that the word 'depression' has become so normalised that even in an urban, youth-centric setting where it is okay to talk about mental health, “we are not discussing it in the context of what we know, but rather saying ‘Oh! you have depression, maybe I have too'.”

He points out that one of the most disturbing data points in mental health is the fact that there is a 90-percent treatment gap, which means even in places where treatment is available, people are not seeking it because of stigma.

Incidentally, India has less than 4,000 psychiatrists, a sad ratio when you compare the number of people with mental health disorders.

Despite the World Health Organisation’s (WHO) campaign last year that encouraged people to “let’s talk” about mental illness, the progress is little and slow. According to WHO, 322 million people worldwide are living with clinical depression, one of the most common mental health conditions. "Nearly half of these people live in the Southeast Asia region and Western Pacific region, reflecting the relatively larger populations of those two regions (which include India and China, for example),'' said the WHO report.

A National Institute of Mental Health and Neurosciences (Nimhans) 2016 survey states that “an estimated 150 million people are in need of mental health interventions and care (both short term and long term) and considering the far-reaching impact of mental health (on all domains of life), in all populations (from children to elderly), in both genders, as well as in urban and rural populations, urgent actions are required.”

Ashwin Naik, Resident Fellow & Leadership Group Member, Ashoka, and Co-founder of Vaatsalya Healthcare, Seraniti, DisruptHealth, and Operation Resilience, says, “ I have gone through my own struggles with anxiety and stress during my stint as an entrepreneur. I think two things clearly helped. First, getting an executive coach to work with me to get me to focus on what is important and how to manage my emotions. Second, having peer support. We had a close group of four entrepreneurs who used to meet regularly to talk about things, take the load off and just listen to each other.”

He adds that exercise and yoga helped too. “I started running when things got really bad and that helped to take the stress off of my mind and shift the pain to the legs,” he tells me.

There’s perhaps no one on this planet who has not experienced stress and anxiety. However, prolonged periods of stress and anxiety without any intervention can have disastrous effects. Pointing out that we are living in an "age of anxiety," Dr Shyam Bhat, well-known psychiatrist and integrative medicine specialist, says, “Anxiety has always been more prevalent than depression and this is even more so in today's fast-paced world.”

A Times of India report, quoting a study by The Lancet, says that “the burden of anxiety disorders is growing across India, and that it was among the top 10 causes for morbidity in India in 2016 (in terms of years lived with disability). In 1990, anxiety disorders were in the 40th place as a contributor to disability-adjusted life years (DALYS, WHO’s special scale to measure the loss of ‘healthy’ years), and it climbed to the 26th place in 2016.”

In an email interaction, Sanchit tells me that he has started meditation and is in the process of building a new routine to take his startup forward. Explaining his feelings earlier, Sanchit says that “every day had become a burden. There was no motivation to get out of bed. I started waking up at 10 am first. Then my wakeup time shifted to 10:30 am, then 11 and so on. I saw myself slipping away into laziness and many addictive habits.”

More than just having a bad day

Urvashi Goverdhan, actor and blogger, also ‘came out’ on the internet recently about her battle with mental health. Diagnosed with Borderline Personality Disorder (BPD), Urvashi says she has been fighting anxiety as long as she can remember. “I have been seeing a therapist on and off since I was 14. When I was in college, I assumed it was the stress of studies and it will go away. When I started working, I would tell myself it was the stress of being stuck in a job that I did not like and it will become better. But when I was doing what I wanted and liked, my condition still did not change,” she tells me.

Urvashi, who is on anti-depressants, reveals that the cause of her anxiety was around the fact that she was not making enough money and wondering whether her career choice was the right one. “I was blind to all the achievements I had had. My day would always end with this sense of defeat.”

Though Urvashi was brave enough to seek professional help, many live in self-denial. 'This too shall pass' and 'I can cope with it', are often lines used to pick oneself from what many believe is just another bad day. “When I would tell my friends about my mental health struggles, they found it difficult to believe. But you are such a happy person, they would say,” Urvashi tells me.

So how does one know the difference? How do you know that it is time to seek professional help?

Manoj says the best way is to take what WHO defines as mental health as the benchmark. It defines mental health as “a state of well-being in which the individual realises his or her own abilities, can cope with the normal stresses of life, can work productively and fruitfully, and is able to make a contribution to his or her community.”

It is as Urvashi says, “You think we have not thought about picking ourselves up and cheering up? No one wants to be depressed. If positivity could heal, then why would anyone go to a doctor to get a bone fixed.”

Talking about the increased incidences of depression (mostly due to the high-stress lifestyle) now than it was even 10 years ago, and whether people are more willing to come out and speak about their struggles, Dr Shyam says, “It’s probably a combination of both increased awareness as well as increased stress leading to depression. Like so many other illnesses, stress increases the risk of developing clinical depression.”

ALSO READ: Is depression a well-guarded secret in the startup world?

He feels that stigma and misinformation about mental illness, including depression, continues.

At his centre at Seraniti, Dr Shyam helps individuals by integrating insights from Eastern and Western psychotherapy to meet the challenges of living in the 21st century. Over the years, his team has counselled many from the startup world and the reasons are not very removed from what Sanchit himself was struggling with -- losing his drive, a byproduct of high stress and anxiety.

Typically, according to the Seraniti team, these are the problems that cause stress and anxiety among entrepreneurs:

Interestingly, the team found that for some of the cases having a startup and the meaning attached to the startup has helped individuals come out of depression. It adds meaning and value to their lives. “The motivation to start also stems from personal meaning and values given to productivity and work. To create something where they can work with a higher sense of autonomy, apply creativity to their work, which they can't do while working in larger companies with rigid directives/deliverables.”

As Sanchit tells me, “What I have started believing is that we can achieve a lot more by doing a lot less. And the whole process of building a business (in fact, living as well) is supposed to be an easy process naturally. Obstacles on our way and the need to hustle are a sign of our misalignment.”