With an AI voice assistant, BuzzOpinion aims to get a headstart over Amazon Alexa in India’s vcommerce race 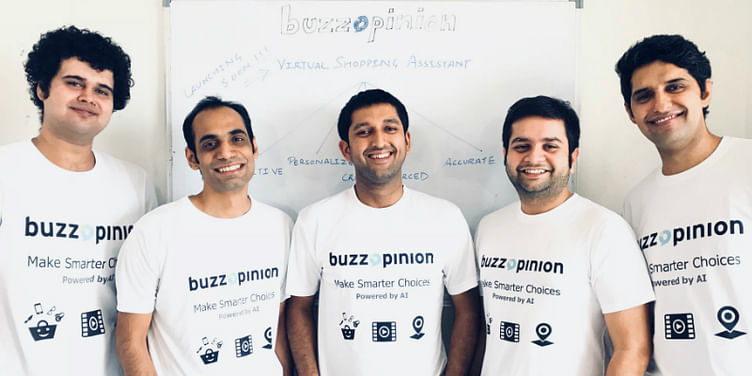 Based in Mumbai, BuzzOpinion is Vivek Arya and Anand Ramachandran’s second startup together. Speaking to YourStory about how BuzzOpinion came about, Anand recalled that in mid-2015 he was looking to buy a smartphone., and during his research, came across a number of reviews and opposing perspectives. In the end, he realised that he was more confused than when he had started out.

Vivek and Anand had earlier co-founded MakeSense Technologies, an AI engine that matched jobs and candidates, that was later acquired by Naukri.com (Info Edge India Ltd), India's largest job portal. Its algorithm would go through resumes, extract key skills and keywords and grade candidates on those skills.

They launched the platform to the public about six months ago and more recently in March 2018, launched an AI-powered Voice Assistant, Buzzo, which the team believes is India’s first AI Voice Assistant for shopping. Here is BuzzOpinion’s story.

Vivek started his career as an analyst with Deutsche Bank and went on to work on the integration of the semantic search and match technology developed at MakeSense, into various Naukri products, after its acquisition. More recently he shifted into the role of an independent consultant with Info Edge India Ltd, as he began to work on his second venture with fellow IIT Bombay alumnus, Anand.

Anand too had made a similar shift and moved to an independent consulting role with the Data Sciences team after working as an Associate Vice President at Info Edge, for a couple of years.

BuzzOpinion's goal was to draw on publicly available information and help customers make informed decisions without having to deal with an information overload. BuzzOpinion does this by helping customers gain insights from aggregated product reviews. Anand noted,

The whole concept is that BuzzOpinion is a blend of your closest friends, who know you inside out and also has the wisdom of the crowds. It reads almost every opinion on the web and provides recommendations for your needs and preferences.

Anand and Vivek had previously worked on solving a similar problem statement at Makesense, matching jobs and candidates with AI. Anand cited the example of a student who learnt graphic designing at college. Talking about their approach there, he said,

We gave every candidate a score by determining how much of their current project is related to graphic design, what other related terms have they have mentioned, such as Photoshop, Corel Draw etc.

So for BuzzOpinion, they began building a vocabulary so that algorithms could understand queries related to ecommerce goods. They worked on the backend technology and fed it data for about two years. Forward to 2018, BuzzOpinion now claims to have a growing vocabulary of over 50,000 concepts, and a near human understanding of the relationships that define human decisions.

Apart from the founders, the BuzzOpinion team currently comprises three employees and engages with five to 10 freelancers, based on their needs. Vivek distributes his time between product ideation, text processing algorithms, software architecture design, and hacking in Python. Anand’s expertise lies in conceptualising and developing semantic technology products that can extract structured information from free text, by using natural language processing and text analytics.

How BuzzOpinion works and generates revenue

BuzzOpinion’s recommendations are powered by complex NLP, sentiment analysis and statistical inference algorithms. It does this by reading each review on the web and classifying the text mentioned in the review as pros or cons depending on the words used.

Then it computes and assigns a reflective statistical rating between 1 (terrible) to 5 (awesome) for each aspect depending on what percentage of reviewers mention it positively or negatively compared to category averages, and the specific words they use.

While electronic devices are the first category they launched and the biggest focus, BuzzOpinion currently offers a recommendation feature for other categories like movies and TV shows. It also has three categories in beta.

BuzzOpinion monetises its platform through affiliate revenue that it earns from products that are bought on the platform.

Anand noted that while the platform wasn’t generating direct revenue from the movies and TV shows categories, they didhelp with user retention and also train their algorithm. They may look to monetise this section with targeted ads in the future.

Anand explained that customers could trust their ratings as they are based on statistical analysis of genuine user reviews and hence unbiased.

As for identifying and discounting fake reviews from their ratings, Anand noted the NLP algorithm is able to identify patterns and flag reviews that were likely to be fake. “This is a continuous focus area and is always a ‘cat and mouse’ game as fraudsters keep changing their tactics to avoid detection.

BuzzOpinion’s recently launched voice assistant, Buzzo, is currently operational on its website and also mobile browsers. It can answer queries such as ‘best smartphones under Rs 40,000’ or ‘smartphones with best battery life’ and then engage in a conversation with the customer about their custom preferences.

While the visual user interface (UI)) and user experience (UX) is still a work-in-progress, Buzzo works and can recommend products and answer basic queries. Going forward, Anand informs that Buzzo will also be able to respond to specific product queries like ‘does Honour 6X have dash charging?’

BuzzOpinion has seen about 50,000 visitors in six months and has so far clocked Rs 80 lakh in GMV.

On the global front, a new category of online commerce called Voice commerce or vcommerce is emerging. According to a study by Adobe Digital Insights, 22 percent of voice assistant owners reported that they shop using voice commands (e.g., re-orders, shopping lists). Amazon’s Alexa and Google Assistant are some of the popular players in this space.

While the Echo is available in India, vcommerce is not yet live on Amazon India. BuzzOpinion is also looking at the B2B route as a possible revenue stream. They could partner with an ecommerce player like Flipkart and deploy the platform at their end. He said,

Our voice assistant will make sense of the data(user reviews etc) that they have and provide recommendations to customers.

But this results in a walled garden as the voice assistant will only look at data from that specific ecommerce platform. Hence the founders are also optimistic about direct consumer play, where consumers can get recommendations from public data collected across multiple channels.

Bootstrapped with the founders’ savings from their previous exit, they are now looking to further refine their product more and also bring investors on board who could help them understand whether the B2B or B2C strategy or both have a bigger opportunity.

Anand says that their philosophy is ‘India first’ and the goal is to build in India and then expand to other international markets. In the next iteration of their platform, they aim to add another layer to their rating system by factoring in reviews by experts in different fields. Anand said,

On the plus side, experts go more in-depth with their reviews. On the flip side, most experts share reviews after short durations (few days to a week), while the general public generally share reviews after a longer time period (few weeks to a month). So there is a need to factor in both and provide a weighted review system.