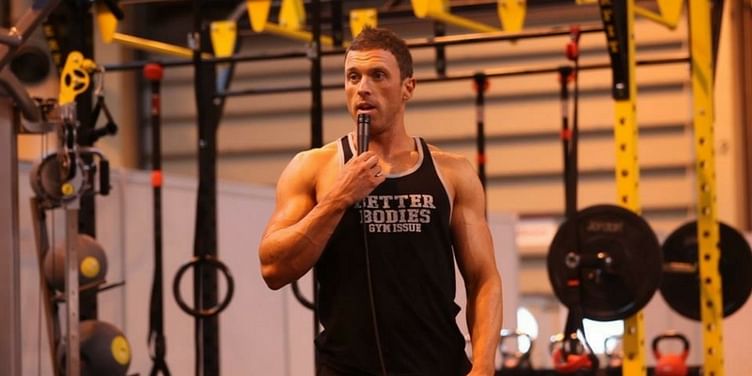 From growing up in Ireland to becoming a trainer with clients across the world, Billy Garnon opens up on how he rejigged his personal training career into a personal development coaching brand.

Billy Garnon hasn’t had it easy. But he’s managed to browbeat the odds and script a success story that’s awe-inspiring. Billy, who started his health and fitness career in Ireland at the age of 16, is now an extremely familiar name in the world of health and fitness.

Billy grew up in Northern Ireland and comes from a single-parent family; he grew up with an older brother and sister whom he loved dearly but doesn’t have too many memories of now. At that time, Northern Ireland was war-stricken and divided by religion and politics, he recalls.

When Billy was six years old, he started gymnastics with his uncle as his coach. His uncle would take him to practice every day after school and let him sit on the mats and watch. He was shy and never paid heed to his uncle exhorting him to join in. Until the day his uncle didn’t ask him to join in. Since then, Billy never sat back.

Billy was a class prefect for many years, but that didn’t inspire him to study harder. He was always into sports and action.

"I would rather spend three hours running around the streets, playing with my friends and train twice a day, six days a week, than attend my teacher’s lectures that homework was due the next day."

Fitness and training came easy to him, he says. "I preferred to train for six hours a day rather than sit in front of a mathematics book that tried to explain the square root of pi times eight. Please don't ask me to work that out because I still wouldn't know," he laughs.

At 16, after high school, he had a few options to choose from: he could study further, become an apprentice, or start working.

Deeming further education pointless due to his lack of interest, Billy says apprenticeship was a go-to option for boys in Ireland because it taught tools and trades to find jobs in fields like plumbing and electricals. But he didn’t want to go that way.

"I was raised by my mom; work is all I knew and saw from her. It was how we got money. She would ask me, ‘You're going to go to university, aren't you son?’ I'd be like ‘Yes, Ma’ without really knowing what the hell university was," he recalls.

At 16, he joined a soccer programme that let boys continue education in sports management (which he says he had no clue of). He chose a local gym in his hometown; his story started from there and he stepped into the world of personal training.

Billy thought he wasn't educated enough to be a self-made entrepreneur. He remembers asking people how they started and hating it when someone said, ‘You just start!’ He credits his mother for being his inspiration.

"My mom is my inspiration to be a better human each day and a reminder that I can do everything that she didn't get the opportunity to do. She's always pushed me to do whatever I liked," he says.

Initially, Billy worked with clients who paid him a personal trainer fee. He lived within his means, put a little of his weekly earnings into courses and education, and a little into marketing. As he grew in popularity with his result-driven model, he continued to do the same in whatever country he was hired in.

"You'd be surprised what you can start with very little money and zero dollars in the bank. Over the years, I made smart and bad decisions financially but the model was always the same. I give you health and time, two things you can't buy more of, but can invest in when you have more of."

When he figured out how much money he needed for basic living, Billy used the additional money to make smaller investments in gyms, food, products, and service providers.

Since then, Billy has turned his personal training career into a personal development coaching brand.

"Personal training and development isn’t just about walking around a gym floor, making you do alternate movements in a planned manner, or reading some self-help books; it's more than that," he says.

"The difference isn’t simply understanding the clients' physical need for change and altering it for a specific date, but their overall need to grow and reinvent themselves physically and mentally while working towards their personal growth daily," he says.

Talking of his failures, he shrugs them off.

"My failures? I don't think you have enough text space. My failures have come by the dozen; small or big, they've come often. But it's only when we realise that all our success and failures are our own and accept them can we move forward. There is no one else to do it but you."

Billy’s clients are categorised into different personalities; this tells him a little about their priorities in the first few interactions. He says it is amazing what people can tell him about themselves, either verbally or with their silence. Based on their needs, he figures out which one is top priority.

Eighty percent of his clients approach him because they want a change in appearance, weight loss, or more muscle. It is his job to find out why. The awareness about personal health and physical appearance directly attributes to the will to be one's best, to look best, and feel best. Billy’s primary approach is to tap into the finer details of a client’s appearance, aura, and communication skills.

"I am not just your personal trainer and nutritionist; I am your go-to guide for everything," he says.

"Anyone who works for themselves initially has no work-life balance," Billy says.

When exclusivity becomes a defining attribute of a business and if clients need it, work-life balance takes a back seat. If a celebrity has three months to get fit for a movie role or if a business client needs the trainer to travel with them for the entirety of the work programme, time and schedules are certainly compressed.

"Challenges do arise if our coaches face difficulties with family commitments and obligations. But we try and deliver. My staff might be doing good work but when the time period comes to an end and if the clients want to extend their exclusive duration, it can be a challenge to allocate someone for the additional time," he says.

Billy once believed that social media influencers could lead him forward, but now feels he was mistaken. He says that he figured out the right market direction a couple of years ago. His team now spends less money and time on social media platforms for marketing, and more time on client interaction and development.

The word-of-mouth recommendation has become Billy’s best currency and attribute.

"I decided I wanted to be a good coach to my clients and that alone paid off."

With physical fitness arriving right in our hands in our smartphones, the fitness industry has come a long way. Lifestyles are getting more hectic and are moving rapidly, and so health conscience is getting traction physically and virtually as well.

In India, the total retail market for fitness as a category is valued at $908 million in 2018, and the revenue is expected to show an annual growth rate of 9.3 percent, resulting in a market volume of $1,296 million in 2022, says a report.

Billy's team is spread over the Middle East, Asia, the UK and North America, and he is now looking to grow in India.

"It really is very exciting and I cannot wait to help, change, and influence the mindset of influencers," he ends.