From harvesting social media profiles to harvesting nature's bounty, this founder is using data where it matters 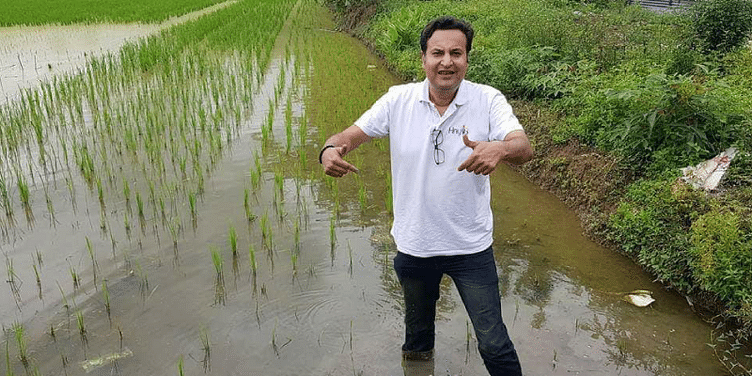 Deepak Pareek of MyCrop is using big data for farmers in India and Indonesia to reach bigger markets.

Year it was founded: December 2016

Where is it based: Ahmedabad, Gujarat (India) & Medan, North Sumatra (Indonesia)

The problem it solves: Uses big data for farmers in India and Indonesia to reach bigger markets

It is just as well that Deepak Pareek sold off his social media data and analytics company two years ago. His HnyB Technologies was mining data by managing 30 different social networks for enterprises. Today, as CEO and Co-founder of MyCrop Technologies, he is using big data so that farmers in India and Indonesia can reach bigger markets.

You can say that from harvesting social media profiles, he has moved on to using data for harvesting nature’s bounty.

“There were certain issues related to my earlier business and I had to sell it off,” says Deepak. But with the recent Cambridge Analytica disclosure still fresh news, it is hard not to linger a bit longer on the ‘harvesting social media profiles’ aspect.

“This is nothing new,” he says, adding, “Social media has always been used for someone’s benefit. Remember, the Maggi noodles episode? When it was banned because of a backlash on social media, someone benefited out of it.”

In Deepak’s opinion, “Facebook has been doing this for long, and it is we who allow them to do so by accepting their terms when we sign up. They are making money from where they should.”

It is no denying that data is gold. But like the proverbial knife that is used for a different purpose by a butcher and a surgeon, data too becomes ‘ethical gold’ if it is used to benefit the society at large, rather than warm a few pockets.

While on one of his international trips, Deepak got an opportunity to use his data skills that would benefit farmers. He started MyCrop in Indonesia in March 2017 to assist rice farmers with predictions about their yield and choice of markets.

“We choose Medan in North Sumatra as we thought we had better chances of success because of the good soil quality and rainfall,” he tells me, adding, “We had fewer parameters to play around with to test our algorithm unlike what we would find in India.”

Once they were reasonably comfortable with their tech product, they came to India and set up shop in Hadiyual village in Gujarat in August 2017.

With a foresight enabled by data, Deepak predicts that we are staring at a difficult summer. “The cultivable land for summer crops has reduced by one-fourth. The costs are going up for a lot of commodities because of water scarcity,” he says.

It will not be a surprise if the price of tomatoes goes up to Rs 90 this summer.

This is a data problem, too. “If the farmers are provided with enough relevant data on when to grow which crop then we would not have the same crisis every year that we have with prices of potatoes, tomatoes, and onions (POT),” he says.

Deepak says, “Today we see agrarian distress across the developing world, especially in South Asia and Africa. Most of these economies have a majority of farmers having smallholdings (less than two hectares). There are more than 2.5 billion smallholder farmers across the globe.”

Smallholder farmers are disadvantaged due to lack of resources, no or limited access to technology, and the whole agriculture ecosystem in these economies is plagued with inefficiency, both on input supply and output markets, lack of data (farm/farmer level) and opaqueness in transactions. “As a result, farmers only get less than 10 percent of the total economic value they create,” he adds.

Explaining the unit economics, Deepak says, “Per farmer revenue earning from various revenue stream would be around $16 with the intent to reach five million farmers in the next five years."

The startup hopes to cross a revenue of $20,000 this financial year.

MyCrop has a team of 20 plus full-time employees and uses the services of what they call ‘Farmer Mitras.’ These are people who are either farmers themselves or are those connected to small farmers. They not only evangelise the work by MyCrop but are also entrepreneurs in their own right.

Deepak says that they get paid by MyCrop for the services rendered and also earn commision on products sold to farmers.

“Smartphone penetration is less than three percent in rural areas of South Asia thus posing a challenge for promoting technology solutions. We faced this challenge and came with an innovative solution to reach more farmers by delivering our services to farmers in two modes: First, using mobile application for farmers for those having smartphones. Second, through a village level entrepreneur called Farmer Mitra, who acts as a community manager in the village we operate in and he becomes the gatekeeper to deliver MyCrop to enrolled farmers,” informs Deepak.

Farmer Mitra is equipped with a tablet with the MyCrop application and is trained to serve farmers without smartphones using personal access.

In the next 18 months, MyCrop is targeting to complete its first phase of operations by training 1,000 plus Farmers Mitras serving 4 lakh plus farmers and enrolling 30 plus platform participants.

According to Deepak, meeting more than 1000 farmers and understanding the way they work has been a humbling experience. “MyCrop was able to increase the income of farmers by 34 percent in its first season. This has reiterated my belief that technology can empower those at the base of the pyramid,” he says. And if he still has doubts, he just needs to go back to when he met Microsoft’s Bill Gates where he told him, “I envy what you are doing.”