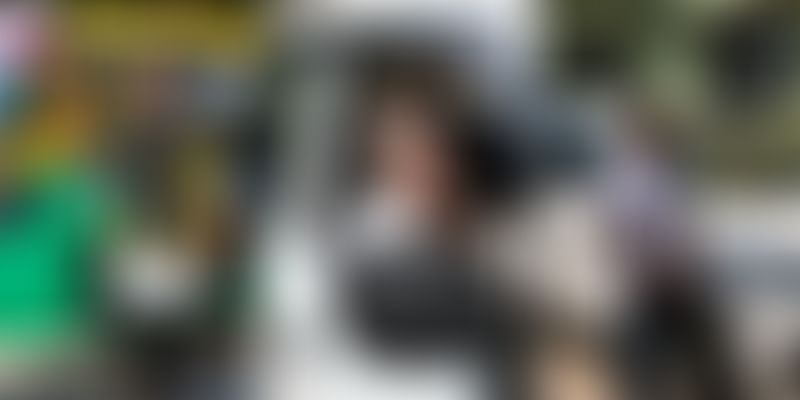 With greater autonomy over their schedules and a handsome paycheque at the end of month, Noor Jehan, Mehjabeen, and Ganga are trashing away taboos around women driving cabs and taxis.

HerStory was in conversation with three women drivers from Ola — the India-based cab aggregator service — who are now happy micro-entrepreneurs making a stable living by driving the company's vehicles.

Ola's insurance policy, 'Chalo Befikar' covers them and other driver- partners with a sum of Rs 5,00,000. Aside from that, flexibility in working hours is helping these women enjoy a better work-life balance.

"Growing up, I had only male friends and watching them drive inspired me to learn. A part of me also wanted to show them that I could do everything they could. Eventually, my husband taught me how to drive," 34-year-old Noor Jahan remarks as she speaks on how her life had taken a U-turn, after she joined Ola as an auto driver.

Noor used to work for a private cab company earlier. The hours were long and timings were rigid; it was difficult for her to spend time with her children. Despite working with the company for many years, she says there was no flexibility in the working hours or increase in income.

"I had to put up with an uncomfortable culture and discrimination from my male colleagues. I felt that it was a part and parcel of the job but, everything put together, I had had enough and decided to quit. Besides, I wanted to do so much more with my life that a rigid job would not permit."

She heard about Ola from a friend of hers who told her that the company had flexible work hours and provided complete autonomy over the schedules. After hearing that the work environment was supportive and the company would even assist her financially if need be, she felt it was an attractive proposition.

She had her hesitations, given her past experiences; yet she chose to take a leap of faith.

She also learnt to drive minivans, autos, two-wheelers, cabs, and even buses. Noor's extended family does not approve of her career choice as they feel that it is not an appropriate thing for a woman to do.

"However, my friends and immediate family and the community have been very supportive. In this respect, I feel like I am contributing to changing the mindset, and hopefully, more women will follow suit. I do not want my children to face the same difficulties that I did. I am therefore trying to set for them an example of a confident and independent woman."

She decided to sign up with Ola, not with a cab but with an auto. "Autos are very popular and in demand in Bengaluru and I felt that I would be able to earn well with Ola Auto," she said.

Noor now has ample time to pursue her passions such as running her own driving school where she teaches 25 students how to drive autos, bikes, and cars.

Aged 42, Mumbai-based Mehjabeen tried her hand at a variety of businesses before joining Ola. She worked at a garment factory and ran a tiffin service. However, these jobs did not meet her needs and involved long hours. In spite of putting in more hours at work, the satisfaction was limited. With a family of four to support, she had to find a better fit and a sustainable means of livelihood. To provide her children with a better quality of life and education, she wanted to explore other opportunities.

Running a tiffin service and working in the garment business are jobs considered more suitable for women as opposed to driving a cab, yet they did not prove to be as lucrative for her. "I faced difficulty in scaling the businesses as well as in getting the return on the money invested. Most importantly, I found that the effort was not worth the returns," she said.

She learned driving at a training school and received additional training facilitated by Ola, as a driver-partner. She says she always had a passion for driving as it gave her a sense of independence; hence, she took this up as a profession.

Talking about her stint at Ola, she said,

"As per my daily routine, I do the housework during the day and drive with Ola at night. I have flexible work timings, can log on and log off the app as per my choice, and the customers I receive bookings for, have been appreciative and supportive of me."

With a family of four that includes two young children, she looks after them and the household chores throughout the day.

"I usually drive Ola during the night. I find this to be the best suited time since the city roads are not congested while demand is always there in a city that never sleeps. My husband has supported me throughout this journey and is proud of my achievements," she said.

"I am now able to send my children to English-medium schools and encourage them to aspire and dream big. I also believe that there is no job that women cannot do if they are strong-willed and determined."

"My husband works with the mechanical engineering department in the Railways. Initially, he was hesitant towards the idea of me driving a cab, for he said it's not the job of a woman. He now understands and supports this decision."

Ganga works for a maximum of 12 hours every day and works night shifts during Saturday and Sunday. She purchased the vehicle on her own, with a bank loan. As of today, she has paid all the installments and cleared the bank debt.

She is a mother of two children — a son and a daughter who study in Class VII and Class IX, respectively. Right now, she says, she is able to earn much more than before, and at the same time, is able to manage things at home and spend time with her family.