These seven women from the Northeast are champions of social change 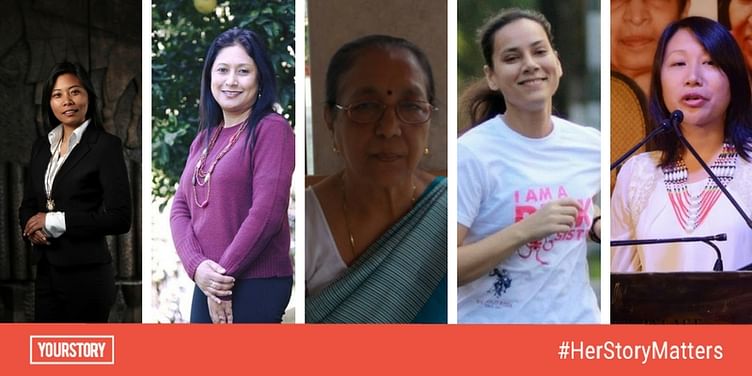 Be it the courageous IPS officer or the women working to empower the youth and women, these seven women from the Northeast have taken the road less travelled to emerge as role models.

The Northeast might be culturally and ethnically diverse, but one factor that unites the region and separates it from the rest of India is the status of women here. Social practices such as dowry, female foeticide, honour killing, and child marriages are rare in the Northeast. And despite the region long being a conflict zone and displacements of several communities being common, women in the region are leading the change.

Ahead of International Women’s Day, we list down the stories of women who are working to uplift a lot of other women. These seven women from the Northeast have taken the road less travelled to emerge as role models for their peers and the youth.

Hasina Kharbhih is the Founder of Impulse NGO, a network that has been fighting against the trafficking of women and children from Meghalaya. For 30 years now, she has been working to create sustainable life-enhancing opportunities and a safe environment for women and children in the Northeast. “I strongly believe you cannot end trafficking of women and children, until women at the grassroots are skillfully empowered and economically self-sufficient,” she says. Hasina has been awarded the Japan Socialist Activist-a-Award and the GDN Global Development Award for her contribution in combating human trafficking.

Delhi-based lawyer Hekani Jakhalu resigned from her high-paying job and in 2006 founded YouthNet in Nagaland to help empower the youth. A turning point came in Hekani’s life when she saw youngsters from the Northeastern states of the country move to other areas due to the lack of employment opportunities in their home states. That’s when she chose to quit her dream job and start YouthNet with a group of friends to enable a better future for the youth.

Known as the Iron lady of Assam, Sanjukta Parashar is the first woman to be have been appointed as an IPS officer in Assam. She has arrested over 64 militants and taken down 16 of them. She has also seized tonnes of arms and ammunition. Sanjukta is known to be a dedicated and courageous officer, best known for fighting terrorism and corruption.

Quitting her high-paying job, Nisha joined her father, Mahesh Bora, in his endeavour Elrhino in Assam. Elrhino is involved in paper-making from the rhino’s dung. With Elrhino, Nisha aims at generating livelihoods and saving rhinos. She says, “Elrhino’s gotten so huge; we really think this can impact the future of the rhino with all the love and attention we’re receiving.”

In 1998, Lakhimi Baruah started a cooperative bank for women – the Konoklota Mahila Urban Cooperative Bank in Jorhat, Assam. The bank is for the underprivileged women in the Northeast. The bank, which has only female employees, was started with an initial seed capital of Rs 8 lakh. KMUCB currently has more than 34,000 accounts with a working capital of over Rs 13 crore.

Temsutula Imsong, 34, is the Co-founder of Sakaar Sewa Samiti. Temsutula, who hails from Nagaland, is well known for cleaning the Varanasi Ghats in just three days under Mission Prabhu Ghat. Prime Minister Narendra Modi tweeted about her and her team’s effort to clean the ghats. He also spoke about her at his address in Toronto during his three-day visit to Canada last year.

Alana Golmei is fighting discrimination in major Indian cities against people from Northeastern states, with her private helpline for Northeastern people called the North East Support Centre and Helpline (NESCH). Alana, a PhD in political science, runs NESCH on a voluntary model; it is entirely funded by volunteers since 2007. It has handled around 600 cases of crimes against people from the Northeast, including harassment at the workplace, assault, and rape.