Be clear of your startup's culture to make a lasting impression: startup mentor Sanjay Anandaram 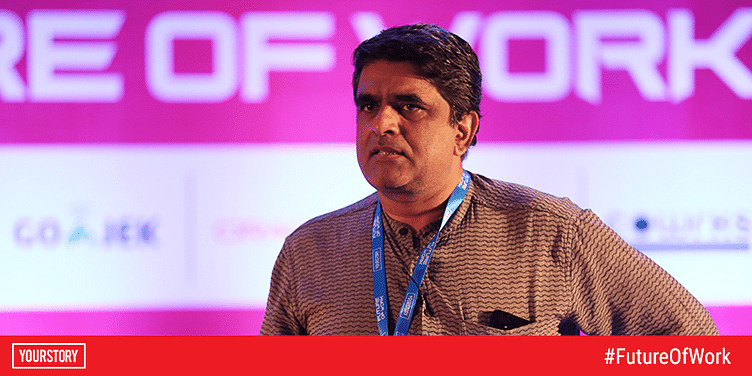 At a time when there are startups that boast of a new-age, aggressive work culture, startup mentor Sanjay Anandaram asks founders to decide which culture fits their business model.

Talking about the diverse culture that is prevalent across different companies, Sanjay Anandaram, startup mentor, advisor to funds, companies and organisations, says that while there is no right or wrong, good or bad culture founders have to be clear about what their aspirations are.

But, Sanjay, who is also an ambassador at software think tank iSpirit, added, “It's ultimately the culture of the company that makes it what it eventually becomes." At a time when there are new startups that boast of a new-age aggressive, sometimes alpha male and sexist culture, Sanjay asks founders to decide which culture fits their business model.

Addressing young startup founders at YourStory's Future of Work conference on Saturday, Sanjay said, “Ask yourselves what kind of company you have. Are you one that encourages dissent, sharing and collaboration and allowing people to make mistakes?”

Citing a good example of collaborative culture at the workplace, Sanjay recalled the anecdote of the initial days at Yahoo, when the roof leaked in its office, and employees brought in buckets from their homes. He advocated founders ask themselves some pertinent questions, such as, 'Who are you?' 'What do you stand for?' 'What is your belief system?' 'Do you actually believe in anything at all?' and 'Why should you?'

"Ask yourselves all these questions, because all this will translate into culture. Every single line item translates cumulatively into culture,” he added.

Sanjay spoke at length about how a feature is not a product, a product is not a business, a business is not a company and the company is not the organisation, and what it changes as one moves along the axis.

Companies that have a formidable culture are the ones that actually call themselves an 'organisation'. When you meet a person from such an organisation anywhere, you know they belong to that company within five minutes. The brand stays with that person and with the outside world even decades after that company ceases to exist. That is culture.

Referring to Tier I companies like Infosys, Reliance, Tata and others, he said, “It’s the image that comes up in your mind as soon as someone takes their name. That is one manifestation of culture. Culture is nothing but the aggregate, the sum total of beliefs, practices, rituals, styles of working, interactions, and the treatment of not just its people, but its suppliers, investors, customers and board members."

Sanjay spoke about his experience during his days at Wipro. “One thing at Wipro was absolute integrity at any cost. It doesn’t matter whether you lose business. There was no question of compromising on integrity. It was a clear message that the company wanted to send to its employees." He added that even after several of his colleagues left Wipro and started many firms, that culture was passed on their respective firms.

It is a different thing to have a poster hanging in the boardrooms of the company that reads 'respect people' and talks of integrity, but it is another thing to practice it, Sanjay said.

There are times when a company is severely tempted when there are decisions to be made about businesses and revenues. “It is the fibre or culture and DNA of the company that will determine what the decision of the company should be at that point of time," he added.

Speaking about different cultures prevailing in today’s companies, Sanjay said, “At some companies, the personality of the founder is imprinted on every single activity of the company: dressing style, micro-management, working late at night, and not a single decision being made without the consent of founder. Then there are other cultures where there are very collaborative working styles, sharing of information, allowing people to make mistakes and learn. There is no right or wrong, good or bad culture."