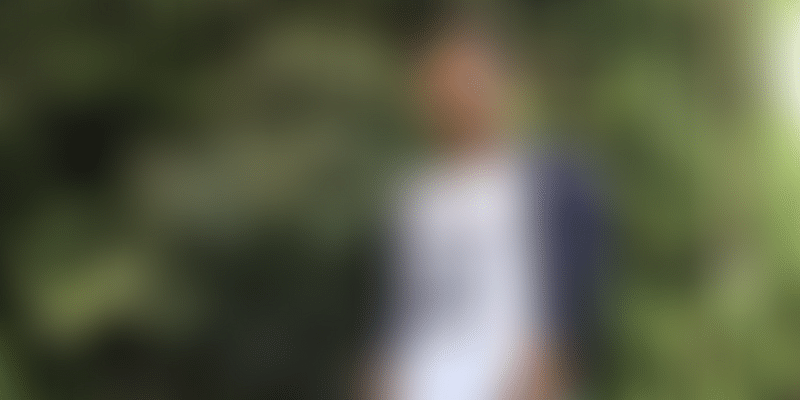 A former mechanical-engineer turned businessman talks about his journey from Thiruvananthapuram to Glasgow and back, and how he fuses his passion for nature aquariums, and love for nature to run his quaint little haven for urban nature enthusiasts. This is his #PassionToPaycheck story.

Vincent Ambrose has a natural affinity towards animals and plants.His excitement is palpable whenever he talks about his love for gardening, a childhood being surrounding by pets, and his love story with nature aquariums.

A connection rooted in childhood memories

“As far as I can remember, we always had pets. The first was a cross-bred dog named Rosy. We had budgerigars, squirrels, fishes and rabbits.” By the time he was in college, he had African lovebirds, Java Sparrows, Diamond Doves, Zebra Finches, Bengalese Finches, Cockatiels, and even a rescued Eagle as pets.

After obtaining a degree in Mechanical Engineering, he joined his family’s retail business in Thiruvananthapuram. But he always ensured that he spent enough time with his large family of pets. “I had to open the family-owned store by nine in the morning, but I would be up by six to tend to my pets. And most Sundays were entirely dedicated to cleaning and grooming them,” he reminisces.

But after three years, he had to move to Mumbai for his first job at Sitel. And, then three years later, he went to Glasgow to pursue a diploma in ITES (Information Technology Enabled Services Operations and Management.). During this period, his hobbies took a backseat. “There was hardly time to think or do anything else,” confesses Vincent.

One day, strolling through the streets of Glasgow, he saw something he’d never seen before – a beautiful nature aquarium. “It looked like a scoop of river bed was placed inside the glassed box. It had a beautiful landscape and fishes swimming away gloriously. Just watching it felt like meditation.”

That was the beginning of his love for nature aquariums, which has now become a lifelong passion. “Mention aquariums and you think of a glass tank with water, a few colourful pebbles and some aquatic plants and fishes. But nature aquariums are all about recreating natural landscapes within an aquarium using live aquatic plants, rocks, driftwood etc., and turning it into a self-sustaining underwater ecosystem. So you can imagine how vibrant they are,” exclaims Vincent.

He explains that in addition to being a piece of living art, nature aquariums are known for bringing emotional and health benefits and instrumental insignificantly reducing stress and anxiety. However, he does admit that they can be a challenging concept for the uninitiated or someone who isn’t a nature enthusiast. “The plants require lights, carbon dioxide for photosynthesis and adequate nutrients for them to grow well. Any imbalances in these will create an imbalance in the entire aquarium leading to its destruction. Soit needs a lot of dedication and care. But once you get the basics right, it doesn’t require you to spend more than two hours on it once every fortnight.”

Vincent was hooked on to the concept from the very moment he saw it and began studying up and researching on nature aquariums. This continued even after he returned to India and joined an ITES startup as an Operations Manager. “I consciously began devoting time to set up a nature aquarium and in two years, I had nine of them at home. I actually began with the idea of setting up one tank, but the multi-tank syndrome got the better of me, and I ended up building nine tanks.”

But then, another hiatus came along, albeit a temporary one. Vincent had to relocate to Bangalore to invest and join a friend to run a chain of restaurants. Four years later, he was back to Thiruvananthapuram to take care of his aging parents.

Back in his hometown, his interest in plants got him connected to nature enthusiasts. “In 2014, I started Sreepadma, an online business of selling aquarium plants in association with a fellow enthusiast who had an aquarium plant farm in Alwaye.Today, it is the largest wholesaler of aquarium plants in India. We ship live aquariums plants all over the country and sometimes even overseas.”

But, at the back of his mind, he says he felt the need to find an outlet to showcase his passion for animals and plants, and in particular nature aquariums.And, when he met hobbyist coupleVinod Mathews and Santhy Ann Mathews, an architect and a landscaping expert with similar interests, the trio contemplated if they could make a living out of their shared passion for nature. “Many chais and conversations later, we decided to open Forest Vibe,” says Vincent.

Forest Vibe: Catering to the urbanites love for green spaces

Started in August 2016, Forest Vibe is a home and garden store with vertical gardens, framed gardens, terrariums, vivariums, paludariums, tropical plants, succulents, planters, pots and nature aquariums. In short, a haven for people who love nature. The store itself has a verdant feel to it, with beautiful plants all over – hanging from the ceilings to the walls.

Their vertical garden, which is an instant eye-catcher, is a fully automated hydroponic system which requires very little maintenance. “Vertical gardens do not let small spaces limit you from having the garden you’ve always wanted. These can be freestanding or attached to a wall and can be both indoors or outdoors. As we run out of greenery in cities, vertical gardens can turn urban areas into something natural and beautiful. They improve air quality and also provide health benefits,” says the avid gardener.

Their framed garden will turn your walls into a pretty painting, adorned with plants, moss, ferns, succulents, etc. The Paludariums and Vivariums incorporate both terrestrial and aquatic elements and can be closed or open enclosures housing aquatic and non-aquatic animals like dart frogs, salamanders, etc.

The nature aquariums in the studio seem like an underwater cosmos thriving with flora and fauna. Each of the tanks has a distinct identity and is an inspired-reflection of natural landscapes such as the rocky beaches of Kerala’s Varkala.

Vincent counts himself among the lucky chosen few who get to live their dreams everyday. “Doing what you love is invigorating. It doesn’t feel like work but a blissful experience. That’s why life is fulfilling.”

However, every dream has challenges too. “Coming up with the idea of opening Forest Vibe was the easiest part. The toughest part was finding the right location and funding the project. We really had to dig deep into our pockets as we didn’t want to take a loan. Now that we have set up the business, the real challenge is to make it sustainable.”

Being bootstrapped, and with no dedicated funds for promotions, Forest Vibe depends largely on word of mouth publicity.And, since the concept of nature aquariums and Paludariumsare still new, a lot of their effort goes in educating and building awareness.

In addition to working on addressing these challenges, Vincent and his business partners are excited about future plans. He says, “We want to start a line of semi-knockdown garden furniture on an immediate basis. We are also actively looking at organizing workshops on creating Paludariums, Terrariums and Nature Aquariums.” Vincent says he is also keen on reaching out to schools and educational institutions to get the young hooked on to gardening.

Vincent says, “Rapid urbanisation has led to depletion of greenery, resulting in poor quality of life. Today, the air we breathe is borderline unsafe. The stress levels are rocketing. Spending a little time tending to a mini garden, a pot on your desk, or just watching tiny fishes zipping across a tank, is a wonder pill that has no side effects.”