With analytics, SportsKPI is helping coaches to make sportsmen successful 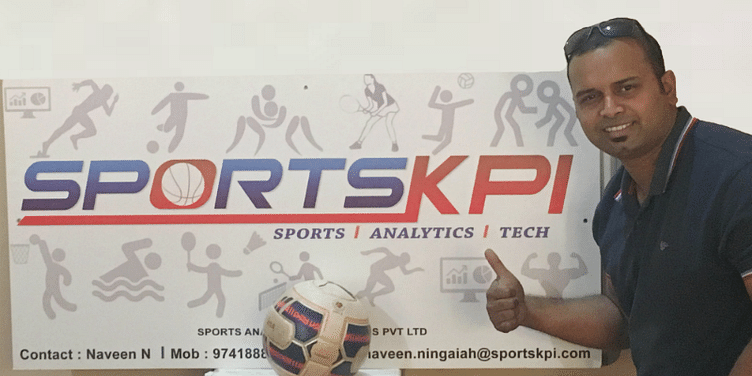 As sports other than cricket gain popularity in India, the attention is now on football, and sports startup SportsKPI is using Machine Learning to help improve the performance of athletes.

A kick, a pass, a run to the goalpost, a save, a repass, and a goal – a packed stadium, 22 players, two teams, and a whole lot of energy.

Football may not be as popular in India as in Europe, but the sport is fast gaining popularity here. And along with the game, comes the technology that can help improve players’ performance and better investments for teams.

Bengaluru-based SportsKPI is a sports analytics company that is using various tools to analyse performance indicators. Founder Naveen Ningaiah, while watching a game of football three years ago, became interested in sports analytics and saw he could build a platform for Indian sportsmen to use data on a real-time basis to improve their performance.

“Being an engineer, I realised that these are data problems, and need to be organised. I created a platform that cannot just measure data, but also be prescriptive on strategy,” says Naveen.

The Worldwide Sports Analytics market is expected to grow at a compounded annual growth rate of 40.1 percent during between 2016 and 2022, and may touch an aggregate of $3.97 billion by 2022, according to a report of Market and Research.

SportsKPI analyzes sports data, and works with teams as well as individual players. It has already worked with several professional Indian and Asian football teams, Kabaddi teams, and with the Sports Authority of India.

With information available at his fingertips, a coach can create the strongest team and choose the best formations. SportsKPI also helps a coach scout for good players in the transfer market. A transfer market refers to a platform where players are sold and bought by a club at the beginning of a season.

Some of the services SportsKPI offers include:

Identifying the formation that the team is best at

“If a coach wants to figure out which formation his team should play, he or she could use data on strategic combinations,” says Naveen. For example, if a team is playing two different formations, the coach can check which formation the team gets better results with.”

The team can compare its percentage of possession, successful passes, how many duels/tacklings they win, and study the finishing rate, among other things, that the data can throw up.

If a coach needs a new striker, his club’s analyst can start scouting players based on available data in the form of video content, scores, averages, and use the SportsKPI tool to crunch data and pick good players.

With such a service, SKPI is also gaining from clubs that don’t have enough money to pay professional scouts.

Teams working with SportsKPI can use a new way to collect data with its GPS-Tracker. Players wear a small GPS-Tracker during all training sessions and matches, and the tracker is integrated into a thin waistcoat, which the players wear.

With the help of this tracker, SportsKPI is able to collect data like how many kilometres did the player walk, jog, run and sprint. In addition, the tracker can record how fast they have been and where exactly sprints happened on the field. This data is represented in the form of a heat map.

Besides heat maps, the tracker is also able to collect statistics like total distance covered, heart rate, top speed, work rates, sprints, and efforts. The cost of using these trackers is Rs 9 lakh to Rs 10 lakh. SportsKPI plans to go global ad target markets in Europe with the GPS tracker.

Sportsvalley.com - The portal as a solution

SKPI is open to collaborations and individual packages, or even if a club wants to have only one particular match analysed. For this, SportsKPI has created the portal sportsvalley.com.

The process is easy: A coach uploads his videos onto the portal and SportsKPI analyses them based on requirements of the coach. The coach gets analysed videos and statistics back through the portal and can use the same to show to the team to discuss and improve performance.

SportsKPI makes money on annual contracts with teams and individual players, and also with short-term contracts that could be for five or ten games. The company’s revenue is around $1 million per annum, but Naveen did not give an exact number.

The collaboration between a club and SportsKPI also includes a wellness programme, which has weekly training sessions, rest days, massages, nutrition, and food for players. SportsKPI also offers sports analytics workshops and conferences.

SportsKPI is also in talks with the data analysing company SAP, which helped Germany with winning the FIFA World Cup in 2014. Collaborations with European clubs are the future goal.