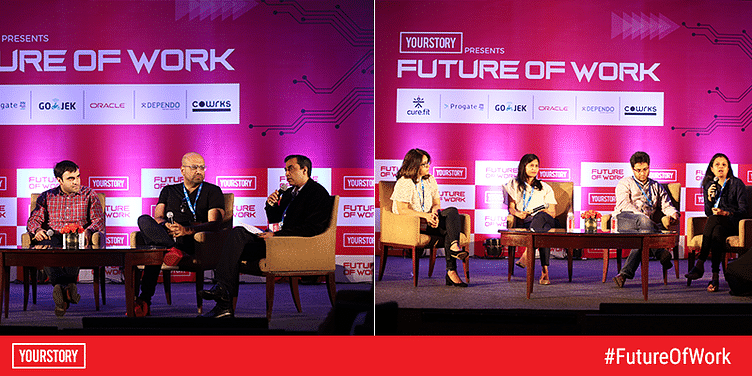 YourStory's Future of Work was a one-day conference that drew a large crowd from the startup and tech ecosystems, looking to hear more about how jobs will be defined in future.

At a time when 'Uberisation of jobs' is becoming the norm, the Future of Work conference organised by YourStory on Saturday acted as a timely and relevant brainstorming event that threw up thought-provoking questions for tech pundits to ponder upon and solve.

The event witnessed some brilliant minds exchanging ideas and knowledge on topics that ranged from technology and future jobs, to diversity and data science and brought together startups, corporates, CXOs and hiring managers.

The event hosted multiple talks and panel discussions, apart from a few workshops and an opportunity to network for founders and techies on the sidelines. These are some of the key takeaways from the event.

Brace yourself for an uncertain future

As participants were eagerly waiting to hear about ways to deal with challenges thrown up by machines and AI, Sidu Ponnappa, Head of Data Engineering and Global Talent Acquisition, Go-Jek spoke about preparing for jobs that don’t exist. He opined that while automation will reduce jobs, the best way is to face it. He said,

These days finding success is mostly with dealing with change. There is no way to predict the future and the incredible becomes banal with time. Ongoing disruptions that we have accepted are GPS, OSS, ageing, disease, injury, democracy, gender, money (cryptocurrency).

He urged the youth to find mentors to learn faster, and advised young startup founders to enjoy living in uncertainty. "Make it certain either through action or imagination. Learn to surf chaos,” he added.

How to hire and inspire the best tech talent

There were some unusual ideas thrown up: while Amod spoke about failed startups as being a great hunting ground to hire for early-stage startups, Pramod spoke about identifying innate learners in the organisation. Shivoo explained how his company started hosting relevant communities at their office to prepare existing employees for future jobs.

The need to leverage technology for internal processes

It’s easy for startups to bring solutions for their clients. But when it comes to solving their internal problems, they follow the traditional path. Parthasarathy NS, COO and Executive Vice President, Mindtree, during the keynote talk, said,

Despite there being a large set of data in-house in companies, people still follow the traditional way of finding analyses and reports. Most companies are great at using technology to reach the outside world (mainly customers), but very few look within, and leverage technology well for internal processes.

Citing some interesting examples, Parthasarathy noted how even though companies have internal data and technological resources, they generally take longer than needed to share reports, or generally don't implement solutions well.

Startup culture: who defines it?

While it is a moot point to debate on what is the right culture for a startup, Sanjay Anandaram, startup mentor and advisor to funds, during the second keynote talk, said, “While there is no right or wrong, good or bad culture founders have to be clear about what their aspirations are."

Giving examples about different cultures across companies, he spoke about Wipro’s absolute integrity. He also shared a few anecdotes, like how in the initial days at Yahoo, when the roof was leaking in the office, employees brought in buckets from their homes. He elaborated on the need to define the culture of one's company so that it sticks with all the stakeholders.

Numerous startups put up their stalls to showcase their products. Some of them included:

Curefit: When the conference was all about jobs and work, the company put up a mini job fair to select a few candidates for openings in the company. They are easily among the top fitness startups in the country today.

Dependo: The courier startup organised a lucky draw. It also gave discount coupons to participants who registered with the company.

AutoVRse: The virtual-reality startup put up an experience stall that offered visitors a sneak peek into the VR world.

Progate: When there is a large footfall of techies, how could Japan’s online coding startup stay away? Not surprisingly, many techies hung around the stall to learn more about its products.

Co-work: Co-working startup Co-work actually went ahead and gave the audience an idea of the future of work.

Nutraceutical startup Power Gummies aims to be present in over 1,000 stores across India