Outside the cricket pitch, the best partnership Yuvraj Singh has is with this 32-year-old CEO 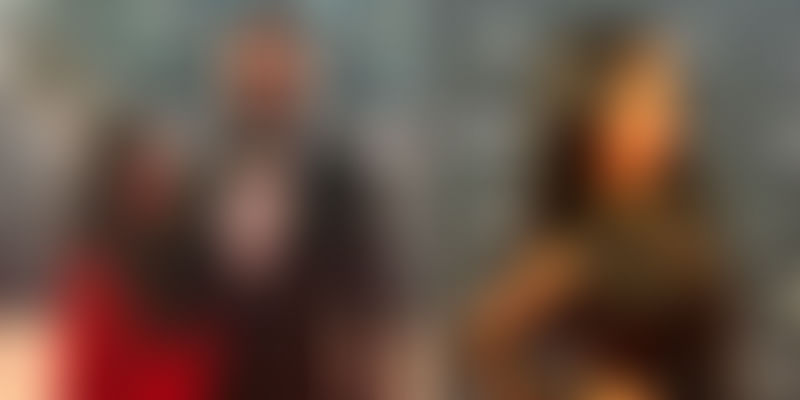 When Yuvi conquered cancer, he knew it was time for a second innings in his life as well as his career. When it came to the latter, the person he sought out was his long-time friend Shazmeen Kara.

Yuvraj Singh may make the grand game of cricket look like an individual sport as he rattles off six after six and carries the team to unlikely wins on his shoulders, but off the pitch, and in the office, he can’t – or doesn’t want to, anyway – get stuff done without his old friend-turned-business associate.

All-rounders in their own right – Shazmeen Kara and Yuvraj Singh go way back.

As the CEO of YouWeCan – much like Yuvi himself, Shazmeen is a one-woman army, heading every function right from manufacturing to logistics to marketing to raise funds for Yuvraj’s YouWeCan Foundation, his initiative to help cancer patients after he himself locked horns with the disease and emerged victorious. And, naturally, when the two team up, he spiels off ideas right off the bat, and she weeds out the dot balls, runs with the good ones and knocks the best ones out of the park. As the lifeblood of Yuvi’s philanthropy, she is helping raise more money for the YouWeCan Foundation through their athleisure label, YouWeCan.

The start of an iconic partnership

Thirty-two--year-old Shazmeen is a Mumbai-bred communications expert, who was all set to appear for the UPSC exams to eventually become an IAS officer, when a friend and mentor, who she also regards as her godfather, insisted that she was cut out for PR and marketing, and urged her to join him as the communication manager of his company instead.

That leap of faith doubled up as the turning point of her life. She took on major international luxury brands like Bottega Veneta, Tommy Hilfiger, Jimmy Choo, FCUK, Calvin Klein, TATA and Sahara, by working with Vaishnavi Corporate Communications and, later, Murjani Group.

“Yuvi is a very dear friend, and I have admired him for his work with his cancer foundation. I would always try to find innovative ways to raise funds for it – we came up with the idea of creating merchandise, starting with garments. Yuvi understands fashion and sets his own trend. He was convinced with all my suggestions and ideas and invited me to execute the same, and that’s how YWC and I came together. It’s not easy to launch a new fashion brand in a saturated market space, but right from the start we received overwhelming response from the market, and we gained more courage,” she recounts.

After extensive R&D for almost a year-and-a-half to identify the category, the product type, gap in the market and the needs of consumers, they identified Suditi Industries as their exclusive designing and manufacturing partner. YWC thus became India’s first home-grown athleisure ‘lifestyle sport’ brand. “It exudes the personality of Yuvraj Singh. We have focused on effectively leveraging Yuvi’s goodwill, via innovative digital and social media marketing. Our launch itself was our biggest marketing success with a phenomenal turnout from the world of Bollywood, sports and media – with so many walking the ramp for us. This gave the brand a big boost at the launch,” she says.

The other aspect of their business model, right from the launch, was to make it a viable fashion retail brand – so, the first year was all about creating brand awareness at a B2B level, and finding key retail partners. “We are all about smart collaborations – we have over a 100 retail partners, pan-India, including Jabong, Myntra, Central etc. Launching caps, which are considered an incredible marketing tool world over, has had a great impact on our numbers too,” she says.

YWC is now growing into new verticals like sports equipment, fashion accessories, jewellery and perfumes in the men’s, women’s, and kids’ categories.

Yuvi and Shazmeen share an excellent rapport, and an explosive working relationship. “We have a very similar way of working – we’re extremely hands-on with a lot of attention to detail. Due to this, we also end up arguing a lot until one of us ends up giving in to the better idea. Yuvi has a natural flair for fashion and retail. During one of our sampling visits to the manufacturing facility, I remember him pointing out to one out of many samples which had a slight flaw in the stitching. Even the technical team present there was amazed at his eye to detail and his inspiring standards of quality. His creativity and ideas have commercial viability, which is the basis of YWC’s success,” she lets on.

Their biggest asset, however, remains Yuvi’s covert contributions, when he’s not even trying, all thanks to his fandom. The day Yuvi hit his career-high score of 150 runs in the India-England series, the YWC website crashed for a few hours on account of the unprecedented traffic they experienced.

Since the purpose of YWC was to raise funds for the YWC Foundation, they have stayed bootstrapped and hence, were a one-woman-army and did not make any hires for the sole reason that they wanted to maximise the amount of funds they could raise for the foundation. Thus, Shazmeen has been in charge of everything - from PR and marketing, to logistics, design and finances even. In fact, sometimes, she also stands in for Yuvraj and overlooks the operations of the foundation, and deals with their small team. “My role is to grow the brand both vertically, in terms of reach, as well as horizontally, in terms of product width and SKUs. My focus for the year is to make the brand a one-stop active lifestyle destination. Right now, we’re hoping to launch our second store in Chandigarh, during the IPL,” she tells us.

From her own experiences, however, she has concluded that gender equality in India is only notional, and eludes us when it comes to the ground reality. “People find it strange to see me handling a brand all by myself especially when it comes to retail strategy and dealing with vendors. Men tell me that they are surprised to see a ‘beauty with brains’, and I don’t appreciate that - it’s not a compliment, it’s sexist. I’m sure women in every field go through this and more – but we need to normalise the notion that, like men, women too can be focused on their careers without being shamed for it and their life choices,” she says.

Her secret sauce to success is mainly hard work with clear vision. “I am a workaholic and have lived, breathed and worked every waking moment on YWC since its launch. I feel like my weakness is expecting the same from the team at YWC Foundation, but I am now conscious of building and respecting a healthy work-life balance for my team as well as myself,” she says.

And all that hard work pays off when she knows that her efforts have turned lives around – like that of the child suffering from blood cancer, whose treatment they were able to fund. YWC Foundation supports health, education and sports, and primarily works to educate all the segments of society about the implications of the disease through sustainable campaigns. “We have contributed towards 16 cancer screening camps, sponsored the education of nine cancer survivors living below the poverty line, and are currently helping with treatment of one child. Nothing can give you a better night’s sleep than knowing you have been part of an initiative that not only saved lives, but also funded the education of underprivileged kids,” she says, signing off.