Spotify has a market cap of $26.5 B after its direct listing, but is it future-ready? 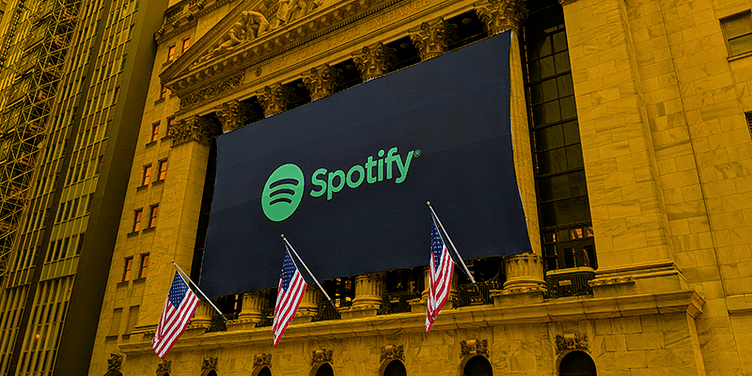 Music streaming giant Spotify has had an excellent debut on the New York Stock Exchange (NYSE). The company opened at $165.90 per share, a big jump from the reference price of $132 set by the NYSE the evening before the company’s direct listing. According to Reuters, Spotify – trading as SPOT – had a largely stable first day of trading, and at closing time, the company’s shares were trading at $149.01 per share, giving Spotify a massive market cap of $26.5 billion, bigger than Snap Inc. which made its stock market debut last year.

Spotify chose to forego the traditional IPO route, instead opting for an unconventional “direct listing” that let it offer its shares for trading without incurring underwriting costs from Wall Street. The successful IPO may have made the case for more tech companies to take the direct listing route for their own stock market debuts. However, Michael Carvin, Chief Executive of personal finance company SmartAsset, pointed out that this might be an exceptional case and warned other companies from being carried away by Spotify’s success.

In comments made to US News & World Report, Michael said, “The direct listing is a focal point for other cash-rich companies who don’t need to use the capital markets to raise money but still are seeking an alternative path to liquidity. If this works, many companies may use Spotify’s IPO as a benchmark. However, a direct listing would be extremely difficult for companies who don’t have the same name recognition as Spotify. This is a large listing, and Spotify has the advantage of a huge consumer base which it can leverage into retail investors.”

In a blog post published on the eve of the direct listing, Daniel Ek, Co-founder and CEO of Spotify, wrote, “Spotify is not raising capital, and our shareholders and employees have been free to buy and sell our stock for years. So while tomorrow puts us on a bigger stage, it doesn’t change who we are, what we are about, or how we operate.” However, the music streaming service is also facing questions over profitability and increasing competition from rivals, particularly from Apple Music, the music streaming service offered by consumer electronics giant Apple.

Spotify has yet to turn a profit in its nearly 10 years of existence, and the company even warned last week that it might see its sales growth slow in 2018, although it remained hopeful of achieving a lower annual loss. The company posted about $5 billion in revenue in 2017 and boasts over 70 million premium subscribers who pay for its service. Apple Music, the closest rival, in comparison has about 46 million subscribers. However, Apple doesn’t rely on paid subscribers to earn a profit for Apple Music, as it has a huge retail family and consumer goods offering – products it can also use to push its streaming service to consumers.

Spotify, on the other hand, has faced a heavy backlash from the music industry for revenue practices and is increasingly looking for alternatives to move its bottom line out of the red. It doesn’t take a lot to guess that Apple is rapidly closing the gap, and Spotify could start to feel the heat soon.

Daniel Ek is aware of the challenges facing Spotify. In his blog post, he wrote, “I have no doubt that there will be ups and downs as we continue to innovate and establish new capabilities...Nothing ever happens in a straight line – the past 10 years have certainly taught me that.My job is to ensure that we keep our foot on the pedal during the ups, so that we don’t become complacent, and that we continue to stay the course with a firm grip on the wheel during the downs.”