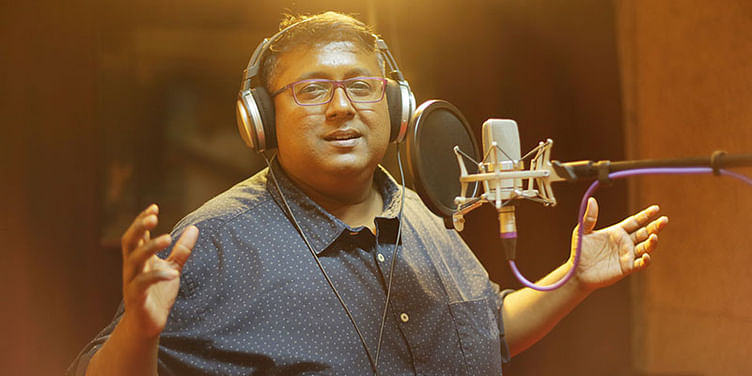 Bathroom singers can thank him for helping them find out how good they are. Read his #PassiontoPaycheck story.

Sunil Koshy found himself torn between two vocations – music and a well-paying IT job. The former gave his life meaning while the latter afforded him all the creature comforts. But it came at a price. “Every morning, I went to my guru for singing lessons and was off to work. I worked till pretty late to get back home exhausted. With a full-time job, there was little I could do to learn music, and pursue it seriously,” he says. But the swaras exerted such a gravitational pull he quit, packed his bags, and left for a gurukul in Chennai to seriously pursue music. “When I put in my papers, my senior HR at Intel had asked me, ‘Which company are you going to next?’ and I told him, ‘I am going to a gurukul to learn music’. He asked me, ‘Are you serious? Is this a conscious decision?’ I chuckled and said, ‘Yes’. The only thing that was clear on my mind was that I did not want to regret later, probably after 10 years, wishing I should have done something about my music.”

The next two years were scary. He had to deal with the double-edged sword of a career break in the resume and to live without an income. He finished his training, and for want of a better option, got back to a corporate job, juggling its pressures and his beloved music for another seven years. And then, Sunil the musician got his lucky break of sorts. He got married and immediately formed the intriguingly named From Mug to Mike, which helps bathroom singers live their dream of actually belting it out in public instead of coyly confining their muse. “My wife, Archana Hallikeri, and I started From Mug to Mike on the 50th day of our getting married.”

He gives all the due credit to Archana saying she keeps a check on his impulsive streak even as she has been his biggest support throughout the journey.

The concept of From Mug to Mike is as unique as its name; it cuts through the barrier of age, geography and background in an individual’s pursuit of music. Most people sing – often with the hairbrush standing in for the mic -- in the shower or in private when and quite a few wish they could do a little better than that. This is what Sunil tapped into. “I had always thought of conducting workshops for bathroom singers and aspiring singers, and this lingered in my mind for quite some time. I always felt there is a huge audience who could benefit from my struggling days of learning music and studio experiences with many musicians.”

He fully understands that not everyone is like him, chucking their day job. The fear of loss of income and financial instability forces people to give up on their unconventional ideas, hobbies and dreams. So through his venture he tries to provide wannabe musicians with a unique experience. “We decided to start casually with two workshops and left the future course to the response we got. The overwhelming number of 500 participants is what got us rolling,” recalls Sunil.

The workshops are organised on the basis of capability levels. The highlight is that participants are given an opportunity to record a song in their voice in a professional high-end studio with a proper acoustic setting in the presence of sound engineers. During the post-recording session, they are given a detailed analysis of their singing, strengths, and areas for improvement.

Further, with increasing levels, the focus shifts on training the participants on voice culture, enhancing voice quality, vocal range and breath control. As of now, the workshops have been organised in Bengaluru, Mumbai, Chennai, Thiruvananthapuram, Kochi, and the UAE. “We worked on a bootstrap model out of our savings and started with no external funds, and then slowly worked our way up through new concepts and collaborations with several music colleges and celebrity musicians.”

On to bigger things now

From Mug to Mike completes five successful years in April 2018 and is now on a roll. So far, 6,000 bathroom singers have been trained and over 350 successful workshops conducted. Its journey started with a rented studio owned by singer K.S. Chithra’ in Chennai, where the very first workshop was conducted. Since then, there have been collaborations with other renowned singers such as Hariharan and Kumar Sanu. Sunil also made Reboot, which he says is India’s first audio film and which narrates the story of a techie through music.

Today, he is a recognised name in the field. In August 2013, he won the first KIMA (Kannada International Music Award) for Best Male Singer in Non-Film Category for his song, ‘O Gelatiye’ from Reboot. And the circle completed itself when he recently sang a duet with K.S. Chithra herself. He choreographed the music for the Kannada film, Ombathne Adbhutha while his second film after Reboot is nearing completion. He says there are a few more interesting assignments in the pipeline.

“People keep asking me, ‘Even I want to quit my job and do something. Do you think I should do it?’ I tell them only this, ‘If you think you should do it, listen to [your heart] and just do it. You will learn and discover whatever you want along the journey.’ Do not hold yourself because of somebody else or because no one supported you,” advises Sunil.

He also has watched passions fade away into mere topics of interest. He knows that transforming true passion to profession requires single-mindedness. His own journey to become a musician set him on a path of self-discovery and taught him to stay humble. “I feel thrilled to be following my passion. Working for oneself is never stressful, even if it means many hours in a stretch. There is so much scope for creativity and exploring always.”