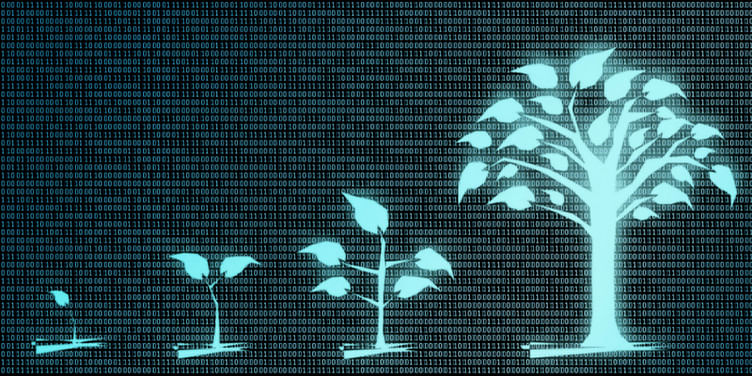 Bitcoin has already stirred up quite a controversy around the world. But just when analysts are trying to warn people about the potential hazards which such cryptos can bring along, there remains another related aspect termed as ‘blockchain’ which can actually change the business world. Victoria Lemieux, the cluster lead at the University of British Columbia, pointed out that, “People are seeing potential here. They are seeing how (blockchain) can transform business and really introduce lots of business efficiencies.” In spite of being around for more than 10 years, blockchain technology has only recently received requisite eminence as the transaction software of cryptos such as Bitcoin.

You can perceive blockchain as a record keeper which tracks transactions paired together with private and public keys and follows a particular algorithm. These transactions thereafter get distributed over a large network, with a partial copy of every transaction stored at each location. The inherent transparency of the blockchain architecture allows participants to view information in its truest sense, with changes being made only when every party agrees to the same. Lemieux adds, “The problem with paper is that it got lost, or it could be tampered with. There was a lot of fraud in supply chains, so things could get changed.” However, the multi-layered blockchain is all set to change the same.

The growing surge of blockchain applications has found its way into every sector imaginable, ranging from banking to retail, energy, governance, healthcare, agriculture, and supply chain management. The distributed ledger technology of blockchain records all the transactions entered by the members in a decentralised data log which is maintained on a computer network rather than single databases or a physical ledger. End results are cryptographically secured transactions which are approved through general consensus. Agriculture consists of 40 percent of the global workforce, thus generating a greater quantum of jobs on a worldwide basis.

Paired with growing consciousness of customers towards food safety, a vital role can be played by blockchain development for farming in solving a plethora of agro-based problems, as described below:

Food fraud has been bleeding the agro-industry a whopping $30-40 billion on an annual basis. Instances of food allergies have been rising at a rapid scale compared to the scene 25 years ago, causing consumers to demand more knowhow related to what goes inside their tummy. This modern-day trend is leaving big food conglomerates with no option other than implementing blockchain for ensuring increased traceability, accountability, and food quality. With the news feed clouded with instances of fraudulent labelling, the requirement for antibiotic-free and organic food has been soaring simultaneously.

Coupled with the dynamic blockchain mechanism, even the smallest of transactions – whether it occurs at the factory, warehouse, or farm level – can be monitored with increased efficiency and communicated across the supply chain paired with RIFD tags and sensors. With time, blockchain can provide companies fighting out in the FMCG space a competitive edge above their peers. A lot of work has already been implemented in this segment courtesy vested interests of both the consumer and producer. Companies such as Walmart have already joined hands with tech stalwarts like IBM for bringing out breakthrough discoveries in the field of blockchain development for agriculture.

Manav Gupta, the Chief Technology Officer at IBM Canada, pointed out, “Even though the different players (in the food industry) all have a view to the network, they don’t have complete information…what the blockchain system allows us to do is to procure information between these different participants securely.” IBM launched a set of trials in 2017 while collaborating with Walmart for tracking mangoes shipped from Mexico.

Blockchain technology can enable customers to gauge the exact farm from where fruits were hand-picked or the pasture which raised their grass-fed beef through a single tap on their smartphone screen. Provenance, a British company, has successfully implemented the blockchain mechanism for tracking sustainably-fished tuna from the Indonesian fishermen boats to the Japanese seafood restaurants.

Information asymmetry is serving as a bottleneck in the efficiency of food supply chains among various developing countries. Dealing with products having short shelf-life can also be extremely cumbersome, especially when the fate of tonnes of food depends upon its freshness. This, in turn, is causing a downfall in the income of farmers who are not receiving their due share in spite of being a core part of the food chain. This can get simplified with the advent of blockchain in food supply chains, as the data management system – which brings under its radar an array of brokers, farmers, processors, distributors, regulators, retailers, and consumers – becomes more transparent.

Traditional methods such as wire transfer can delay the payment process. Peer-to-peer fund transfer applications based on blockchain mechanisms can address these inefficiencies. Some are even implementing ‘smart contracts’ for triggering the payment functionality immediately on the fulfilment of certain conditions such as confirmation of goods delivery by the buyer. Improvement in data sharing can also be of help in reducing problems amounting to $1 trillion pertaining to wastage of food. Easy accessibility of information will enhance the efficiency and democratic nature of the supply chain, thus paving the way for higher remuneration being paid to the stakeholder.

Local level retailers often sell fake and substandard products to farmers for hiking up their profit share. At times, even retailers are dubious about the authenticity of the product supplied to them. Issues related to duplication and pilferage are causing big agriculture input players to lose millions of dollars which, in turn, is also causing a detrimental effect on their brand image. This problem can be solved by blockchain app development for farming which enhances the traceability of each product as it passes from the manufacturer to the end-buyer. The blockchain barcode imprinted on each product can be scanned by farmers and retailers through their smartphone for gaining a clear understanding of the authenticity of the products purchased.

Once the origin of food gets traced, examining contamination incidents would become a cakewalk. The scope of affected products can now be determined by regulators for containing financial fallout which can arise out of expensive lawsuits courtesy chronic food-borne illnesses. The Food Marketing Institute and the Grocery Manufacturers Association have reported that an average food recall costs about $10 million apart from the brand damage and loss in sales potential. The peanut salmonella outbreak in 2009 cost a whopping $1 billion, for example.

Blockchain can usher in efficiency in the field of land registration, which is a highly cumbersome process often falling prey to fraud. The Indian state of Andhra Pradesh has partnered with ChromaWay, a Swedish startup, for building a blockchain-based solution in the fields of recordkeeping and land registration. This can lead to major cost saving, given the cost- and labour-intensive process of recordkeeping. Once the pilot project achieves success in Andhra Pradesh, other states and countries are expected to follow suit for bringing about easy contracting to rent out land on-lease.

The current agriculture industry is dominated by multinational corporations who are usually the largest buyers setting the prices and advising farmers what to grow in a particular season. However, community-sponsored farming and small enterprises can again make their mark felt in an agricultural field braced with blockchain technology. Under this mechanism, the farmer delivers products to users directly throughout the season once they purchase farm share. Thus, the farmers receive the requisite funding at the very onset of the farming season which, in turn, allows them to stabilize their finances.

Blockchain agriculture can aid in solving some distribution, governance, and shareholding challenges which might crop up in due course. Smart contracts-based distribution and tokenized shareholding can help community-sponsored agriculture in scaling with greater efficiency by establishing direct connectivity between the farmers and consumers.

The farm sector relies heavily on government subsidies with wholesome amounts earmarked against the same every year. However, the amount of funds which actually reach the agro exchequer is a big question. The inherent transparency of the blockchain model can plug the pilferages in the existing setup. Effective data management systems can ensure that the allocated amount rightfully reaches the hands of the farmers in need of the same.

Blockchain might seem like a panacea of the diverse issues which have been plaguing the agricultural and food sectors for quite some time. Critics are often quoted saying, “Blockchain is a solution looking for a problem.” The touted benefits of the blockchain, however, stand a chance of being dampened with the numerous adoption hurdles which pose potent roadblocks. It is imperative to have the backing of a reliable internet connection in the very first place for benefitting from widespread adoption of the blockchain. About 10 percent of the population does not have access to high-speed internet in urban areas.

The same number jumps up dramatically when the computation is done in rural regions. Thus, the lack of infrastructure has to be addressed prior to the adoption of blockchain technology in agriculture.