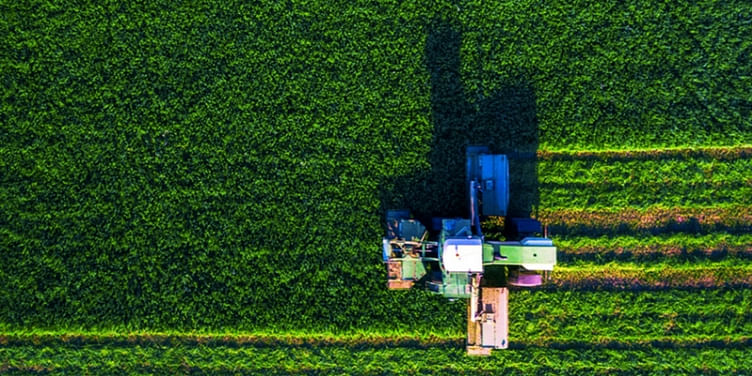 Who could have thought a couple of years ago that Indian engineering and management grads from top-tier universities, and some even with significant work experience in corporates, would be willing to venture into agriculture? The agriculture sector in India is not considered as an attractive option to most of the educated population. The ones who are not educated hope that their children escape the cycle in the agriculture sector because the pay-out for hard work is not commensurate with the risk involved. In an economy where over 50 percent of the workforce is involved with agriculture, the use and adoption of technology are startlingly meagre.

Farmers still rely on manual labour to plough, sow, tend, and harvest crops. There is over-dependence on monsoon, with 70 percent of farmland yet dependent on it. Rain-fed farmlands have a 40 percent lower yield than irrigated farmlands. Additionally, there is fragmented land holdings, decreasing groundwater levels, and poor quality of seeds. The sector lacks structure and price transparency and has a poor supply-chain process.

However, the reality of today is changing. There is a new wave of budding entrepreneurs and emerging startups in the country that are leading the way to disrupt the agriculture sector in the country. They want to deploy technology in this sector and reform it for good. The important questions are “Can technology really change the sector?” and “Why do these entrepreneurs and startups want to do this?”

To answer the first question – several countries like Israel, China, and the US have transformed agriculture practices in their country with the use of technology. These countries have demonstrated that an assortment of technology like hybrid seeds, precision farming, big data analytics, artificial intelligence, geo-tagging and satellite monitoring, mobile apps, and farm management software can be applied at every stage in the agriculture process to increase productivity and farm incomes.

The chart below, from the Kalaari IndiaTrends2018 Report, illustrates the application of technology in agriculture:

According to the United Nations, the world will need to produce 70 percent more food in 2050 to meet the growing demand, and technology can help in increasing agricultural output. Several global organisations are developing new solutions for agriculture. The global precision farming market is estimated to cross US$5 billion by 2023 and grow over 10 percent per annum during the period 2016–2023. The global agriculture robot market is estimated to grow at a CAGR of 21 percent and touch US$11 billion by 2023. In tandem with these global trends, several startups have recently emerged in the agri-tech space in India.

But to answer the question “Why enter the Indian agriculture space now?” – because the sector holds tremendous potential for technology adoption, considering the sheer size of the population involved.

According to McKinsey Global Institute, the application of various digital and agronomic technologies can have an economic impact of US$45–80 billion annually by 2025. Not just that, 90 million farmers could potentially raise their incomes, 200–250 million Indians could benefit from better nutrition from abundant harvests, and as many as one million Indians could find decent job opportunities as computer-equipped farm-extension workers. The graphic below explains the detail of the economic impact:

The existing agri-tech start-ups in the country are using technology in two areas:

There is also substantial opportunity to profitably organize perishable produce-value chains as India is the largest producer of fruits and vegetables globally. Around 30 percent of fruits and vegetables lost to spoilage during distribution lead to an estimated annual loss of US$4 billion. India’s cold storage market is valued at Rs 62,000 crores and is estimated to be growing at 20 percent p.a. Leveraging the cold storage market opportunity here are Tessol and WayCool.

The agri-tech sector today is where the pharmaceutical industry was in the 1960s. A lot of R&D has gone into the pharma sector as compared to agriculture, where barely any research has been accomplished to increase productivity. The inflection point is now where people are realising that agriculture is yet to be disrupted by technology. The time is also ripe for this now as several other macro factors are driving the agri-tech wave.

B2F (Business to Farmer) opportunity: The increasing penetration of budget smartphones, cheap access to high-speed internet, and the growing regional online content are helping B2F companies with direct access to farmers. Also, contrary to the belief that farmers are resistant to change or adoption of technology, it has been found that farmers are quite business savvy, and if they are introduced to a product or process that adds value to their activities, they are happy to adapt and change behaviour. In addition to the new-age B2F agri-tech startups mentioned earlier, E-Choupal, an initiative by ITC, is an example of an Indian conglomerate which is actively solving farmers’ problems.

B2B opportunity: India has 15 major climates and 46 out of 60 soil types in the world. With such large diversity, India makes for a great research base. Also, talent is affordable in India as compared to other countries. Global agri and tech giants are leveraging this opportunity to develop agriculture research which later will not just be useful in India but can potentially solve problems in other places as well.

Government: The government aims to double the average farmers’ income by 2022. With an aim to boost innovation and entrepreneurship in agriculture, the Government of India is introducing a new AGRI-UDAAN programme to mentor startups and enable them to connect with potential investors. In December 2017, the Ministry of Agriculture launched a first-of-its-kind programme – Agriculture Grand Challenge – with the aim of solving 12 key challenges affecting the farm sector by partnering with startups in the space through incubation and mentoring. The Ministry of Agriculture is also setting up a Rs 2,000 crore Agri Market Development Fund to develop retail infrastructure in agriculture marketing.

Global and Indian investors: According to Venture intelligence, in the last five years, there have been 41 deals worth US$96 million in the Indian agri-tech space. The graph below shows investor interest in this nascent and upcoming sector.

Besides improving operational efficiencies, agri-tech is likely to have a far-ranging social impact that can lead to a domino effect, potentially solving real-life challenges in its wake. For instance, the recent activities around the agri-tech sector can increase employment opportunities and income of farmers. The increased earning can, in turn, limit the rural-to-urban migration. Rural areas prosper, leading to the better purchasing power of the rural population, which, in turn, helps the overall economy.

Agri-tech is a story of resilience and innovation. It is about leveraging technology and building solutions to indigenous problems through sheer persistence. The road is less travelled, but it can unravel significant treasures while also pulling the agriculture sector out of the dark.

We, at Kalaari, hosted our first agri-tech event on August 30, 2018. Our goal was to enable cross-pollination and learning that entrepreneurs can look towards for insight and inspiration. Thought leaders from the industry, entrepreneurs disrupting the space, investors, corporates, and ecosystem enablers focusing on agri-tech came together on a single platform. The participation and enthusiasm for the event were heartening. We look forward to being a part of many agriculture opportunities in the near future.

Disclaimer: The article is the independent opinion of the author and does not represent those of Kstart or Kalaari. Kalaari is not an investor in Agricx Lab, CropIn, Intello, Ecozen, and AgroStar.