Looking to improve your game? Str8bat coaches you by sitting right on your cricket bat 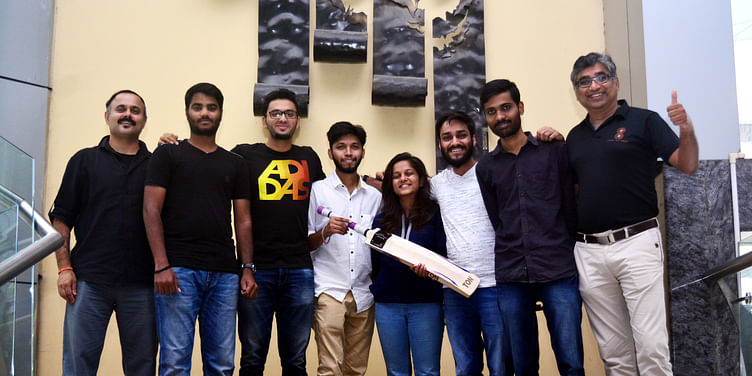 Bengaluru-based sports wearable startup Str8bat has developed a device that provides instant insights to coaches and players to help them improve the player's skills and performance levels.

For many, sports is a religion, and its greats, worship-worthy demigods. In pursuit of perfection, sportspersons are constantly trying to figure out ways to improve their skill and techniques - this means plenty of practice, and hours spent pouring over footage to see what could have been done better, or differently.

Aiding sportspersons in their pursuit of perfection, Gagan Daga, along with co-founders Rahul Nagar and Ritesh Kapahi, started sports wearable startup Str8bat. Only, their wearable is not for a person, but the cricket bat.

The device, strapped onto a cricket bat, maps real motion onto the virtual world with the use of a sensor. Str8bat has developed analytics algorithms and solutions that provide instant visual insights to coaches and players on their mobile phones.

The Str8bat sensor - which weighs 15 gm - is stuck on to a cricket bat and records data such as bat angle, accelerated downswing, bat speed, the wagon wheel, and speed impact. This enables players and coaches to monitor every session in greater detail with a new perspective. This not only saves the cost in setting up cameras, but also enables the user to access the insights whenever and wherever as the data can be saved and viewed on a cell phone.

Gagan says the product has been in constant iterations based on customer feedback, and is far from what they started out with.

Knocking it out of the park

Gagan says he has always been passionate about cricket, but could never actualise his dream of playing the sport on a professional level. "Maybe my efforts were not good enough. So I decided to focus on studies, which was an easier option," he adds.

Backed by 17 years in the technology industry and with a mid-life crisis looming, Gagan decided to take the plunge and combine sports and technology and incorporated Str8bat in March 2017.

At the INSEAD Business School's Executive Leadership Program, he met co-founder Ritesh (42), who brought 20 years of experience in hardware and technology to the table. Co-founder and COO Rahul (42) comes with 20 years of tech experience and is also Gagan's Sunday-cricket buddy and a triathlete.

A good inning for the sports tech industry

Most other tech-play in the sports industry are expensive, camera-based, and require a complicated setup process. Unlike the video-capturing method, Str8bat does not require a lab setup. It also replaces the use of multiple cameras with one sensor that captures a 360-degree motion of the bat.

Sports tech is a fast growing segment. Last month, former Indian skipper MS Dhoni picked up 25 percent stake in Run Adam, a tech platform that connects athletes with resources, including sponsors, experts, coaches, academies, and specialists, among others. There are others, like RunKeeper, SeatGeek, and Strava. Str8bat, Gagan says, is focussed on improving the game quality.

Its customer-led innovation opens an untapped market that has a high spend propensity. The company divides its customers into two segments: the HOPE segment consists of serious players who invest their time and money in coaching clinics with the 'hope' of getting better at the game, and the EXCITEMENT segment is made of players who play the game for the love of it.

Subscription charges for each player in an academy or club are Rs 500 for a month for the HOPE segment. For 20 players using the same sensor, the charge is Rs 10,000 per month. Individual players have to pay a subscription fee of Rs 2,000 a month. Price for the EXCITEMENT segment, that is, for players buying it off the shelf, is yet to be disclosed but would range between Rs 8,000 and Rs 12,000.

Str8bat, the founders say, essentially charges customers for the insights gained from the sensor which are visible via an app. A player has access to information on the areas where he hits the ball, where the ball hits the crease, speed of the bat, and 3D visualisation of the bat path, among others.

The cost of producing each of these devices is Rs 5,000 and the consumer acquisition cost (including marketing and distribution) per player at an academy is Rs 2,500, Gagan says. The trio bootstrapped the startup with $100,000, and later received an angel investment of $300,000.

Str8bat’s initial challenge was to correct any inbuilt errors in the sensor, and managing the impact that the bat undergoes while hitting the ball. The team had to also deal with the product offering being ahead of time. "We realised the importance to get early adopters as our promoters and made a first big pivot from GTM perspective - we moved from to B2C to B2B2C," says Gagan.

Str8bat launched the product in April this year. It already has more than 200 players using the device and its reports on its mobile phones. But what sets them apart from their camera-operated competitors?

Cofounder Rahul says, "All the core algorithms have been developed and innovated by us. We are not dependent on anyone else for our core which is very different from some of our competitions."

Str8bat's 2018's target includes reaching out to 80 academies, teams and associates with 6,000 players using their product.

It plans for future innovation that will help the user analyse his head balance, feet movement and also develop a solution for bowling. It also plans to move to other bat and racquet sports by 2019.