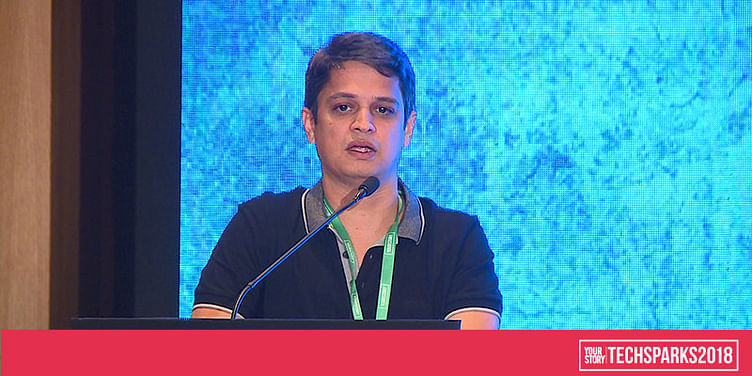 Prasad Kompalli, CEO and Co-founder, mfine said that the next generation of doctors will be powered by Artificial Intelligence and doctors will be available round the clock.

Speaking on the second day of the ninth edition of TechSparks 2018, Prasad Kompalli, CEO and Co-founder of mfine, said after developing for a long time, he is now looking at solving problems.

Prasad has developed a virtual doctor - that can stay connected with the patient round the clock, thereby understanding the problems and complications of a patient and prescribing medication and treatment at odd hours.

Prasad says that the ratio of doctors to patients is highly disproportional.

"There is only one doctor for every 5000 people in this country and 80 percent of the doctors are in the reach of only 20 percent of the cream layer of the population," he adds.

As a result of this misbalance and distribution problem, not everybody has access to even the basics of healthcare facilities and this is the problem mfine is trying to solve, with the help of mobile technology.

"In the next five years, 700 million Indians would be using smartphones," Prasad said. The sole problem in the healthcare sector is access to doctors and institutions by the weaker sections of society. According to Prasad, Artificial Intelligence is the solution to the problem of lesser number of doctors.

"We want to create a virtual doctor who can assist across various specialties. With the help of AI, we can have a doctor within reach of every Indian," said Prasad. Besides AI, video chat, hardware and location, Prasad also talked about other parts of tech.

While starting up, Prasad realised that the platform cannot be an expert without the learnings of a doctor. Only after having enough knowledge about medical sciences can the information be applied to the system.

"We got four to five doctors on board who had up to 15 years of experience and asked them all types of questions to understand the human anatomy, homology and the diagnostic process," said Prasad. They then had to figure out a way to teach medical sciences to a machine since it is the machine that had to perform the services a doctor offered.

After going through several articles and text books, the mlive team digitised all the information so that it could be processed by the machine. After developing the technology and understanding the various aspects of human anatomy, team mfine now functions as a virtual hospital, where patients can seek the consultation of specialised doctors. The prescriptions are given on the phone and the data (medical records) is all saved in the phone as well.

The basics of medicine, knowledge that doctors acquire in two to three years of time - about basic symptoms and the anatomy of the human body, has been incorporated in the platform, thus, allowing it to know about the basic diseases and prescribe medication.

As and when a patient reports a new symptom, it is stored on the platform. This keeps adding to the data available in the platform and cam be used for further consultation. "Without data there is no AI and no AI company can function without data,"  he said.

mfine plans to start a computer edition of their platform where patients can upload there medical reports. "If somebody uploads their thyroid report, the platform can understand the medical terms - TSH ,T3 and T4, and prescribe treatment or further tests," informed Prasad.

"We are trying to overcome the barrier of time and distance with the use of more and more mobile. On providing reports and pictures, we want the platform to process the report and confirm the prescription - that is the product we are developing," he added.

According to the founder, mfine's data library includes information from up to one lakh web specific sources. Prasad then goes ahead to explain the audience how exactly the platform works. He says that when a patient enters a symptom, the platform reduces the search. On adding more symptoms, the search keeps getting more and more focused until the platform finally recognises the health issue and suggest a test or treatment.

At the backend, mfine works with top-class doctors and specialists of Apollo Hospitals and Cloudnine Hospitals, among many others. Whenever a doctor provides consultation, the feedback goes to the machine and that's how the machine's data keeps updating.

Still in its early stage, mfine is "taking science, applying technology and AI and providing consultancy ands solution to the masses to solve the access problem," Prasad said, before signing off.