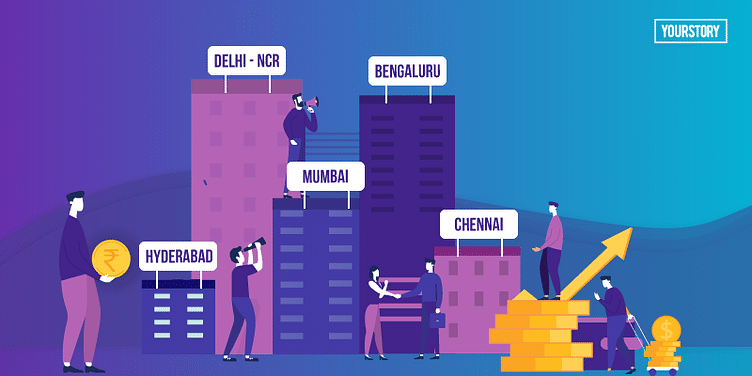 In Part 2 of the YourStory Q3 2018 Funding Report, we showcase startup funding by stage, gender, and city.

Technically speaking, Delhi-NCR beat Bengaluru in the September quarter purely on the amount raised: $1.79 billion across 68 deals, while Bengaluru raised $1.30 billion across 73 deals. OYO’s $1 billion and Paytm’s $300 million heavily tipped the scales in favour of Delhi-NCR, where the remaining startups raised just $496 million across 44 deals with disclosed funding amounts.

Mumbai stayed put in third place, having closed $403 million across 28 disclosed deals; another 9 were undisclosed. This makes Mumbai’s average deal size larger for disclosed deals compared with Delhi-NCR if OYO and Paytm are taken out of the reckoning.

Over in Hyderabad, education management company Nspira raised $75 million in private equity while AI startup ThinCI raised $65 million in a Series C. The total stood at $146.7 million across seven deals. Pune-based startups raised $51.8 million across 15 deals. These included a $15 million round for foodtech player Faasos, and another $15 million for AI player AntWorks.

Outside the startup hubs, notable mentions include $17 million raised by Jaipur-based SaaS startup LoginRadius in a Series A round and healthcare company LifCare’s $15 million Series B round. Guwahati-based Kishlay Snacks raised $15 million in a round led by Norwest Venture Partners.

The sectors that stood out

No surprises here. Number wise, accommodation accounted for $1.02 billion, but only thanks to OYO’s $1 billion fundraise. The steady performer here was fintech, with $588 million pumped in across 27 deals as against 24 deals amounting to $412 million last year. Transportation closed $356 million with a good spread across eight deals, including players like Ola, ZipGo, Revv and Shuttl. Robotics made it to the top 5 on the back of a single deal: the $225 million raised by robotics startup UiPath in a Series C round.

“The financial technologies ecosystem in the country grew too fast, thanks to demonetisation. In the coming quarters there will be a lot more action in the space as it is yet to completely stabilise. It remains a hot sector, with a lot of opportunity in the B2B and B2B segments.”

[See Part 1 of our Q3 2018 funding update for more on Chinese investors and their love for Indian language content players.]

As YourStory Founder Shradha Sharma wrote in a recent article, "While many investors believe that revenue and business models are still a challenge with content startups, in India however, there is a ray of hope in the form of content for the next 500 million users coming online, aka, Bharat.

"The heterogeneity of this audience is as vivid as the 700+ dialects that exist in India itself. What we seem to forget is that they are not a homogeneous group, not by a long shot. We expect to see more funding go into startup focusing on digitally enabling this segment of the population even if returns are yet to show up."

A better risk appetite early on

Close to $44 million was invested in 83 pre-Series A deals in the September quarter, as against $37 million across 92 deals in Q3 2017. The largest pre-series A deal was $5 million, which AI Innovation Hub for sales and support Racetrack.AI raised from a clutch of Indian and global investors, followed by fintech player Goals101 that raised $3.5 million from Nexus Partners.

Many see this slight increase in deal values is seen as a sign that there may be an increase in risk appetite.

“Investors are willing to put in a little more money in the earlier rounds like seed, Pre-Series A and Series A rounds. The quantum is relatively higher for these, what matters is the sectors that the startups are in. The later stage bets are something the investors are closely looking at. ”

He believes more funding will be available for hotter and larger startups. “Series A and seed funding will focus on segments that are believed to be hot, or founders that are interesting and have a great pedigree. A great example of this are Udaan and Sharechat.”

There were also a higher number of Series A deals this quarter as compared with last year. Over $167 million was pumped across 38 deals in the September quarter, while Q3 2017 finished with $55 million across 12 deals.

The largest Series A deal this quarter was the $17 million that SaaS startup LoginRadius raised $17 million from ForgePoint, Microsoft’s venture fund, followed by robotic process automation provider Antworks, which raised $15 million from Japan’s SBI Investments. Lender ZestMoney rounded off the top three with $13.4 million from Xiaomi.

Series B deals, though, saw a drop this quarter compared to Q3 2017. Over $155 million was raised over 15 deals, as against $385 million across 17 deals last year. Significant fundraises included ZipGo with $43.7 million, PaySense with $18 million, and Servify with $15 million. Series C deals took centerstage in Q3, amounting to $1.2 billion across 19 deals dominated by Udaan and UiPath ($225 million each), followed by robotics player Grey Orange ($140 million), wellness startup CureFit ($120 million) and ShareChat ($100 million).

While UiPath is a Danish company, we have included it in our funding round up as according to their announcement, their fundraise was primarily for growth in the Indian market.

“The proven models will continue to attract investment. Also, founders with a great pedigree will attract investment. Sectors like content and fintech that currently are in a bullish cycle, will get funded in the later rounds. The later stages and rounds ” says Parag.

There were three Series D deals - Dream11 and BookMyShow raised $100 million each, and the energy big data analytics startup Autogrid raised $32 million. In the prior-year quarter, there was only one Series D deal worth $16 million was raised by the fintech company Ezetap.

“Overall, it is a bullish year, and the amount being pumped into the startup ecosystem is going grow,” says Parag

Of the 226 deals this quarter, just seven startups with women founders at the helm raised funding and accounted for $5.3 million of the total kitty; another 3 deals did not disclose funding amounts, including the Series B round raised by Sheroes. That amounts to less than a drop in the ocean.

Another 37 startups co-founded by women (with male co-founders) raised $196.2 million across 21 deals with disclosed funding amounts.

The ‘grand’ total? $201.53 million across 37 deals – 5 percent of total funding raised this quarter. This is a decline compared to the 8 percent of the total in Q3 2017 ($354 million raised by companies where women were founders/co-founders).

While we are seeing an increasing number of women starting up, it is a slow journey, and far from equal. The challenges at home are still holding them back.

According to the Mastercard Index of Women Entrepreneurs 2018, women in markets such as India show less inclination towards business ownership (less than 15 percent) since India and other countries like Ethiopia, Tunisia, Malawi, and Egypt are less wealthy and the underlying conditions for women business ownership/entrepreneurship are less favourable, and the cultural bias against women business owners, leaders or professionals are more pronounced. Women in these economies are also less driven or able to grow their business and are more likely than other regions to discontinue their businesses for reasons such as unprofitability or lack of finance.

"I think VCs are looking for great businesses to back. I don’t think they have a specific mandate to look for businesses that are male or female led. Having said that, many investors are looking to add diversity to their founder pool and because of the obvious gender imbalance (which is there all over the world, not just India), female founders tend to stand out.”

One can but hope that the numbers will look better when we write the full year 2018 funding report.