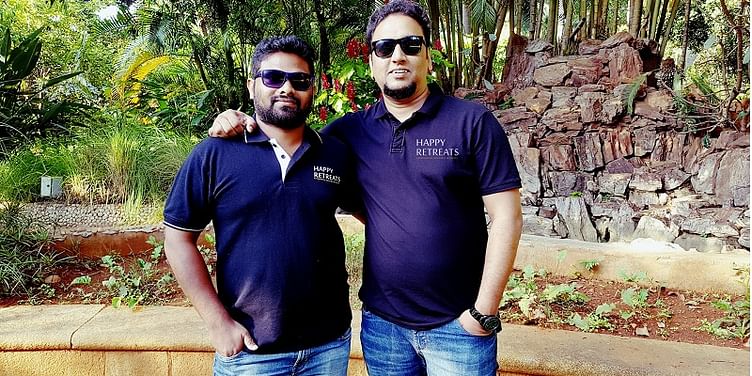 Pradeep Gowriraju was not your typical software engineer: he wrote code by day and planned parties by night.

Such was his love for party planning and organisation that he soon became the go-to consultant for parties, events and functions for friends and families. Between 2011 and 2014, this techie meticulously planned parties, sometimes even donning costumes to entertain kids at birthday parties. Along the way, his childhood friend, Pradeep Goud Nagula, teamed up with him and the two churned out hit after hit.

At one such event, Gowriraju and Nagula heard about the concept of parties held at getaway retreats on the outskirts of Bengaluru. They then met a family who had a lovely three-room farmhouse sitting on a two-acre property just outside the city, but did not know how best to utilise it. Happy Retreats was born soon after.

The birth of Happy Retreats

In late 2016, Gowriraju took the property from the couple who owned it and started a website, listing just one property. He employed a couple of people to manage and maintain the property and within a week, got a call from a family that wanted to spend a weekend there. Charging Rs 1 lakh to organise games, food and stay for 12 members, he was able to make a good profit after paying off the landlords. The money was used to build a better website, and this became a steady stream of business for Gowriraju and Nagula, who now manage 10 such properties in and around Bengaluru. Gowiraju had previously worked at IBM, while Nagula put in time at corporates before deciding to start up with his friend.

As a creative hospitality firm, the duo helps families and couples wanting a weekend getaway at an affordable price by giving them offbeat solutions - a farmhouse retreat than the usual event organised in a hotel ballroom - that makes it more a celebration than a party.

“All our retreats are maintained and operated by Happy Retreats to ensure that we give signature attention to the customer requirements and maintain all the hospitality standards without any compromise on the quality of the service,” Gowriraju explains.

The firm takes on the task of complete maintenance and the upkeep of the property while generating a steady stream of revenue for the asset owners.

In close to 22 months of operations, the company generated Rs 2 crore for FY 2018 with a gross margin close to 50-percent. It wants to take on more properties in other major cities starting FY 2020. Gowriraju and Nagula also want to cover farmhouses outside at least eight more cities, and will constantly reinvest in their business. They have currently invested Rs 50 lakh of their own savings in Happy Retreats.

The duo says that they have not invested heavily on tech and will do so once they sign on more than 50 properties and can seek outside investment. Currently, they are focussing on being a full-service weekend getaway provider by managing properties of owners who cannot monetise their farmhouses and estates.

The business of hospitality

According to a report by KPMG, the hospitality sector in India is expected to grow at 16.1 percent CAGR to reach $234 billion in 2020. It encompasses a wide variety of activities within the services sector and is a major job provider, both directly and indirectly.

While Airbnb leaves the property management to the individuals who own the property, Happy Retreats manages the properties completely and subscribes to a model that is more like OYO Rooms, but, exclusive to weekend getaways.

“As a brand, we always focus on creating the value to the existing ecosystem of the hospitality space and the numbers and revenues are just a byproduct of all our positive efforts,” says Gowriraju.

The startup competes with aggregators like lifeoutside.com, thrillophilia.com. Then there are large companies like MakeMyTrip, Cleartrip and GoIbibo. Gowriraju and Nagula are betting on the service element to be different. “The reason why we have scaled slowly is the focus is on complete service. The reason why great properties are built is the service element and we believe this will win in the long run,” says Gowriraju.