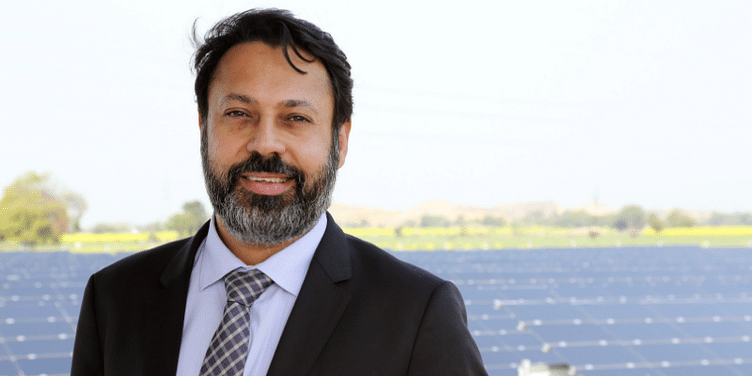 The 2006 American documentary An Inconvenient Truth put the spotlight on global warming. It had many sit up and take note - and among them was Inderpreet Wadhwa, then a 34-year-old software professional working in the Silicon Valley.

Inderpreet quit his job, and decide to look for ways to tap sustainable green energy. He founded Azure Power Global Limited in 2008. Less than a year later, New-Delhi based Azure Power installed India’s first private utility-scale solar project in Punjab. Today, with a portfolio of over 3 GW across 23 states, it has received India’s first and highest rated platinum certification from Leadership in Energy and Environmental Design (LEED) v4 Commercial Interiors.

In 2016, the company became the first Indian energy firm to file an IPO in the US and was listed on the New York Stock Exchange. In a conversation with YourStory, Amritsar-born Inderpreet spoke about the evolving solar sector and the journey to create an enterprise value of $1 billion.

Inderpreet studied electronics engineering at GNDU Punjab and pursued his post-graduation from Haas School of Business at UC Berkeley.

Influenced by the documentary on climate change, Inderpreet tested the waters in building a business in agriculture, water, or clean energy.

“After some research I concluded that wind energy in India is largely being developed in coastal areas and does not have the potential to reach every household. Then I investigated hydro and felt there were a lot of social and environmental challenges. With biomass, I felt you could not scale because it would be difficult to ensure supply of biofuel raw material. Solar made a lot of sense even though it was the most expensive source of energy,” he says.

Inderpreet felt India was lagging when it came to harnessing solar energy despite the abundance of sunlight. “The energy demand in India is very high for agriculture. People in villages water the fields at night because cheap power is available at night, but if you had cheap power during the day, farmers could actually do more work.”

Inderpreet discussed his idea with his father, who earlier worked with the National Insurance Company. His father felt they did not have the capital and expertise.

“He told me you are going to fail. I didn't have answers to all his questions, but I thought that if I was able to set this up I would invite him to work for me.” he recalls.

Inderpreet soon realised there was no policy that promoted generation and usage of solar power in India. This meant that to start a business, he had to approach every state. Punjab, his home state, seemed the obvious place to start.

When he did not find support, Inderpreet decided to tap into his connections in the US. This was also the time the Department of Energy and other governing bodies were looking at piloting a large-scale solar project in India. The first investment for the first large project was $6.2 million; it came in 2008 from the Overseas Private Investment Corporation (OPIC).

Inderpreet launched the first project in a village called Awan in Punjab. He approached local communities and pitched for panchayat land that was barren and unused.

“The next step was to convince the localities who proposed Rs 5,000 per acre as annual rent. We told them we would double that amount, and pay three years in advance. The next roadblock was getting government sanction. The number of approvals required for a small project like this was mind-boggling. It took us a year just to navigate the process,” he says.

The team started work after but ran into other problems.

“The district was heading towards panchayat elections, followed by the state and national elections. This meant a huge part of our files and approvals got stuck, including labour. It took us a couple of months to regain momentum,” Inderpreet says.

The next challenge was technical integration. Railway lines ran through some of the land allocated for the project. Days before the deadline, authorities from Indian Railways halted the project because the mandatory government approvals were not in hand. “I visited the Indian Railways in Delhi. We finally got approval to build the project on both the sides of the railway line for about 3-4 km,” he recalls.

Since then, there has been no looking back for the company. Today Azure Power is India’s leading solar service provider. With a pan-India portfolio of over 3 GW across 23 states through partnerships with state governments.

It has developed, constructed, and operated solar projects of varying sizes - from utility-scale, rooftop, and microgrids of over 1 GW. In 2009, the company was selling power at 17.91 per unit in Punjab. Today, almost a decade later, its lowest price is 2.48 per unit, which is not commisioned, but is being built, in Rajasthan.

In 2017, it forayed into the micro and mini-grid segments under Azure M-Power solutions, which focuses on providing affordable electrification solutions in rural areas. To increase the benefits of the microgrid market, the company is open to partnerships through long-term PPA and sustainable credit models.

Is the future really bright?

Today, Azure Power has 600 employees on its payroll. It executes projects in partnership with several state governments. Other services include integrated project development, EPC, financing, and O&M services. In 2009 when it deployed its first 2-megawatt capacity, it became the first Private Utility-Scale project which was executed by any private player in the country. This meant it could generate large-scale electricity in a photovoltaic power station at a scale large enough to be classified as 'utility-scale' or concentrated solar power.

After building a successful business in the country for the last decade, Inderpreet says the government has limitations. These include limited funds, and a limited ability to focus since there are so many other pressing socio-economic problems. In 2016, when Azure Power filed for an IPO in the US, Inderpreet says that the Indian investors did not understand the energy sector, as much as the ones in the US did, which also helped them raise more foreign funds.

But, he believes a business like this has more pros than cons.

“In this sector, 100 percent FDI is permitted; there are transparent reverse auctions. It makes a net positive contribution to society because we are selling power at a cheap rate and are creating cash flow for local communities through land leases. We are increasing the government’s revenue, reducing current account deficit, and creating employment,” Inderpreet says.