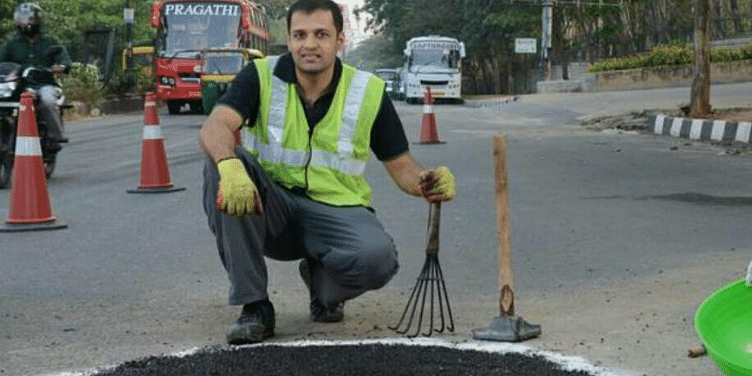 This social venture is proving to be the prayer for Indian roads with its easy fix solution. In an exclusive chat with YourStory CEO and Founder Shradha Sharma, PotholeRaja’s Founder Prathaap B shows how they are doing this.

With its ready-to-fix cold asphalt mix, PotholeRaja is enabling citizens and organistions to take ‘law into their own hands’ as it were, and repair potholes on the roads.

Concerned about the constant criticism that Bengaluru’s traffic and roads are subjected to, Prathaap B founded PotholeRaja. So far the social venture has fixed 4,500 potholes in and around Bengaluru and has been approached by various government and private organisations across the country to mend its roads as well.

Potholes don’t just make ‘good’ conversation openers. They have serious consequences. Every day, 10 people lose their lives because of potholes, and in 2017, nearly 4000 people died because of badly-maintained roads, and more than 25,000 were injured.

Prathaap says the now-familiar crib about Bengaluru’s traffic was a discomforting question and he had to find a solution. “I started researching about it and initially looked at it as a technology platform to enable citizens to report issues. I created a mobile app and got a number, 814pothole, for people to call in,” he says.

Repairing and maintaining roads come under the purview of civic bodies, but of late a number of citizen initiatives have cleared garbage and beautified public spaces. So why not repair the potholes also? “I found an eco-friendly, ready-to-fix cold asphalt that is an easy way to fix the roads without the heavy duty machinery involved in road maintenance. All that people need to do is store two-three bags of the mix in their car along with a broom and they are all set,” he says. He adds that they have received queries from children as young as seven years old to senior citizens as old as 75 years old.

Considering it is a social venture, Prathaap says initially he had to spend from his pocket and then his friends starting donating for the cause. “Today, we have a wildfire of CSR engagements with big organisations like Toyota, Bosch, and other automobile companies partnering with us,” he says.

Under the employee-engagement programme, employees help in reporting and fixing the potholes, while the organisation sponsors the repairing. They also work with private industrial areas and toll roads as a for-profit initiative.

“Our mission is to give at least 500 people employment,” says Prathaap. According to him, when he encounters someone begging on the road, he hands over his business card. He hopes it will turn out to be money well earned.