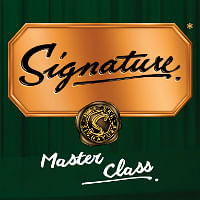 Using this dialogue from his movie Raees to explain the difference between being rich and being wealthy, Shah Rukh Khan, a prime example of a self-made star in the Hindi film industry, shared his take on the importance of money, making it big in life and following your passion.

With the disclaimer that he would be honest even if people derided him for ‘being irresponsible and sending the wrong message’, he added, “Don’t believe anyone who says that money cannot buy you happiness. Money is extremely important to fulfill your desires and your responsibility to your family. Before you become a philosopher and claim that you don’t need money, earn well. Work hard, be incorruptible, don’t cheat, and remember not to be too greedy. Earn just enough, as money is a great factor to fulfil one’s passion.”

SRK was in conversation with Cyrus Sahukar in front of a packed audience at the Signature Masterclass in Lucknow. Braving the winter chill, crowds had started gathering at the venue hours before the show. Once the evening’s proceedings began, Shah Rukh the entertainer was very much in evidence as the serious discussion was interspersed with a few of his most iconic dialogues and some witty banter, much to the delight of a crowd of approximately 2,000 people.

He credited his parents with nurturing his talent during his childhood in Delhi. In an endearing recollection, he spoke about evenings when the family would gather around the radiogram, and his parents would ask him to enact the dialogues and songs that played.

Talking about how unexpected turns in life can turn out to be fruitful, he said that he never set out to be an actor by profession. “I wanted to play hockey for India, as my father was a hockey player. But my active sporting career took a backseat as I injured my back. With my evenings free, my mother suggested that I could do theatre.” In a tongue-in-cheek addendum, he also mentioned, “There was a play being performed by students of Lady Shri Ram College. The cast had 80 female students and very few roles for boys, so I figured something would work out for me if I was cast.”

Losing his parents at a young age did have an impact on him, but he said he kept his head down and continued to keep himself busy. Since Delhi carried with it reminders of his parents, he decided to move to Mumbai to try his luck in movies, in the classic outsider trying to make it in Bollywood saga. “I gave myself one year to make it in Mumbai and see how it goes, and now it has been 27 years and I am still here,” said Shah Rukh. He managed to sign five films, that too all in one day - Dil Aashna Hai, Deewana, King Uncle, Chamtakar and Raju Ban Gaya Gentleman, and that was just the start of a career spanning almost three decades and varied roles.

According to him, the biggest reason for his success is being in the right place at the right time with the right people. “Talent can take you so far, circumstances do play a role after that.”

Talking about how he brings a personal touch to the roles that he does, Shah Rukh referred to his character Sunil from Kabhi Haan Kabhi Naa, who was everything that a conventional hero wasn’t meant to be. “The 90s was an era of liberalisation, and Indians were shifting away from conventional beliefs about life as set down by society and starting to believe that it was OK to enjoy life in spite of not being successful. I really feel the 90s were amazing as they taught us that it was not special to be special, but special to be ordinary. Cinema reflects society, so there were movies also where it was all right for the hero to go wrong. So, I played a loser who was conventionally unsuccessful but who people could identify with.”

Using his character from Darr as a reference, Cyrus asked Shah Rukh whether he felt any pressure to conform to the notion of the Hindi film hero being heroic, sacrificing and good. He responded, “I had no misconception that I could be a hero. Maybe that’s why I did anti-hero roles which others refused. I did not have any qualms about the character being good or bad, I just wanted to act. I still do, whenever I get an opportunity. It’s my core, and what I love doing most, and what I want to die doing.”

On how he brought so much vulnerability to the Darr role, so much so that audiences were rooting for him instead of the conventional ‘hero’ played by Sunny Deol, Shah Rukh explained how he interpreted the anti-hero. “I believe that none of us is perfect. No one is either completely bad or completely good. We all are somewhere in between. I see the story from a different point of view. Take Gabbar Singh from Sholay for instance. Probably an orphan, he took to the streets, someone hit him and he became bad. I don’t condone it, but I understand why he became bad, and I want to show you his point of view. I think we can empathise with the humanisation of the villain.”

The other avatar that he is known for playing with remarkable success is that of a romantic hero. And surprisingly he continues to claim that he is terrible at romance and doesn’t understand love stories. “I’m really awkward and the credit goes to all my female co-stars who made me so comfortable, that I am known as the epitome of love.”

According to Shah Rukh, everyone needs to have some passion, otherwise life can become very tedious. He added that if your passion can become your work, that’s good. According to him, age doesn’t play a role in pursuing one’s passion. To illustrate this, he cited the example of Boman Irani who started working as an actor in movies in his 40s. “You have one life, so take one shot and do the things you want to do. And even if you fail at least you know you tried.”

His advice to parents was to give their kids a good education. He advised youngsters that education will allow them to learn new things, meet different people, and give them more options to do what they truly want to do.

On his manic energy and how he manages to keep going every single day, he says, “You have keep yourself involved with things. People think I’m a workaholic. I’m not, I just like to keep myself busy and involved. I have realized how little I know about life and that there’s so much more to discover. The minute you decide ‘oh I know how to do this’, you should stop doing it. Instead, you should be asking, how can I do it better? Can I change someone’s life with my product? If your work can’t touch someone’s life, then your product is a waste, be it art or anything else.”

He also believes that nobody should take shortcuts and that working hard and giving it your best shot, is the only way to sleep well at night.

Even superstars can have bad days, so what does he do on a bad day? “Honestly, there is no bad day. On a good day, I don’t feel extra happy, I thank god and continue. On bad days, for instance if my team loses or a film that I really wanted to work doesn’t do well at the box office, I take a moment, I cry and then I’m back. Anyway, with my beautiful kids, you can never have a bad day. There is enough goodness in our lives and we just need to find it. Good days or bad days, happiness and sadness, victory and loss, all are transient and will pass. Don’t get attached to either, so don’t start believing you will always be no. 1 or that you are destined to be a nobody.”

When asked where did he see Indian cinema in five years from an entrepreneur’s perspective, he said, “The main thing that will help the Indian film industry is adopting new technologies and adapting, changing and pushing the boundaries. India is the oldest film-making country, why should we not have the best films then?”

The evening ended with a crackling performance by Mumbai-based band Anand Bhaskar Collective, who belted out some original numbers as well as covers of some popular Bollywood tunes.

The Signature Startup Masterclass, now in its third season, is a unique storytelling platform that celebrates real-life success stories of India’s biggest celebrities and how they successfully managed to turn their passion into their paycheck.