How Bengaluru soaked in music and recycled art at Echoes of Earth, India's first and only 'green music' fest 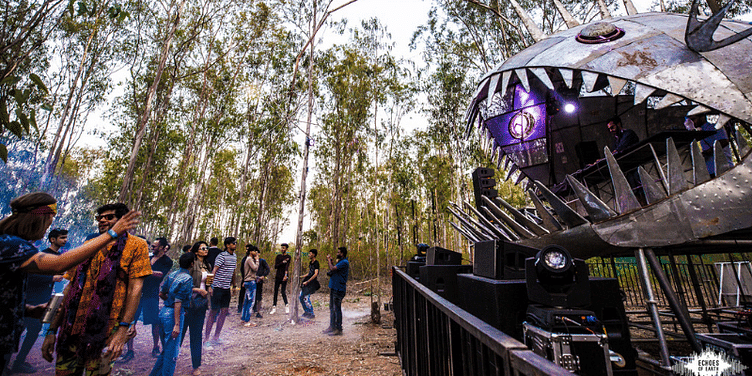 Over 40 international and Indian music acts drummed up the importance of ecological conservation, while artists displayed works of art that promoted recycling and upcycling.

They say music transcends boundaries, and that’s exactly what happened at the third edition of Echoes of Earth, India’s first and only ‘green’ music festival. With Wonders Of The Deep as the theme this year, upcycled and recycled art installations at the music fest captured the essence of marine life. Held at the Embassy International Riding School in Bengaluru, which is nestled in 150 acres of green cover, the event hosted over 1,500 music enthusiasts over two days.

The pioneering spirit of the festival rests on the elements of 'reduce, reuse, recycle', using old, discarded, recycled, and upcycled media in unique and creative ways. The venue saw eco-friendly signage, and upcycled infrastructure like chairs, dustbins and stalls, solar-powered stage and mobile charging units, and biodegradable cutlery at the food stalls.

In a conversation with YourStory, Roshan Netalkar, Founder and Curator of Echoes of Earth, highlighted the importance of connecting millennials through the language of music and art. He said, “We wanted the festival to stand for something more than just music. In Bengaluru, we have seen our lakes and our waste management system deteriorating, and it’s the need of the hour that we start talking about it. We thought it is important that the youth of the country get something that is bigger and better.”

On the theme, he added,

“While our focus areas still revolve around water, energy and waste management, we believe, just as life began in the oceans, now, more than ever, the protection of the marine environment is imperative to sustain life on earth.”

While most artists in tune with nature find inspiration in the five elements of earth, water, fire, air and aether, a chance encounter with an international artiste revealed ‘waste’ to be the sixth element of nature. “This inspired me to propose the thought of using waste to represent the depleting state of the ecology,” Roshan said.

Bhubaneswar-based mural artist Dibyush Jena and artist Sibani Biswal were the brainchild behind two of the 10 art installations made of reused metal and organic scrap. While Dibyush’s art depicted a whale and spoke of the ecological imbalance that human actions are causing in the oceans, Sibani’s art, called ‘Gates Of Linphea’, used Pattachitra, a traditional art form from Odisha, to depict a message to humans to take care of the planet.

Brian Shimkovitz, a first-time performer in India and the lead DJ from the African band ‘Awesome Tapes of Africa’ pointed out the importance of organising such fests. “Artistes and environment can prologue the thought of environmental consciousness, especially when performing in festivals like this outside the city. We are reminded of how the land actually used to be. We have to balance all the tech, the business, and the growth, keeping in mind the environment. Otherwise, we will not have anything left behind for the generations to come,” he said.

One of the stages showcases a shark made of metal scraps.