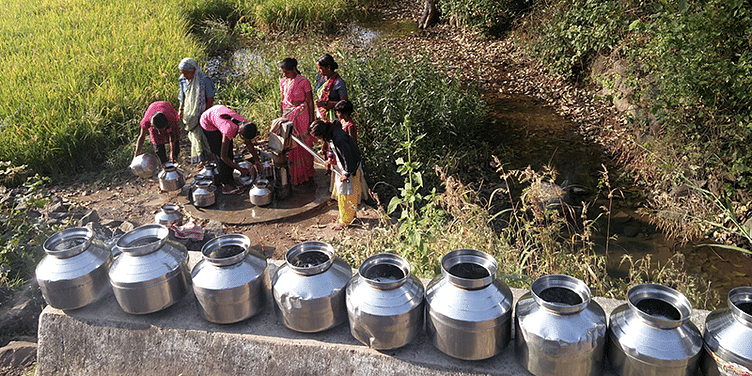 The Taraltec Disinfection Reactor is a palm-sized device that can be installed in a borewell hand pump. It then kills the microbes in the water and helps eliminate waterborne diseases.

We all know that water is life. But, do you know that water is also taking lives? Yes, the same water is causing the death of nearly 1.5 million children every year because they are consuming contaminated water. Closer home, a study by NITI Aayog in June 2018 found that nearly 600 million Indians are under extreme water stress and about 200,000 people die every year due to lack of access to clean potable water. Data by the Ministry of Drinking Water and Sanitation reveals that under-served rural areas, which is about 6,50,000 villages, depend on groundwater for 85 percent of their needs. And this groundwater is usually contaminated with pollutants and microbes that can cause waterborne diseases.

To overcome this crisis, 59-year old Anjan Mukherjee, a former marine chief engineer, created a device to turn contaminated water into safe water. Anjan, who likes to play with machines and considers science as his passion, says he stumbled upon the technology which he thought could solve the world’s drinking water problem, and that translated into a company. Along with his wife Piyul Mukherjee, he started Taraltec Solutions in 2017 in Mumbai.

Anjan says, the ‘Taraltec Disinfection Reactor’ is a ‘fit and forget’ technology. The palm-sized reactor kills microbes in borewell hand pump water and motorised water lines and eliminates waterborne diseases such as diarrhoea, cholera and typhoid. Anjan clarifies that it is not a filter, but a technology, which uses a few basic principles of physics.

The co-founder claims that the reactor, priced for less than Rs 7,500, does not require any electricity, fuel, smartphone, motor, filter, maintenance, operational cost, or technician and yet make water safe.

How does Taraltec reactor work?

Explaining the basic science behind it, Anjan says the device uses the idea that microbes in the water can be killed when there is a huge pressure. “We just added more physics tricks to Taraltec device,” he said.

The technology is inspired by bio-mimicry, adds Anjan. The Taraltec device converts the kinetic energy of the fluid into millions of targeted micro-bubbles, each acting as a localised reactor. This is packed with extreme heat, pressure and turbulence that release intense energy packets during the collapse of the bubbles. The resultant shock waves physically kill microbes and deliver the water to those drawing it up, almost 99 percent safer than earlier, says Anjan.

Explaining more about the device, Piyul Mukherjee says: “First, anyone can install the reactor in 30 minutes or so, and no knowledge or technical skills are required. Second, the process is not done by the device, but the people using the hand pump, because the whole process happens when our device reacts to the strokes done by a human being while withdrawing water from the hand pump”.

The reactor has such an impact, that a district in Maharashtra, Junnar, bought 12 reactors by themselves, without any help of the government and corporate. "Junnar had one reactor initially, then the villager started feeling the difference in water coming from Taraltec-installed hand pump as compared to other hand pumps, and this led the villagers to pool money and buy Taraltec reactors for all the handpumps in the vicinity," told Anjan.

After studying engineering for two years, Anjan wanted to pursue his passion. He dropped from IIT Bombay, and went to study marine engineering. Later, he pursued an MBA at IIM Bangalore.

Anjan says, he worked as a marine engineer till early 90s. After that, he started experimenting with machines and science. While he shied away from sharing some of his projects and experiments, he says he was busy experimenting with “anything and everything,”, “mostly failing at everything,” he laughs. During these years, he also co-authored a book on ship recycling.

Piyul says that their house is almost a full-time lab where Anjan keeps on experimenting. She herself is a PhD holder from IIT Mumbai, and has studied management from Jamnalal Bajaj Institute of Management Studies. Piyul also owns a market research company called Quipper Research Private Ltd.

The bootstrapped startup claims it is slightly profitable at present. The company has generated a small profit this fiscal year and has survived through word of mouth and corporate partnerships.

As the demand for the reactor grows, several corporate houses such as Reliance, Godrej, Jubilant, Lupin, Nalanda Foundation, Water Aid, and Tata Trusts have partnered with Taraltec for their CSR (Corporate Social Responsibility) activities.

For instance, Jubilant Bhartia Foundation, the not-for-profit arm of the Jubilant Bhartia Group, carried out a pilot in the vicinity of Jubilant’s plant in Gajraula, Uttar Pradesh. Jubilant has installed Taraltec’s reactors in three hand pumps. After the installation, a comparative analysis of the lab results showed that there was a decrease of 99.36 percent in the total bacterial count of the water.

One of the residents in the area said, “The water does not smell anymore and we have stopped going to other hand pumps to collect water since this machine has been installed.”

Now, Jubilant Bhartia Foundation plans to add the Taraltec reactor in 30 handpumps in the coming year with a potential scale up to 200. Secondly, to make the project sustainable, members of the foundation are also going to reach out to the gram panchayats of the villages in Gajraula to advocate for the installation of the reactor in the village hand pumps under the panchayat’s responsibility.

In terms of funding, the company gets a part of its capital from various awards and recognition received by Anjan. The company has won Innovation Growth Program 2.0, organised by the DST, Government of India, Lockheed Martin & Tata Trusts. Moreover, Anjan is a national winner of Global Cleantech Innovation Programme (GCIP), which is a joint initiative of Global Environment Facility (GEF) and United Nations Industrial Development Organisation (UNIDO).

Besides that, the duo has structured the company in a way that operational cost is optimal. “Most of our work is either sub-contracted or done by me and my wife,” says Anjan, who was rushing to catch his flight to Odisha to visit a village to install the reactor.

Taraltec claims to have sold several hundreds of reactors across towns and villages in Bihar, Jharkhand, Rajasthan, Maharashtra, Gujarat, Uttar Pradesh, and Odisha. “However the number of reactors sold is yet to cross a thousand,” informs Anjan.