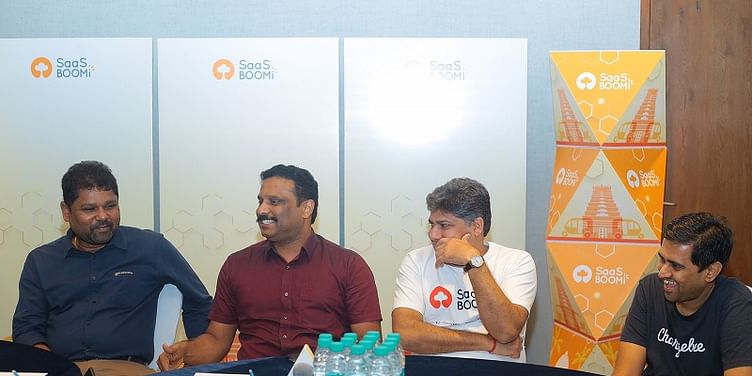 SaaSBOOMi is an initiative created by successful Chennai-based SaaS founders to help SaaS-focused entrepreneurs learn the ropes about creating technology for customers in the country, and beyond.

Software-as-a-service (SaaS) is a trillion-dollar opportunity and likely to emerge as the next big thing in Indian tech, paralleling the success of IT Services. And Chennai startups are showing the way, with several companies boasting impressive growth. Recently, successful SaaS founders in the city came together for SaaSBOOMi, a two-day conclave touted to be the first “for founders by the founders” SaaS event, to quote Freshworks’ Girish Mathrubootham, the organiser of the event. Other organisers included Suresh Sambandam, founder of KiSSFLOW, Krish Subramanian, CEO of Chargebee, and Avinash Raghava, an Accel Partners executive and volunteer for SaaSBOOMi.

With Chennai strengthening its position in the SaaS domain, with around 30 SaaS companies offering employment to 10,000 techies, these founders have crafted SaaSBOOMi to be a platform to educate and inspire the next set of SaaS founders so that they can ride the SaaS wave.

Chennai has earned the tag of the ‘SaaS Capital of India’. Even Chief Minister Edappadi Palanisamy has acknowledged the emergence of the city as the hotspot of SaaS entrepreneurship, announcing the government’s intention to facilitate SaaS companies in the state. Chennai entrepreneurs have tapped into the vast market of small- and mid-sized businesses that big corporations shy away from. There is great potential, then, if entrepreneurs build solutions for the world with a similar focus. That is precisely the reason why SaaSBOOMi was conceptualised and organised.

Calling it an ongoing effort, Girish said that the SaaS entrepreneurial community will be engaged through online initiatives and that SaaSBOOMi aims to create cohorts of SaaS companies and startups on three fronts: global, enterprise and national.

The ambition is to create 10,000 SaaS companies in India that make $1 million in Annual Recurring Revenue (ARR), of which a few hundreds graduate to the $10 million ARR league, and to see at least a host of unicorns in the next 10 years.

Suresh draws a parallel with IT Services and their early beginnings in the 1990s that gave rise to the IT boom in the country. He believes that a similar SaaS boom is now being played out. And Krish feels that Chennai’s ability to reach global customers will favour the SaaS boom. In Chennai, especially, tech-savvy entrepreneurs’ ability to sell globally using online channels have been perfected to create playbooks for others to follow. The founders of successful companies showcased their playbooks to the startup entrepreneurs and those eager to achieve success. But Girish acknowledged that readymade software product building talent is hard to find in Chennai, unlike in the Silicon Valley, and that it would take time to build a vibrant ecosystem like the Silicon Valley.

ALSO READ: Why SaaS is an industry you should look at if you are starting up today

At the press meet, Shekhar Kirani, a partner at Accel Partners and a volunteer at SaaSBOOMi, said the SaaS opportunity is predominantly in the B2B space for Indian startups. Speaking to YourStory, he said there are four essential elements of building a SaaS business, chief among them being the year-on-year ARR growth. “

This would mean customers are using the product continuously,” he added. Growth, low cost of customer acquisition and ability to address customer concerns effectively are equally important for success.

The first day of the conclave was dedicated to learning. In a joint session, Girish, and Manav Garg of Eka Software stressed the importance of arriving at the business model that can be applied again and again to generate continuous revenue.

Manav pointed out the importance of understanding the customer to design the business model, recalling his own experience with the exercise. Once the business model gets fixed, it is then “rinse and repeat” to onboard more customers and generate revenue on a continuous business.

On the measure of success for a SaaS business, Chargebee’s Krish told YourStory,

“You are measured on how well you grow despite customer churn. You have to keep adding customers even if some customers leave you, and also find ways to keep customers.”

David Thompson, Chief Marketing Officer of Freshworks, gave a Valley view to marketing for SaaS companies. He showed examples of how the company literature and paraphernalia should effectively communicate the product features, deployment and positioning. Customers sign up when you show them that your product solves their problems, and PR is one way to reach out to the customers. He went on to explain how Salesforce's new product for enterprises, named Einstein, didn’t gain popularity. So, Freshworks targeted SMB customers by launching Freddy--an AI-powered customer engagement platform, using bots, for US customers--using a dog, a faithful companion, on the logo.

SaaSBOOMi was an invite-only event, hosting over 400 SaaS-focused Indian entrepreneurs.