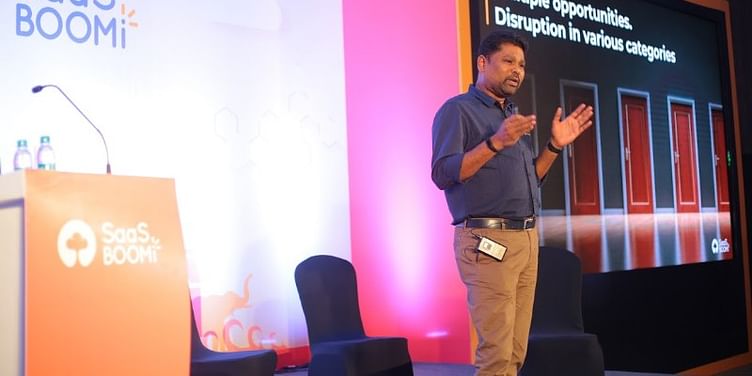 On day two of SaaSBoomi, Sridhar Vembu, CEO and Founder of Zoho Corp, and Girish Mathrubootham, Founder of Freshworks, offered inspiration and advice to entrepreneurs.

If the first day of SaaSBOOMi, a two-day conclave said to be the first “for founders, by founders” SaaS event, was all about learning, the second day provided inspiration through keynotes from Sridhar Vembu, CEO and Founder of Zoho Corp, and Girish Mathrubootham, Founder of Freshworks.

“We have to think beyond our companies. The dream that brought us together is making India the product nation,” said Girish, explaining the rationale of SaaSBOOMi at the conference in Chennai. SaaSBoomi, he said, works on the “pay-it-forward principle” so that successful founders share their wisdom with the next breed of founders to help them to achieve success.

The conclave had sessions that allowed successful Software as a Service (SaaS) entrepreneurs to share their hacks and pivots for success. Six startups showcased their products for five minutes each while three startups went through a product teardown session during which experts offered advice on how to improve their websites and make messaging more effective.

Sridhar at SaaSBOOMi on how entrepreneurs can succeed

Zoho is perhaps the first SaaS company from Chennai that showed how to build products for the world. And what made it possible was the vision of one man, Sridhar Vembu. Zoho’s founder enjoys an iconic status, be it for building and offering business software at affordable prices or his chutzpah for boldly taking on various Google applications. His legend is built on him growing Zoho without VC funding, and he has demonstrated how bootstrapping can be realised for billion-dollar success. So, the world listens when he speaks.

Sridhar connected to the conclave from his Valley home through Zoho Cliq, his company’s messaging tool.

If Sridhar’s keynote can be summed up in one line, it was this: Do boring stuff that others don’t do.

That way, you can discover something and money that others wouldn’t. Coming from someone who has built a company with an estimated $6 billion in annual revenue, it seems to make sense. When the Googles of the world were targeting enterprise customers, Zoho turned to SMBs that big corporations didn’t care about and discovered gold at the bottom of the pyramid, so to say. His advice: “Target the segment that is boring and no one cares about”. How can you do it? Read a lot of boring stuff that gives you this insight. Choose a boring place and not a glamorous city for your building your business, he said. He added that Chennai is “not cool” because it is known for only one type of weather (hot, hotter and hottest). His next words of wisdom:

“Make the product functional and don’t care much about UI”. He asked the audience if AWS’s UI was great, and reiterated that functionality scored over UI.

Interestingly, he put out a disclaimer at the beginning, stating that whatever he said should not be taken as gospel truth, and whatever seemed irrelevant to a particular SaaS business should be ignored.

After the keynote, one elderly woman asked him how he remained so grounded and did not let success go to his head. Sridhar said building products and the failures in some products had taught him to stay level-headed. Building products can also teach you a lot of philosophy and life wisdom, which made the journey worth it. “All hacks don’t succeed, and the ones that do get the spotlight and also bring in money,” he said.

Girish took the stage for the concluding keynote with his own disclaimer; he asked the audience not to expect much from his hyped speech. But in the end, Girish showed why he is so revered in India’s startup universe. Starting from scratch, he has built Freshworks into an aspirational company - to emulate for success. Girish believes that setting his bar high and keeping international standards in mind helped him soar high. He said his focus on the idea of reaching $5 million ARR from $1 million ARR in a year helped Freshworks achieve that target. Girish’s secret sauce: “Shooting for the stars and reaching there”. His whole speech was centred on only one premise: “If I can do it, you can also do it by simply inspiring the team to do it.”

Girish also spoke of organisational dynamics and people management. Sometimes, he said, hard decisions need to be made for people who don’t fit a role; he explained that the founder must use tact in dealing with such situations.

He said entrepreneurs should not deviate from the business plan because “any change in business plan is a big change that may not pay dividends”.

However, he added that one Freshworks product did achieve success despite a different business plan. Girish’s next important message was creating a culture where expectations are set on what is not acceptable. He also stressed the importance of letting other startups grow by not being aggressive about hiring and not offering astronomical salary hikes.

SaaS: the future of software

What is giving successful SaaS founders enormous hope is the kind of opportunity that SaaS presents. It is built on the India advantage in terms of software skills developed through the IT Services boom, product building abilities acquired because of knowledge of technologies, and the English-speaking proposition. The number of startups focusing on SaaS - and succeeding – is growing.

Shekhar Kirani, Partner at VC fund Accel and a volunteer at SaaSBOOMi, said, “The world is moving towards SaaS from custom software.” Software was predominantly custom-built for organisations and big corporations in the previous IT era. Software products were sold with a permanent licence for a price. The advent of SaaS has brought about a business disruption in how users buy and use software, Shekhar said. Users can now go online and pick up a software product from among several alternatives instead of asking software services companies to develop custom software for them. SaaS companies are relying on online channels to sell their software, which reduces the cost of customer acquisition. The prediction is that SaaS will take over completely, and custom software will soon be out of the picture.

The second trend is SaaS is bringing recurring revenue for companies selling the product. Previously, software was licensed to anyone buying it for a price. Today, it is sold as a service through the Cloud with customers paying on a recurring basis for using it. This is also giving rise to business opportunities like what Chargebee tapped into. Chargebee allows automation recurring billing, manage subscriptions at scale and access metrics that matter.

The success of SaaS from India has led every VC in the country to have a SaaS specialisation. No wonder SaaS startups aren’t finding it tough to get funding. “If you take VC money, you have to grow fast,” Shekhar said.

Clearly, the rate of growth of SaaS companies is only limited by the founder’s mindset. If you have a product that can be used anywhere in the world, growing that product to earn recurring revenue is the only challenge for a SaaS founder.