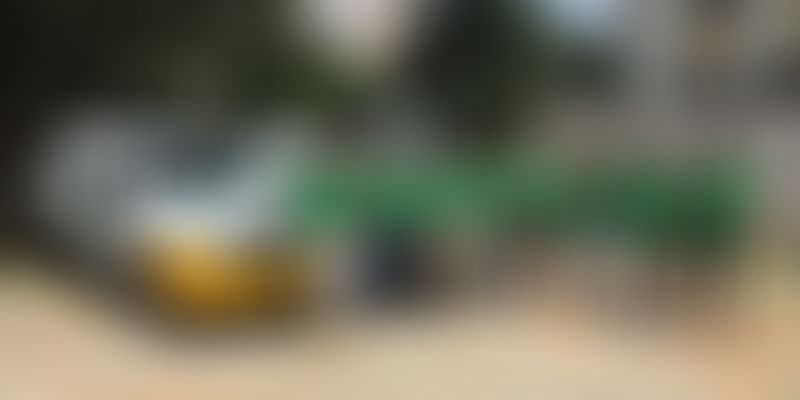 Ashish Gupta had been serving as a reservoir engineer at Shell, a global oil and gas leader, at a remote island on the West Coast of Africa when the idea of MyPetrolPump dawned on him. That island had a measly population of 5,000, with only one fuelling station in service. Every weekend, people would drive down 25 kilometres, cross a jetty, and queue up several hours to get their vehicles refuelled. Ashish, who’d spent almost a decade in various roles at Shell, would observe this and envision a day when fuelling stations could just come home and allow people “to be lazy on a weekend”.

This was early 2016, and Ashish went on to quit Shell in April. He returned to India and spent the next three months researching gas stations, fuel delivery, and the entire oil and gas ecosystem here. He discovered that India required about 85 billion litres of fuel annually, but there weren’t enough gas stations to match the demand. Real estate was expensive, and setting up more stations was not a viable option. As a result, serpentine queues at petrol pumps were an everyday sight, and fuel pilferage and adulteration were major challenges for oil companies. The entire value chain was kind of broken.

By June 2016, Ashish roped in a co-founder in techie Naveen Roy (ex-Infosys and L&T) and set up MyPetrolPump to deliver fuel at the doorstep. Both founders pooled in Rs 1 crore each to set the ball rolling. One year of R&D, testing, pilots, and some regulatory roadblocks later, it launched commercial operations in September 2017.

MyPetrolPump was a first-of-its-kind on-demand fuel delivery service in India, and attempted to solve an everyday problem faced by individual vehicle owners as well as corporates, schools, hotel chains, and so on. Since launch, the startup has delivered over 3 million litres of fuel in Bengaluru — the only city it is operational so far — and garnered more than 2,000 B2B customers. “And we achieved this without spending a single penny on marketing. Whoever heard about us came to us,” Co-founder & CEO Ashish tells YourStory.

Not only vehicle refuelling, MyPetrolPump also fills up diesel generators at large commercial and residential complexes, and at hotels and guesthouses. It counts among its customers over 300 apartment complexes, businesses such as OYO Rooms, Treebo, Lemontree, Hilton Hotels, and several large offices in Bengaluru’s business hubs of Koramangala, HSR Layout and even far-flung areas like Bellandur and BTM Layout. It is also in talks with car rental companies and fleet taxi services for potential partnerships.

The startup has processed over 30,000 orders so far, and generated revenues of Rs 15 crore in the last financial year. The average order size varies between 100-200 litres for small customers and 5,000 litres for large clients like Hilton. For orders up to 200 litres, it charges Rs 199 as a flat fee. For every litre after that, Re 1 is charged.

The delivery fee is in addition to the fuel cost borne by customers. All they have to do is open the MyPetrolPump app or website, enter location, choose the quantity of fuel required, select a delivery slot a la BigBasket, and get the fuel delivered at their doorstep.

Why doorstep delivery of fuel is pragmatic

MyPetrolPump also supplies fuel to 50-60 schools in Bengaluru. Ashish explains, “Every school owns 30-40 buses, which have to travel 1-2 km to reach the nearest fueling station. And they can do this only after dropping the kids. We help them avoid those extra trips by delivering fuel in our trucks right where the buses are parked. It not only saves time, but also fuel costs.”

The startup reckons that its mobile fuel delivery solution is beneficial on multiple accounts: One, it frees up gas stations and road traffic. Two, it reduces costs for oil companies by bringing down spillage and fuel theft. Three, it improves the quality of fuel delivered by stopping adulteration. And finally, it helps reduce carbon emissions by letting customers cut down on trips to the gas station.

“We see this as the future of fuel delivery,” Ashish says. “In most developed markets, fuel pumps are located on the outskirts of the city. India will also get there in some years. Setting up petrol pumps in urban areas won’t be possible anymore,” he adds.

But, how easy or difficult is the doorstep delivery of fuel given the obvious safety concerns associated with it? Ashish asserts that MyPetrolPump is entirely legal, compliant, and risk-free. It has received approvals from the Ministry of Petroleum and Natural Gas, even though the Petroleum and Explosives Safety Organisation (PESO) had posed initial hiccups.

“Some petrol pump owners got together and approached a local body in Karnataka and called us illegal. We had to stop operations for a few months. Even PESO thought that mobile refuelling was unsafe. Basically, the petrol pumps saw us as a potential threat,” Ashish reveals.

To overcome safety fears, MyPetrolPump spent a year on the engineering and design of its delivery trucks - possibly the most critical element of its operations. It currently owns four trucks that are combustion-proof, theft-proof, air-tight, and stable to be driven on busy city roads. Each truck can ferry about 2,400 litres of fuel at a time and service 5-10 customers.

Ashish says, “We spent a lot of time on designing the delivery trucks. It couldn’t be too big because we had to make sure it fits in parking lots of complexes. A lot of technical configuration had to be done so the fuel doesn’t move inside the truck. We also developed a fuel quality monitoring system within the truck that can check for adulteration and impurities.”

MyPetrolPump says it has received enormous support from the petroleum ministry, and is buoyed by the government’s interest in collaborating with startups in the oil and gas sector. In fact, in 2017, the central government had unveiled a Rs 320-crore fund to support startups and tech solutions in this space. Ashish is keen to avail the benefits and grants offered by the ministry.

Despite being bootstrapped, the startup claims to have been “cash positive” from Day One. “We wouldn’t need any investment if we were to go slow. But, to scale up, we need funds,” Ashish says.

Last year, MyPetrolPump won Rs 20 lakh in cash prize at Elevate 100, organised by the Government of Karnataka. Earlier this year, it was awarded $10,000 for winning the Wharton India Startup Challenge. Besides awards and grants, it has also initiated talks with VCs, and is looking to raise a pre-Series A round of $2 million in the next three months. It plans to use the capital to design 25-30 delivery trucks, and expand in other metros and Tier I cities by 2020.

Ask Ashish about the opportunity in this market, and he says there is “scope to scale up 10X”. Technology and design can improve last-mile fuel delivery in unimaginable ways. Today, MyPetrolPump delivers diesel. Soon, it will be petrol, CNG, hydrogen fuel, or any other form of gas in demand. “Our long-term dream is to deliver even aviation turbine fuel,” Ashish says. “We want to be the Swiggy of fuel delivery.”