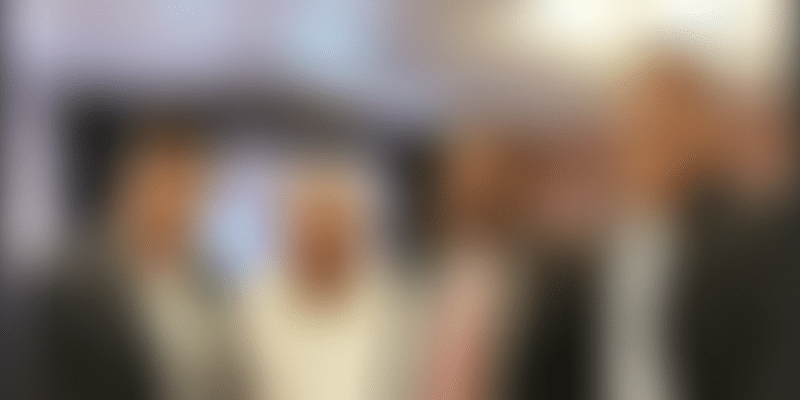 Here’s what you wanted to know about Xelpmoc Design & Tech's bullish decision to go for an IPO. The startup is looking to raise Rs 23 crore.

What do founders do once they raise funding? Besides, of course, shooting out press releases to the media.

Pop a bottle of bubbly, shubbly and make plans of moving to a bigger office or hiring a few senior talents. Yes?

But for the four co-founders of three-year-old startup Xelpmoc Design & Tech that opened its Initial Public Offering (IPO) yesterday (the first this year) on the main BSE board, the hectic day ended with a daal-khichadi dinner.

“Celebration will happen sometime in the first week of February when we ring the bell at the BSE announcing the opening of trading hours,” Sandipan Chattopadhyay, Co-founder of Xelpmoc, tells me over the phone from Mumbai.

He had a busy day yesterday and is just about catching his breath. “It feels like a moral victory,” he announces. Xelpmoc’s founders (Srinivas Koora, Jaison Jose, Vishal Chadda, and Sandipan) have been founding team members and CXOs in publicly listed companies like Justdial, Quess Corp, and HT Media. Being seasoned campaigners, they had the vision to take the company public from day one. And they stuck to the plan.

“Everyone said SEBI will never allow this. Some asked, ‘Does a three-year-old startup even need an IPO?’ ‘You don’t know the amount of paperwork involved,’ etc, etc,” Sandipan says talking about the prevailing mindset. “It is a huge leap of faith for us. We have not taken the short-term gain by going after PE or VC money, which would probably have been a bigger sum and easier process for us,” he adds. The founders, instead, took the hard route and probably an audacious one.

Nonetheless, it puts a huge responsibility on them now to succeed. “If after breaking this mindset, we break the faith then the next startup that goes for an IPO will have to face 10 times the difficulty that we did,” says Sandipan, adding, “It is this mix of audacity and humility that all of us are feeling right now.”

The startup opened its IPO on January 23 and is looking to raise Rs 23 crore. The issue closes on January 25. On the first day, the company initiated its share subscription process and got a good response from QIB as well as retail participation, and expects the same for the next two days. The shares will go live on the two main indices (NSE & BSE) on February 4.

For Sandipan, former CTO of JustDial and Co-founder of MoneyControl.com, this listing on BSE holds a special and sentimental value as well. During his early years of building MoneyControl, he would spend most of his waking hours at BSE. When they ring the bell in February, his business life would have come a full circle.

It is said that an IPO is a turning point in the life of a company, and Sandipan agrees on behalf of his founding team. Despite a collective seasoned CV among them, this is something new that none of them has ever done. Last time any of them raised funds, it was in thousands of crores. This is a very small amount in comparison, states Sandipan. But sometimes the smallest of things are more difficult. He adds,

“So whereas those fund raises were like lottery setups, this was like planting a seed of a tree which you hope will grow big and bear fruits in the future.”

Companies with successful IPOs approach it as a transformational process rather than just a financial event or as an endgame. This is what global accounting firm Ernst and Young found in its over two decades of working with top companies. It also noted that such companies outperform the competition on key performance measures before, during, and after the IPO.

The firm’s ‘2018 Global IPO Trends’ report says that stock exchanges in India (BSE and NSE, including SMEs) ranked second in the world in terms of the number of IPOs for the period between January and August, 2018. A media report in ‘Quartz’ stated: “In the first half of 2018, Indian bourses saw 90 IPOs — making for 16 percent of all listings worldwide and 27 percent more than a year ago.”

The mathematicians, including Sandipan, in the Xelpmoc team, claim that they have quite a few firsts to their credit as far as the IPO is concerned.

Due diligence and then some more

The whole IPO process took the startup around eight months and over Rs 3 crores in terms of costs towards legal fees, listing costs, and guarantee money. “It is not cheap, unlike that on the SME board. You have to go through the rigorous due diligence. You are at par with the best governance standards. Something like what Infosys follows, we had to follow,” shares Sandipan, talking about how the founders went for their audacious goal of going public so early.

The IPO-related activities were started in the middle of 2018, and he provides an easy guide for those unfamiliar with the preparation. The first step is to appoint a merchant banker; then appoint a local counsel and an international counsel (for doing the company’s due diligence); file the Draft Red Herring Prospectus (DRHP) with SEBI; once SEBI gives the initial approval, update your financials and file the final Red Herring Prospectus (RHP) with SEBI; once SEBI gives the final approval, file the RHP with the Registrar of Companies (ROC); once the ROC approves the RHP, get the price band approved by the Board of Directors of your company; finally, open the issue.

“One of the most impressive things that we noticed these past few months was the thorough professionalism displayed by SEBI. Once they realised we were not frauds, they helped us all the way. All the meetings were dot on time. It was difficult to believe that we were dealing with a semi-government organisation. It was a very positive approach and a huge, huge change,” says Sandipan.

So is the added overhead and compliance burden associated with going public worth it for startups at such as early stage? According to the founders, IPO is a fairly seamless process in India. However, it does consume a lot of time, effort, and energy. A number of regulatory approvals need to be taken. The due diligence of the company by SEBI is also time-consuming (compared to raising money from VCs).

However, the rigorous process is necessary to gain the confidence of the investors. The founders say that was a price they were willing to pay with their time and money. They maintain that doing an IPO is worth it, provided the company has a credible and experienced board and management and is focused on the long term.

Founded in 2015, Xelpmoc is a tech incubator for early-stage startups as well as a technology partner to enterprise and government clients. Started by veterans of the Indian internet, media and services industries, its vision is to help other companies develop technologies, and launch and scale products that impact the lives of the next 500 million Indians.

One of the reasons Xelpmoc did not take the VC route was because it owns equity in a diverse range of early-stage and mid-stage startups in India. Adds Sandipan,

“Thus, doing an IPO is a conduit for us to indirectly allow retail investors in India to participate in creating India’s startup ecosystem, and have access to the returns gained from the fast growth being experienced by these startups.”

The company that can get you to pronounce Xelpmoc, which is complex spelled backward, can hopefully succeed in creating a new mindset in the Indian startup ecosystem that has for long lusted after VC money.

ALSO READ: How new SEBI guidelines will make the IPO dream a reality for startups