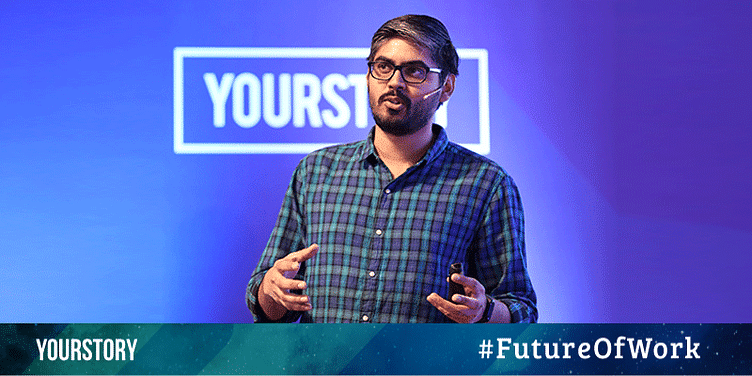 One of India’s well-known innovators and entrepreneurs, Rahul Raj, CEO of Koinex is the winner of the prestigious Hultz Prize for social entrepreneurs. At Future of Work 2019, Rahul took to the stage to share how blockchain is going to transform the world we live in, and how one can build a new trust machine.

He began by talking about trust, which he says is a firm belief and faith on the authenticity, acceptability and truth of people’s actions, reputation, words, body language and so on. Trust is an interaction to establish a connection which has transcended from personal interactions to commercial transactions. Rahul talked about the concept of ‘Dunbar Number’ which suggests that we can cognitively manage only a limited number of relationships, with a maximum limit of 150. Beyond that, it becomes difficult to track who you’re interacting with. This was the reason why the early civilisations limited the number of people to 150 in a tribe.

The whole setup was working well until people started to settle down and needed more infrastructure in place, which is how institutions came into the picture. Today, everyone is connected through the internet. We have begun to put a lot of faith on institutions, governments, banks, courts. Although everything is working well, there’s a lot of room for improvement. “One of the key drivers of human civilisation is that we are bound by intrinsic curiosity and we have the constant urge to innovate and create new things that will empower and improve our current setup,” said Rahul.

From social to institutional to programmable trust

He explained why this was the reason for the shift towards programmable trust from institutional trust, which has failed, in terms of hyperinflation, government mismanagement, highly centralised systems, data in silos, crores of non-traceable money, among others. The largest financial crash took place during the housing market collapse in the US, which affected the global economy. And this gave birth to the most-talked-about concept called Bitcoin.

According to him, trust can be engineered through Bitcoin. “We are here to engineer trust, that is why we are moving from social to institutional to programmable trust,” he said. Earlier, protocols like TCP, IP, HTTP and so on weren’t under anyone’s control, there was no central authority to drive all the development. Because of this, some really interesting applications were launched. With the Internet boom, the entire world became connected. Large conglomerates were building proprietary software and protocols which were not open to the entire mass. Because of this, they were not just able to collect data, but also play around with it, build on top of it, and put it all into a silo. This made people more dependent.

In our day-to-day lives, we depend on apps like Google Maps to navigate, WhatsApp to communicate, Amazon to shop, and so on. Our phone’s operating systems collect real-time data every second. Large companies created centralised systems, which came with their share of problems. Hard drives stacked on each other, connected with wires, they had no authenticity, could catch fire, malpractices and breach could occur, there could be intent of negligence, fraud and larger problems than we could ever anticipate. But, he says, blockchain came in as a savior at a time when we were bound by regulations and restrictions.

“Blockchain is all about decentralisation, and bitcoin is the first blockchain implementation the world has ever seen,” he said. Bitcoin is an electronic peer-to-peer cash system which is completely decentralised, distributed, immutable, tamper proof and geographically spread across the world. This is a powerful technology that’s emerging and the most important factor about it is that it’s open. It is fully decentralised across millions of devices, peoples and nodes, without having to worry about full control being in the hands of anyone at any point of time.

An open world with Bitcoin

Rahul believes that Bitcoin, even though a new and confusing concept at first, is the most beautiful technological innovation the world has ever seen. It’s all about an open and connected world that no one governs. “From placing our faith on banks where everything is centralised and every move is governed, bitcoin lets you control your financial life on your own,” said Rahul. With no permissions and an open protocol, you can transact freely without having to worry about restrictions being put into place.

Blockchain is a network of millions of devices connected through one single protocol. The code that’s written is fully accountable, audited at a really high frequency and open sourced so that people can contribute to it. In order to take over a particular network, you need majority consensus. It’s almost impossible to tamper with the data. “It’s easy to rob a bank than hack into the system,” he said. He adds, “From social interaction to institutional ones, we are moving one step forward into an interaction which cannot be governed by people and where we cannot be manipulated.”

Delving into how one can build a machine that is decentralised and trustworthy, Rahul said, “When you want to build a trust machine of your own, pick a scalable chain, identify a use case, product, business solution or a need of the hour you want to solve, and really push for some kind of open environment where people can collaborate together.”

As the world talks about making blockchain more scalable, he pointed out to an interesting aspect of blockchain, i.e. the consensus and incentive mechanism. A consensus is a large group of people who are part of the network who agree on the current state of the blockchain. The transactions in the blockchain pile up into a memory pool, where miners validate them and get incentivised. The incentive mechanism is achieved by tokenisation. These transactions have full traceability, so that the system is able to eliminate anything that could go wrong much before it actually takes place.

He believes that the underlying technology of blockchain promises far more than just financial transparency and accountability, and that it can go farther and have immense potential in the applications that we create in the future. “If the world is going to be decentralised in the future, there is going to be this tremendous transformational shift, and let’s build it together,” concluded Rahul.