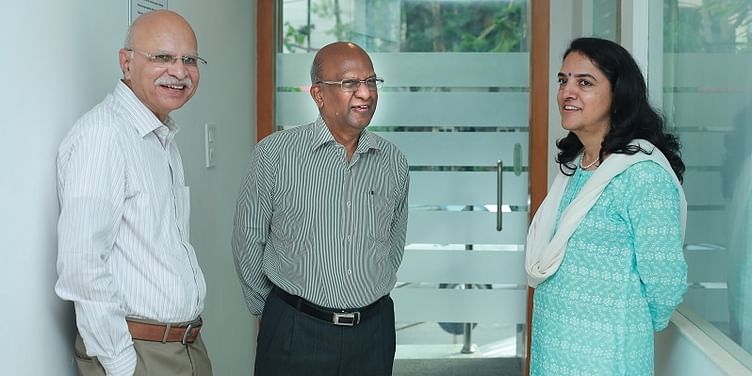 NextWealth Entrepreneurs is creating job opportunities in small cities by executing IT and BPO services at delivery centres run by local entrepreneurs. It’s a win-win-win for everyone involved.

The lack of employment opportunities in smaller towns and cities often forces graduates to either move to IT hubs, or stay home and take up jobs that don’t match their skill set.

Three former Wipro employees came face-to-face with this reality when they visited an engineering college in Salem, Tamil Nadu. They found the graduates were as good as those from any good college in a big city, and, in fact, their attitude and commitment was far better than their big-city counterparts.

The only thing they needed was to improve their English communication skills.

This got the trio thinking: what if they could take jobs to smaller towns? And that’s how NextWealth Entrepreneurs came into existence. The company is building a model that blends entrepreneurship with social impact by focusing on IT/BPO services in Tier III, IV, and V cities of India.

Every small and big enterprise is trying to leverage the power of artificial intelligence (AI) and machine learning (ML) to enable digital transformation. However, AI and ML need to work on clean and relevant data sets. Says Mythily,

“While most of this can be automated, enterprises need training in data sets and feedback on their correctness. In other words, they need the human touch.”

NextWealth provides this human touch to digital ecommerce businesses, financial services firms, and IT/Business Process Management (BPM) companies. And it does so at a lower cost by getting this work done in smaller cities.

“Our value proposition to our clients is operational excellence with a scalable and flexible approach at a lower cost than in cities.”

A client can save up to 40 percent by working with graduates from smaller towns instead of cities, Mythily adds.

The team and ‘entrepreneurship centres’

The core team comprises former Wipro employees; it includes 20 people, each with 15 to 20 years of experience. “We have known each other for over 30 years and have built large scale businesses within Wipro. We have now got together to build NextWealth,” Mythily says.

"They understand the local language and nuances, and can get things done on the ground easily," Mythily points out.

For its first centre at Salem, NextWealth got a former 'engineer, MBA and Six Sigma Black Belt' who had 15 years of work experience. He was born and raised in Salem, but was working in a big city. "He returned to Salem to become a NextWealth entrepreneur," says Mythily.

Most entrepreneurs who have joined NextWealth have similar stories to share. Besides Salem, NextWealth now has centres in Mysuru and Hubli (Karnataka), Bhilai (Chhattisgarh), and Chittoor (Andhra Pradesh), handling more than 150 processes across 10 Indian languages.

“Finding entrepreneurs to run operations at a global quality level and customer acquisition were two of the challenges we faced initially. The former we have been able to crack; today, we deliver work equal to, if not better than, any IT/ITeS company in big cities."

According to the founders, a delivery centre needs an investment of about Rs 1 crore, and two years to become functional. This includes setting up, recruiting employees, acquiring customers, and running/stabilising operations. Graduates from smaller towns work under the guidance of entrepreneurs and can earn Rs 15,000 per month. “Each entrepreneur makes up to 14 percent margin and a turnover of Rs 5 crore,” Mythily says.

The team also faced other initial challenges, including working with graduates not exposed to a professional environment and building middle-level manager rung to run operations efficiently. “We addressed this by focusing on quality from day one,” she adds.

"We have a transition tool kit that is used for every project. The plans are shared with the customer. The project is jointly monitored on a weekly basis till it goes into production.”

·     Per transaction basis- Payment depends on the type of transaction and the time required.

·     Fixed plus an outcome-based model - For projects that typically include lead generation.

“We have been profitable from the first year of operations and continue to be profitable.”

The company retains 15-20 percent of the revenue as commission and gives the rest to the entrepreneur for operations.

According to the founders, the company has been growing at a rate of 50 percent year-on-year since inception.

The outsourcing market and future

According to IBEF, Indian IT and ITeS companies have set up over 1,000 global delivery centres in over 200 cities around the world. The Indian IT and BPM industry is expected to grow to $350 billion by 2025.

Majors like Tata Consultancy Services, Tata Elxsi, Tech Machindra, and Wipro are working in this same sector. However, what sets NextWealth apart are the lower operational costs and stability. Mythily says,

“Our attrition is less than 10 percent per annum.”

NextWealth aims to grow every centre to 1,000 people each as soon as possible and add on more centres. “The next centre planned is Vellore, and we have a few more in the pipeline,” Mythily says.