Say goodbye to paper menus: this startup is changing the way we order food with its ‘fideos’ 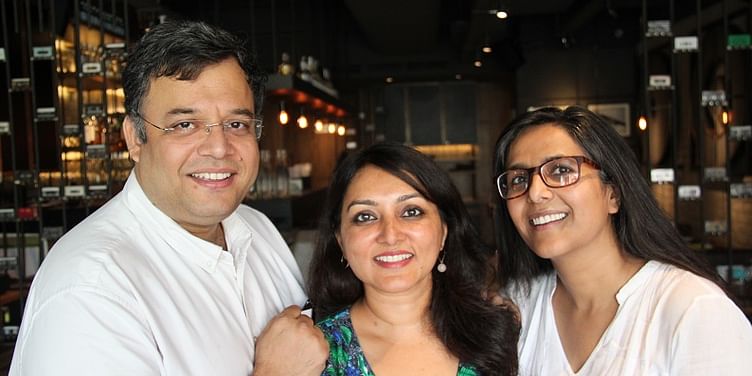 Backed by industrialist Ratan Tata and started by former journalists, Delhi-based Dash is a digital menu platform creating bite-sized videos for restaurants, allowing its customers to see what they get served before ordering.

Fine dining restaurants, besides their outlandish decor, come with elaborate menu cards, listing dishes that you may not be familiar with. And very often, customers end up ordering dishes that they never intended to order, or they may keep ordering the same dish, simply because they don’t know what a particular dish looks like.

“A steady increase in the consumer spend on food, drinks, and groceries, driven by an overall improving business and consumer sentiment is what made us confident of this idea,” says Gunjan.

Although Dash was ideated in 2015, it was only after industrialist and investor Ratan Tata came on-board as a seed investor that the team launched it at Tian in ITC Maurya Sheraton, New Delhi.

Treat for the eyes

Dash replaces the traditional paper menu at a restaurant with a tablet and allows the diner to preview the meal through bite-sized fideos (food videos) and showcases food exactly the way it is available at the restaurant.

“We sample almost everything before buying, so why not food?” says Monica. These 15 second videos give an insight into the dishes available (vegetarian/non-vegetarian dishes), the most-popular dish at the restaurant, and the meals available under a certain budget.

With the humongous discounts offered by food-discovery and online-food delivery startups, a huge gap is getting created between restaurants and diners. Addressing this pain point, “Dash is a combination of discover-eat-learn, which brings a great element of entertainment, education, and experience to the diner,” says Monica.

“Since Dash is a first in this space, it requires a push to close deals fast and efficiently. Also, most of the restaurants are owner driven, and getting hold of the decision makers is always a challenge,” says Monica.

A dash of experience

Before starting up, the founder trio were part of NDTV’s core team, and come with 20-years of experience in production and content.

Monica has previously created formats for cookery shows such as Chakh Le India, French Connection, and Highway on my Plate. Gunjan has created, produced, and directed shows including Walk the Talk with journalist Shekhar Gupta, and originals like The Big Fat Indian Wedding and Almost Famous. Noopur, on the other hand, is an award winning journalist who has worked as a producer and director for more than two decades. She is also the Founder of Smashboard, a blockchain-based tech platform against Sexual Violence.

Besides the founders, the team comprises of 16 individuals who take care of technology, content, and sales.

Also read: [Startup Bharat] These entrepreneurs bring the flavours of India to the whole country

“Since Delhi has the most exciting restaurant landscape to be covered in terms of variety, our aim is to convert food business in Delhi first and Mumbai next,” says Monica.

Talking about his experience with Dash, Monish Rohra, Chef and Owner, Veranda, a popular restaurant in Mumbai says: “We are so proud to go visual with dash.menu that we have even put a huge screen at our bar to showcase the videos, apart from the app itself. It has not only helped us to showcase the effort we made in designing our modern Indian menu but has also increased our APC tremendously.”

Dash, which is a B2B and B2C business, works like any point-of-sale system. The annual subscription depends on the number of services a restaurant selects while using the app, the average subscription fee being Rs 1,000 per day.

Speaking about how it is helping restaurateurs generate more revenue, Gunjan says:“Dash not only works as an up-selling tool for the restaurant, but also saves costs on printing the menu, updates, marketing, staff training, and faster table turns. All this results in up scaling the business by 15 to 18 percent at least.”

Monica says, “Our target market is as large as the number of restaurants listed on Zomato and Swiggy. Even if we get seven to eight percent of the number, it is very large for our revenue.”

Girjashanker Vohra, Owner, Depot48 says, “Some of our dishes used to get sidelined on the paper menu. But they started dashing off the shelves once we introduced dash.menu in our restaurant. We have got two menu updates so far, and it has been seamless.”

Restaurants across the world are now slowing switching to digital menus to cater better to their customers. New York-based Kabaq uses an Augmented Reality (AR) application that enables users to look at virtual 3D food in restaurants while ordering online.

Back home, Mumbai-based Xprpos offers digital menu and chatbot for ordering food. However, with Dash, a new market is opening up in the QSR space.

“Since there isn’t anything like this in the market yet, we have managed to trademark Dash,” says Monica.

The team is planning to scale and make Dash available pan India and internationally. The product is expected to be launched in Pune and Bengaluru by the end of this year. The team is also looking forward to getting funded for technological advancement, blockchain, and to build Artificial Intelligence (AI).

“While traversing the edible landscape, Dash aims to aid people towards making the right choices while consuming food,” says Monica.