24 hours or bust: this bootstrapped startup offers 24-hour delivery in a crowded space 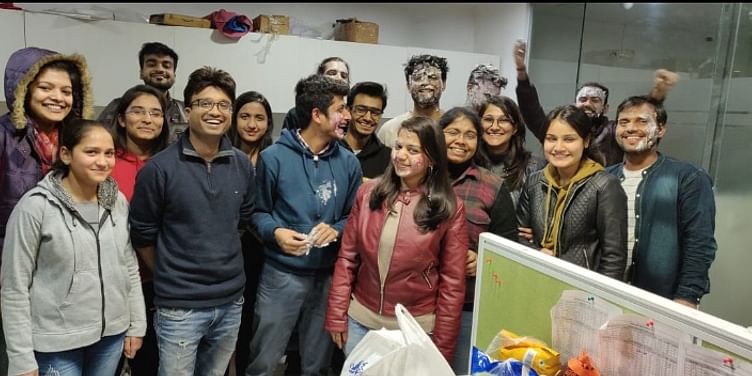 There are many players in the custom T-shirts business, online and offline, making it a fiercely competitive market in India. So what does Delhi-based Champu have that others do not?

Siddharth Jain founded the quirkily named Champu.in to give people the option of customising their T-shirts with over 200+ designs on offer. After all, it was 2015, and ecommerce was the sector to be in. Like many entrepreneurs, he persisted for over two years before realising it wasn’t going to scale or become profitable, at least not without large infusions of cash to drive traffic to his website.

“In the B2C model, if even two out of 10 customers returned a product, our margins would get wiped out. It was not a sustainable model,” he admits. It was a sobering thought. Siddharth did not want to raise VC money just to keep the business going. But failure was not an option.

As LinkedIn Co-founder Reid Hoffman once said, “An entrepreneur is someone who will jump off a cliff and assemble an airplane on the way down.”

Siddharth’s ‘airplane’ was the B2B aspect of his business. A closer look revealed this could well be the cash cow he had been looking for, and it was time to put his energies into developing it. Instead of customising one piece, they would customise 10 or 100 or even 1 lakh pieces. Ambitious, to be sure.

While customised T-shirts remain their best-selling options, the Delhi-headquartered Champu has also expanded to include shirts, hoodies, sippers, mugs, and more.

A friend in need…

Champu has several competitors, including the likes of the much larger Alma Mater and brands like Bewakoof and WYO within the custom-branded clothing segment in ecommerce. The competition is fierce. So, what helps them stand out?

“We have created a niche in delivering large orders at short notice,” points out Siddharth, “Many of our orders are from students and even companies who have been left in the lurch by their original vendor.”

This is where Champu steps in to deliver orders running into thousands of custom-printed T-shirts in as little as 24-36 hours, thanks to partnerships with a network of manufacturers in several cities, not to mention major airlines. “We can deliver to all the major cities in 24 hours.”

However, working with large vendors also has a small drawback. They prefer to work only with large orders, and sometimes will not execute smaller ones where there’s a request for additional customisation.

And Siddharth – whose family has been in the business of threads and fabrics for 40 years - did not want to tell a customer their order could not be accepted.

“It demotivates the Sales team, and it is like leaving money on the table,” he says.

That’s when he hit upon the idea of setting up their own manufacturing unit. The setup, inaugurated last month, can make over 300 T-shirts a day.

“It is meant to manage the spill over of orders that vendors cannot or do not want to execute, especially where additional customisation is involved,” explains Siddharth, adding, “We are not competing with manufacturers. Demand will determine if the unit grows or not. It’s an experiment.”

Eyes on the prize

And experimentation is something the company is constantly doing. It’s where Siddharth, who earlier worked as a management consultant at companies like Accenture and Integreon, ploughs in all his profits.

“There is no point in taking money home,” he says, “If that was my motive, I wouldn’t have quit my job and become an entrepreneur. Fortunately for me, that dependency is not here.”

He adds, “We are cashflow positive. And whenever we see a profit coming in, we deploy it in the business itself and maybe hire a couple of Sales folks.”

The right talent, especially in Sales, has been hard to come by and even more difficult to retain. It’s one of the reasons that Siddharth is focused on expanding traffic to their website by at least 10x this year, if not more. It’s something he has taken a keen interest in from the beginning and made sure that traffic is an optimum mix of organic (via the right search engine optimisation techniques) and paid (via Google ads). While he is happy with the established run rate, Siddharth said he would prefer not to share numbers for the business at this time.

According to a report by consulting firm Technopak Advisors, the Indian T-shirt market was estimated at Rs 23,211 crore in 2017 and is likely to grow nearly 3x to Rs 61,954 crore by 2027. This was further backed by a report from Credence Report in March 2018, which said that India is set to register the highest growth rate for T-shirt sales in the region in the next five years.

Champu’s biggest challenge, perhaps, is payments. While many customers agree to their terms of paying 50 percent of an order value at the time of placing the order, many companies say it is not their policy to do so. This means that the company carries the risk of an executed order being rejected for some reason. At the same time, as it tries to grow the business, it is not in a position to dictate terms to very large customers.

On the bright side, however, Siddharth says that they are yet to come across a customer who has refused to pay outright.

To succeed as they scale, the founder wants to streamline Champu's customer service to ensure that any and all complaints or clarifications are sorted out immediately and to a client’s satisfaction. Also in the works is a tool to automate small orders of 5-10 pieces so that the Sales team can focus on converting larger orders.

Artelus is using AI to save people from going blind. Here's how