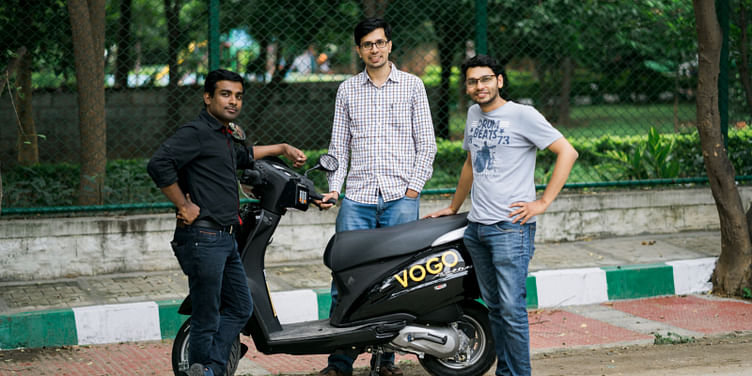 Last-mile mobility company Vogo is working with several electric vehicle vendors and battery management companies and has big plans to scale up over the next three years, its co-founders tell YourStory Business Editor Vishal Krishna.

Last-mile mobility company Vogo, which has more than 4,000 two-wheelers on the road and serves over three million rides per year, caught the attention of Pawan Munjal, of Hero MotoCorp, in 2018. He, along with Ola, Stellaris, and Matrix Partners, invested Rs 63 crore in Vogo recently. Since then, the scooter rental platform has been quietly experimenting with over 200 electric bikes in Bengaluru's HSR Layout.

In a candid conversation with YourStory Business Editor Vishal Krishna, Anand Ayyadurai, Founder and CEO, and Padmanabhan Balakrishnan, Founder and COO, reveal their strategy on electric vehicles and how Vogo plans to be a leader in urban mobility. Watch this video interview, where the Vogo co-founders also speak about their background -- launching their first vehicle at a college event in Chennai, how the next five vehicles came about, and the angel investors who came on board -- and the EV company's plans for the future.

Founded in 2016 by Anand, Padmanabhan, and Sanchit Mittal, Vogo offers on-demand, IoT-enabled scooters in Bengaluru and Hyderabad. Customers can pick up and drop their scooters at any point within the city, and use Vogo to get to work or to access public transport.

Speaking about how they started on this journey, Anand says:

“We wanted to figure out how we could reduce vehicles in the country. We wanted to offer on-demand assets that everyone could use. We started out with scooters and cars, but then decided to focus on scooters. Along the way we realised that a large opportunity lay in allowing people to pick up the vehicles and then drop them off anywhere. We soon developed locking/unlocking mechanism that helped us scale in a big way.”

Vogo scooters work with swapabble and fixed batteries. The company is working with over eight vendors and has big plans to scale up over the next three years. It faces off with the likes of self-drive bike rental platform OnnBikes, which is working with a similar strategy in Pune and has invested in close to 1,000 electric bikes.

The Vogo founders believe that the time of electric mobility is round the corner because the cost of running an EV stands at one rupee a kilometre whereas running a fuel-based vehicle costs about Rs 4 per kilometre. They say economies of scale will happen the moment the government offers relevant support for infrastructure and electric vehicle manufacturers understand what works in terms of battery and motors for scale. For example, most EV companies are building bikes with a 1.5 kW motor. The industry is drifting between fixed and swappable battery infrastructure, but bikes and three-wheelers may soon move to the swapping model.

“Urban mobility is a very nascent industry and we continue invest in tech that can make it easier for customers,” says Anand, Co-founder of Vogo.

According to Society of Indian Automobile Manufacturers (SIAM), there are close to 100,000 EVs in India. The market is poised to explode as the government currently gives subsidy to low-cost electric bikes.

Also read: Ola, Mahindra, Bounce: Meet the companies lighting up the road for electric vehicles to go the distance