Entrepreneur, intrapreneur: 15 tips on how large firms can tap innovators 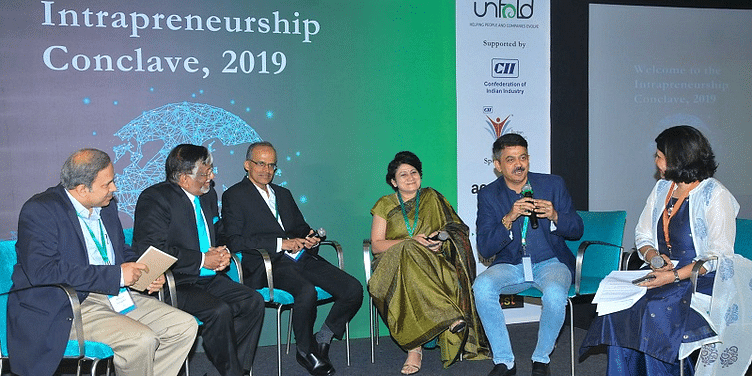 The Intrapreneurship Conclave 2019 showed how innovation and risk-taking can be promoted in large firms by connecting to startups as well as internal creative teams. India needs as many intrapreneurs as entrepreneurs, according to the speakers.

Combining the founder mentality and agility of startups along with the scale and industry connects of corporates can open up new frontiers of innovation, according to a range of speakers at the Intrapreneurship Conclave 2019. It was hosted in Bengaluru by consulting firm Unfold and supported by CII.

Companies like Google and 3M are widely regarded as being successful in intrapreneuring, as seen in innovations like Gmail, Google News, AdSense, and PostIts. These product lines are credited to practices like giving employees time off to work on pet projects.

Intrapreneurs should not be dismissed as troublemakers or misfits, they should be seen as dreamers and mavericks who can transform a company’s fortunes, according to the speakers. Here are my key takeaways from the second edition of the conclave; see also my framework of 15 innovation tips: how large corporations can successfully engage with startups.

1. Intrapreneur and entrepreneur: best of both worlds

Companies like Bosch are successfully tapping innovative ideas from the outside as well as in, explained Debasis Goswami, Head, Open Innovation, New Growth Programs, Robert Bosch Engineering and Business Solutions. It avoids the “graveyard of pilots” by engaging business heads as well as potential customers for innovative ideas.

The external initiative is called DNA (Discover, Nurture, Engage), and is an accelerator programme for startup cohorts in 16-week periods. Internally as well, hundreds of ideas are submitted by employees, but structured ideation and team selection is used for technology development and business traction.

2. The startup edge: culture change to stay ahead of the curve

Working with startups helps corporates ride the wave of digital transformation, according to Nirupa Shankar, Executive Director, Brigade Enterprises. “If you want to lead, you need to stay ahead of the curve and keep your ear to the ground,” she explained.

The company’s Real Estate Accelerator Programme (REAP) has graduated over 20 startups across five cohorts already, since its launch in September 2016 (see our profile of REAP here). Over 60 percent of the graduated startups are working with Brigade. Domains include clean-tech, AR/VR, IoT, smart buildings, and smart city. REAP’s industry partners are Microsoft, Bosch, Cisco, and CBRE.

Startups selection factors span business contribution, future investability and even coachability. Brigade managers’ new KRAs include embracing innovation and going out of the way to help cohort startups, who may face unexpected issues in terms of family and finances.

From internal and external contexts, there is a strong need for intrapreneurship in large organisations. Businesses need to become environmentally sustainable, inclusive, diverse, agile, and digitally transformed. They also need to become more cross-functional and multi-disciplinary in problem-solving, and be able to find non-traditional partnerships in the pursuit of new business models.

Companies like Ingersoll Rand India hired employees who had entrepreneurial skills to work in the head office for two years and then set up solutions businesses in new Tier II or III cities, according to Venkatesh Valluri, Founder and Chairman, Valluri Technology Accelerators and Valluri Change Foundation.

Intrapreneurs are those who are creative and critical thinkers, can work in unpredictable circumstances, take initiative and ownership on their own, and navigate the corridors of power and politics in large firms. They are self-starters, and convert their passion into concrete projects.

They are able to cultivate influencers in the corporate ecosystem, and align their individual ideas with overall company objectives. Intrapreneurs have grit, resilience, and risk appetite, which helps push beyond the phase of ideation and early prototypes. This enables survival in a VUCA world, according to Shirin Salis, Vice President - HR, Ingersoll Rand India.

Intrapreneurs have a growth mindset, and help the parent companies not just leapfrog into new business spaces, but pole-vault into them, particularly in the age of digital disruption. Intrpraneurs don’t just work beyond their usual job description, they even re-write these specifications.

A useful framework to assess maturity of organisational intrapreneurship is the ‘4 Ps' framework, according to Puja Kohli, CEO of Unfold Consulting (see my summary in Table 1 below). This consists of purpose, principles, people and practices. Purposes can include geographical expansion or new product development. These are driven by principles such as decentralisation, local innovation, and deeper engagement.

People skills for intrapreneuring can be built via mentoring, training, new competency frameworks, and leadership support. In practice, this can be achieved by incentive programmes, new performance metrics, cultural transformation, and collaborative platforms. Examples include HCL’s Value Portal and MAD Jam, as well as Cisco’s ThingQbator. Hackathons and hackfests are other common approaches. Such initiatives need to be branded and promoted appropriately.

CampX was opened last month, and a similar centre will be opened in Bengaluru later this year. The co-creation initiative will combine experimentation with accountability, as innovators flesh out specific solutions for big audacious goals such as reducing carbon footprints by 50 percent, according to Kamal.

7. Standardisation along with innovation

Corporates need to balance free flowing innovation along with standardisation and alignment. For example, Toyota has standard operating procedures, but employees are encouraged to innovate and improve these procedures.

Managers are expected to continuously drive such innovation and create new standards, according to Sreekanth Arimanithaya, SVP at DXC. Employees are given training in standardised processes as well as innovation techniques like TRIZ, he added.

Some corporate intrapreneurship initiatives are structured by top-down directives, others promote bottom-up innovation by employees. It is difficult to order people to collaborate across boundaries, but this kind of collaboration will be the new way of working, according to some of the speakers.

While top-down initiatives may seem more focused, the diversity and scale will be opened up only up by bottom-up participation. Similarly, internally-generated ideas may have broader appeal outside parent tech stacks, and outside innovators may offer better value proposition for current customer networks.

Disciplines like knowledge management can help develop competencies in these four types of innovation flows, via compilation of best practices, communities of practice of intrapreneurs and startup alumni, and AI tools for optimising performance (see YourStory’s writeup on CII’s Knowledge Summit 2019 here).

Employees should be incentivised to experiment and innovate, and not be penalised for failure. Following a stage-gate process, rewards can be given at each phase of their innovation attempts, so that due credit is given for effort, according to Abhijeet Saungikar, Head - R&D, Industrial and Consumer Business Group, 3M India.

Some companies regard failed hackathon experiments as “heroic attempts.” See also my reviews of the related books on failure in this regard: The Other “F” Word, Adapt, The Up Side of Down, The Wisdom of Failure, Fail Better, Fail Fast, and Failing to Succeed.

Innovation should not be left only to the innovation department, and people should not stereotyped or pre-judged about their ability to innovate. “Innovation should be mainstreamed,” advised Sreekanth of DXC. From the janitor to the CEO everyone can innovate, he said.

Companies should invest in training employees in creativity and innovation. They should not focus only on those who have creative or extroverted personality types. Even those whose initiatives may not succeed come out of the intrapreneurship programme with a more holistic view of the business. This can be a powerful engagement and retention tool, explained Chandrashekhar Raman, Global Lead, thingQbator programme, Cisco.

Some companies expect intrapreneurs to find time to work on new ventures over and above the normal job duties. Alternatively, they can be given partial time off from regular work to pursue innovative ventures, or even be allowed to move fulltime into these new projects.

Participating in industry research initiatives is a useful way for companies to assess and improve their intrapreneurship programmes. Unfold Consulting has partnered with Unisys for a research report on intrapreneurship, and Accenture for a report on corporate accelerators.

Despite having clarity on the above framework for intrapreneurship, many companies face roadblocks along the way, according to Avnish Sabharwal, Managing Director, Accenture Ventures and Open Innovation. These arise from difficulty of integrating radical ideas into the existing “mothership,” lack of incentive to cooperate across vertical lines, and fear of failure by employees who do not want their performance appraisal to be adversely impacted.

Some companies may at best tolerate failure, but celebrating failure is an altogether different dimension. Some top managers are also uncomfortable with dissent, Avnish cautioned. Intrapreneurs also don’t have as much risk appetite or uncertainty tolerance as early-stage entrepreneurs, who do not have the luxury of a corporate safety net and a regular paycheck. Entrepreneurs are like well-diggers (who may not find water), whereas intrapreneurs are like plumbers (who know there is water but just have to re-route it).

Furthermore, some companies’ startup engagement approaches are largely limited to “startup tourism” and “startup zoo,” Avnish observed. There is also a “PoC mafia,” who expect startups to do proofs of concept for free, he cautioned.

Product management is a step towards intrapreneurship, according to Pinkesh Shah, Executive Board Member and Senior Faculty at the Institute of Product Leadership (IPL). It helps engineers think beyond technology issues to design, customer connect, and business value. IPL aims to create 10,000 intrapreneurs in the next few years, Pinkesh said.

Making big bold products also delivers greater satisfaction over the long run, if innovators heed their calling. “Intrapreneurship takes you outside you comfort zone, and work on the impossible,” said Manish Gupta, Co-founder and CEO, VideoKen, and Professor at IIIT Bangalore. “You will be known for a few big successes rather than many incremental successes,” he added.

Sometimes, the right idea can come up in the right industry, but is brought to market at the wrong time – either too later, or too early. For example, IBM Research came up with a model called Spoken Web, with voice sites in addition to websites.

This would have been a good fit for telco VAS in the 2G era, according to Manish – but by the time IBM moved on this, the industry had switched gears into the data-centric 3G era and the opportunity was lost. Perhaps this can be revived in the era of “video, voice and vernacular?”

The conference also featured case studies of two startups that were launched by internal initiatives at Bosch and SAP. For example, chatbot startup Inversation.io was incubated, launched, and scaled by SAP.io, according to co-founder Hemant Rachh.

It won the internal pitch competition InnVent, and built its solution on AWS and not only on SAP. It was ultimately chosen as one of two startups from a pool of 500 contestants from SAP.

In sum, intrapreneurship and accelerators benefit not just the parent organisation, but the broader startup ecosystem and the country as a whole. “India needs as many intrapreneurs as entrepreneurs,” said Anil Rao, Professor at WeSchool.

Also read: Intrapreneurs could drive the next wave of innovation in the entrepreneurial ecosystem. Here’s how