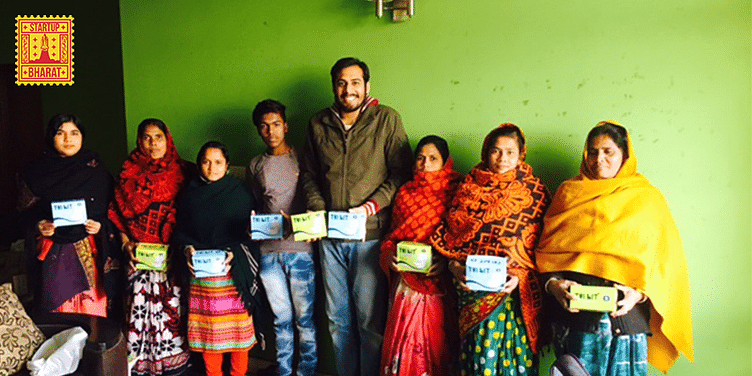 Have you taken a road trip recently and cowered in your car until you came by a decent cafe, instead of using a public restroom? It is no secret that public washrooms cannot set hygiene standards. It is common for people in India to give public loos, and bathrooms on trains and at bus stations a miss altogether because of how poorly they are maintained. This not just leads to a lot of inconvenience but also a slew of health issues.

Chirag Doshi was familiar with this problem given his extensive travels. Having worked with General Motors and OYO, travel was an integral part of his work, and with his family based in Kota, train travel was unavoidable.

“I found it extremely difficult to use any of the unhygienic washrooms. And even if you travel in AC first class, after a while, the washrooms become unusable,” says Chirag. The problem was a lot worse for his sister, Pooja Doshi.

Also read: [Startup Bharat] Inspired by Iron Man, these engineers have built a manhole-cleaning robot that can end manual scavenging

Problem at hand, and a solution in mind, Chirag and Pooja, along with their parents Rajesh and Amita Doshi, decided to start Toikit. Chirag’s parents already own a stone business in Kota.

Kota-based Toikit focuses on improving the sanitation condition of public toilets with innovative products. “Many times, the condition of the toilets is so bad that nobody wants to touch anything. So, to make things simpler, we designed a basic kit that consumers can use and dispose,” says Chirag.

“It is a complete solution to use any public toilet, and solves four major problems - wet and dirty toilet seats, unhygienic surroundings, foul smell, and fear of catching urinary tract infections,” says Chirag.

Also read: [Startup Bharat] NR Narayana Murthy reveals what it would take for Hubli startups to be No. 1 in India at Sandbox Hubli’s Startup Dialogue 2019 event

The brother-sister duo started Toikit late 2017, and focused on tie-ups, procurement, and manufacturing with different local vendors in Kota.

While Chirag was based in Gurugram for work, he decided to start up in Kota, as the team was bootstrapped. Also, he explains, the cost of setting up and running a business as well as getting vendor connects were easier in Kota.

Focussing on tie-ups and sales partnerships, ToiKit was able to catch the attention of organisations such as the Indian Railway and Indian Oil Corporation.

At present, operations are run by Rajesh and Amita in Kota, while Chirag and Pooja run the sales, marketing, and partnership efforts out of Mumbai. Pooja also works as a chartered accountant, while Chirag works part-time as a consultant to help bootstrap the company.

The team currently sells its products online on Amazon, Flipkart and its own website. The basic kit, which comes in a pack of 10, is priced at Rs 150. Each pack has a single-use kit of gloves, toilet seat wipes, seat cover, hand wash and hand sanitiser. Another variant, which also includes seat sanitiser ,and sanitised seat cover, is priced at Rs 350 for a pack of 10. The team claims it gets over 150-200 packet orders in a month.

ToiKit already also offers intimate hygiene wipes as well, and will also look to expand in that category. The female hygiene product market is believed to be growing at 13 percent, and according to Markets and Research, it is pegged to touch $42.7 billion by 2022.

Other products in the segment include Be.The Solution, which curates women-centric personal hygiene products, in addition to sanitisers, wipes, and gels that focus on sanitation. Larger FMCG players like HUL, P&G and Marico are also entering the space with a range of products. Startups like PeeBuddy are also focussed on the space.

But Chirag has big plans for ToiKit, not all of which are based on profit and growth: "We want to open a chain of premium pay and use public toilets, either by building them or by being an aggregator, and 10 percent of the profit from which will be used in the development of toilets for poor people. It would be an important step towards improving the sanitation condition of rural India, followed by mobile and portable toilet segment.”