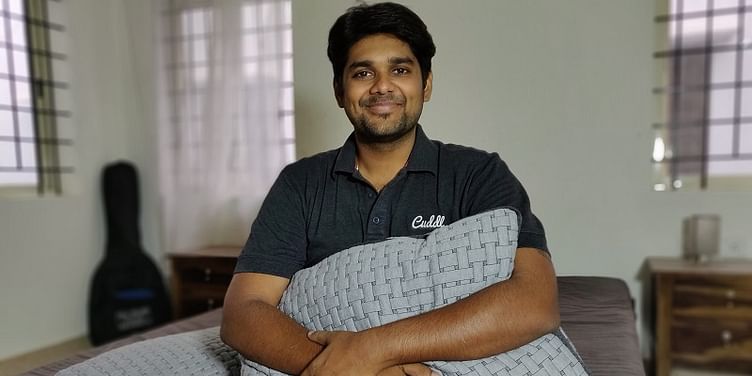 A long, deep sleep can cure almost anything, but it remains elusive. Enter Cuddl, which offers pillows that promise to help India sleep better. In this video interview with YourStory Business Editor Vishal Krishna, Founder Shashank Palli reveals why pillows are important.

Eighty-hour work weeks universally have one casualty: sleep. Most adults never get the seven to nine hours of shuteye they need, and this sleep deficit can translate into health consequences. Sleep deprivation can put one at risk of weight gain, diabetes, heart disease, stroke, and memory loss.

But help’s at hand.

A host of startups – in India and abroad - are working to make innovative sleep-related products that can promote better sleep. Among them is Shashank Palli, an IIT-Kanpur graduate of the 2011 batch, who believes “sleep is the energy we invest in for tomorrow” and is trying to harness it in a lab.

In Bengaluru, Shashank is hard at work testing sleep cycles of individuals who agreed to experiment with his pillow - which he claims helps one sleeps long and comfortable. Shashank is the Founder of Bengaluru-based Cuddl, which is using design thinking to deliver “simplified and elevated sleep experiences”.

In this video interview, he reveals why his startup is focusing on pillows, how the design sets it apart, and what the future holds.

Founded in March 2018, Cuddl went into operations only six months ago. Its flagship product is a natural shredded latex pillow with an adjustable loft for proper spinal and neck alignment. The multilayered design offers the perfect spinal alignment because the pillow accommodates to “individual sleep positions, body types, and mattress density”.

“When was the last time you remember a name of a branded pillow? It is a category dominated by a polyester manufacturer and most pillows last you less than a year because the material collapses. However, there is an awakening since people want to invest in their sleep. People are investing in mattresses that enable good sleep, and pillows are part of that journey, too,” Shashank says.

“I called it Cuddl because you could never cuddle a block of foam. A pillow should be a mix of shredded foam that gets used to your sleeping position. The durability is the key.”

Today, the product is sold only on ecommerce channels like Amazon, and Shashank plans to retail in physical stores only “after the company achieves scale”.

Also read: How did Wakefit earn Rs 114 cr revenue in 3 years? By helping customers get a good night's sleep

After graduating from IIT, Shashank went on to build a career in FMCG. He worked in P&G and helped set up a couple of plants across the world. Soon after, he founded LightFaber in 2013, a 3D printing company for enterprises, and also set up a SaaS company in 2015. While running this for two years, he realised that people would complain about a lack of sleep, and often showed up to work tired.

He began his own research in 2017 and also visited a pillow manufacturing unit as part of it . He soon realised that pillows were not designed to support sleep, and that most manufacturers were paying very little attention to sleep cycles.

The wheels of an idea were set in motion. Shashank began to conceptualise a product that would make pillows more aspirational rather than a tick box in a bedroom.

By December 2018, the Cuddl brand was born. All Cuddl pillows focused on the core, the heart of the pillow, and provided a supportive and plush bounce. The outer pillow shell offered protection from dust and mites, prevention from sweat and odour, and a long life. The fact that their pillows are built for spinal alignment sets them apart, the founder believes.

“Our adjustable pillows put you in control, not the other way around,” Shashank says.

According to the NHS-UK, regular poor sleep puts you at risk of serious medical conditions, including obesity, heart disease and diabetes, and shortens life expectancy.

Cuddl gets its product manufactured from a contract manufacturer in Southern India. Sales have been growing consistently, but Shashank does not want to reveal sales numbers as yet. As of now, he is getting his sleep numbers from people using sleep trackers and is working to better the design of his product.

The company competes with mattress companies that sell their own range of pillows, including Kurlon and Peps, and sleep-focused startups like Wakefit, Wink & Nod, Sleepy Cat, and Sunday. Shashank, who bootstrapped his business with a capital of Rs 15 lakh, is currently looking for investors.

His aim is to evolve “into a sleep solutions company”. His short term plans are to increase sales of his current set of products. Over the next two years, he wants to bring in technology that can holistically explain sleep and offer customized products for individuals.

The opportunity is huge. And Cuddl is not losing any sleep over what it can do to tap it!