WATCH: How IIT Madras-incubated GUVI is bridging the language divide and making life easy for recruiters 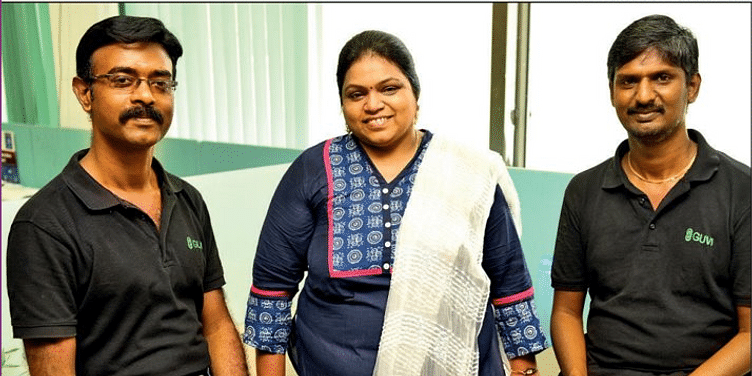 Meet the founders of GUVI, an online platform that lets engineers and developers learn the most in-demand programming skills in Indian languages. Here’s how they ensure recruiters know exactly what they’re getting. (Hint: It’s not just a report card.)

The term software developer typically conjures up images of English-speaking urban men. This has almost become a stereotype because, well, there is some truth in it, but now it needs to be changed in more ways than one.

The National Employability Report for 2019 showed that close to 80 percent of engineering graduates in the country are not ‘employable’, either at product companies or in the software industry. The impact of this is higher when it comes to rural students, given the lack of exposure to technical skills that are most in demand. The challenge, then, is to change the industry and make it more inclusive in each and every aspect.

Enter GUVI (Grab Ur Vernacular Imprint), an online platform that enables engineers and developers to learn in-demand technical skills in Indian languages to make learning more meaningful. Their mission is to ‘make technical education available to all in their native languages’.

“It’s Telugu-ish (Telugu + English), Tamil-ish, Hindi-ish. It’s not a crude word-by-word translation, but how we would talk to our friends - in a colloquial manner - to understand anything. That’s what we apply to the learning aspect.”

Also read: GUVI’s origin story – how a small-town boy from Tamil Nadu started a vernacular platform for IT learning

Language is just a medium

GUVI offers courses for some of the most in-demand skills today: Android, Python, Java, C, C++, Machine Learning, Big Data and MongoDB. The real focus, though, remains on making learners ‘employable’ – a problem that a big chunk of Indian technology graduates face.

As Founder and CTO Arun Prakash puts it,

“The idea is not to teach in vernacular. It is to teach them skills. There is a big gap between academia and industry. That has to be bridged in a better and faster way.”

GUVI does this by separating the technology component from the language component, and taking the learning forward from there. ‘Language’ therefore, is merely a tool to teach a technological skill.

But that’s not where it stops. Students are tested on the platform, and work on projects that potential employers can review.

This way, companies can get the best candidates because they are not looking at just a report card, because here, your code speaks for you.

GUVI also employs a full stack ‘phygital’ approach involving learning, mentoring, assessment and placement services. It has tied up with IT product companies that are looking to hire technical talent to helps students find a job, irrespective of their physical location.

At the same time, to nip the skill gap closer to the source, GUVI has also partnered with colleges to conduct boot camps to get students going. While teachers and parents were initially sceptical, the co-founders say students have loved the whole concept from day one.

The in-person sessions also feature mentors with extensive industry experience, who share their expertise. GUVI’s offerings are blended into the college curriculum, so students can take them to gain course credits.

While GUVI has bridged the language gap, what’s notable is that half the 1.5 lakh developers they have trained are women. Over 5,000 of them have been placed in good positions at startups and product companies. Says Sridevi, Co-founder and COO,

“Bridging the gender gap in IT has always been GUVI’s priority.”

GUVI also has Zen Classes where they get industry mentors from top tech brands to give their developers three months of hands-on experience. This helps the participant network to keep up to date with the latest happenings in the industry.

The startup is also ready to cater to the gig economy. According to Arun Prakash,

“A lot of companies come and ask us whether we can get developers as part-timers and interns and get specific amounts of money for specific tasks.”

Seeded with an initial capital of Rs 10 lakh, the startup was incubated at the Rural Technology and Business Incubator (RTBI) based out of IIT Madras. The startup first raised seed funding of Rs 5 lakh, and officially launched in November 2014. Its first paid customer came through YouTube.

“The target which we have set is to create 1 million coders in the next 18 months...across languages and genders.”

Helping achieve this goal will be the Rs 1 crore funding it recently raised in its first institutional round from impact investor Gray Matters Capital.

Commenting on the investment, Aarthi Ramasubramanian, Senior Investment Manager, Gray Matters Capital edLABS, said that what GUVI does, “will not just improve employment prospects, but will also potentially pave the way for more technology start-ups to emerge from Tier II and Tier III centres as coding becomes a critical skill to possess for product efficacy.”

Balamurugan says that to achieve their goals, they need to tap more partners like engineering colleges beyond south India, and increase the number of corporate recruiters they work with.

GUVI has also tested the waters in Southeast Asia and will launch something there soon. It has already rolled out courses in Arabic following strong interest from the Middle East.

Watch Vishal Krishna speak to the founders of GUVI about their future plans, the new courses they have in store, and how they maintain laser-sharp focus on making an impact.

(This article has been updated to correct the amount of funding that GUVI has raised.)