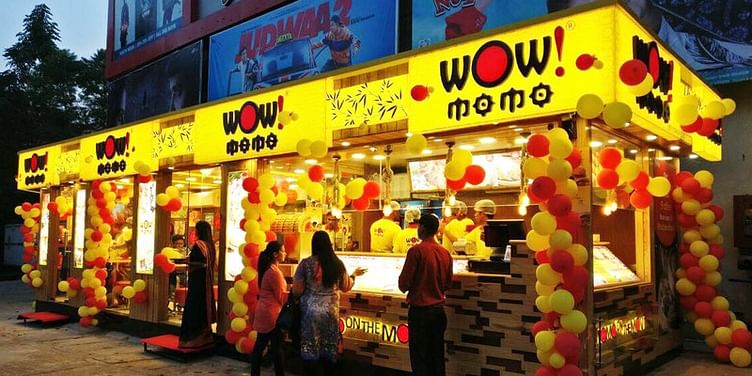 Success has only whetted Kolkata-based Wow! Momo’s appetite. The QSR startup has launched a second brand, Wow! China, and is looking at raising funds, launching a range of packaged and frozen offerings, and ultimately working towards an IPO.

Started in a garage by two students of St Xavier’s College, Kolkata-based Wow! Momo has been dishing out dumplings, dim sum, and more for over 10 years now. With 254 outlets across 13 cities, the startup is now gearing up for the next chapter in its story.

Backed by investments from Info Edge Founder Sanjeev Bikhchandani, former Infosys CEO Kris Gopalakrishnan, and Hero Enterprise Chairman Sunil Kant Munjal, among others, the startup claims to have “90 percent of the market share in the organised momo business”. Now, the quick service restaurant (QSR) chain has major expansion plans and is even eyeing an IPO.

“The perception of health and hygiene sells. Selling roadside food in a hygienic way is our USP. We made roadside momos into a brand,” says Wow! Momo Co-founder and CEO Sagar Daryani, catching up with YourStory at the startup's flagship outlet on Kolkata’s iconic Park Street.  The other co-founders of the Kolkata company are COO Binod Kumar Homagai and CFOO Shah Miftaur Rahman.

After successfully building the Wow! Momo brand, the startup is now looking to strengthen its second brand, Wow! China, launched earlier this summer. The commerce graduate says the company is focusing on “Chindian” cuisine, the Indianised version of Chinese cuisine that is popular in India. Chinese food is the second most popular cuisine across North and South India, he points out.

According to a  FICCI and Technopak report, the food services market in India is expected to reach Rs 5.52 trillion by 2022.  The reports also highlights that Chinese cuisine is the second most non-domestic cuisine consumed in India.

“We expect the margins and profitability for Wow! China to be higher than Wow! Momo. Over the next four years as we reach a topline of Rs 1,000 crore, we see Wow! China contributing one-fourth of the revenues,” Sagar says.

The brand’s revenue touched Rs 120 crore in FY19. It aims to hit Rs 200 crore this fiscal, which the startup is well on track to achieve, Sagar adds.

Speaking on why they decided to launch a second brand, he says, “Given the popularity of Chinese cuisine we asked ourselves: why can’t we do it? We make our own sauces, do our own gravies, nothing is outsourced. We have our own in-house dough (for momo, noodles etc).”

Plenty on their plate

The startup at present has outlets in Kolkata and its suburbs, Mumbai, Delhi, Gurugram, Noida, Faridabad, Ghaziabad, Bengaluru, Chennai, Cochin, Bhubaneswar, Cuttack, Puri, and Rourkela. Pune, Goa, and Hyderabad are soon going to be added to the map.

The startup aims to open 140 stores during the current fiscal year - 100 of these will be Wow! Momo outlets and 40 will be Wow! China ones. It also plans to open cloud kitchens (six in Bengaluru and two in Chennai) this year to reach customers through online foodtech platforms such as Zomato and Swiggy. Last year, the startup opened 81 Wow! Momo and three Wow! China outlets.

As far as competition for Wow! China goes, Sagar says “much like with Wow! Momo there is no other national brand that operates across the country”. Global QSR brand Wok to Walk, which is now in India, is mostly restricted to the national capital region (NCR), with one outlet in Kolkata. Jubilant FoodWorks, which operates the Domino’s Pizza and Dunkin’ Donuts restaurant chains in India, has also recently made a foray into the space with the launch of Hong’s Kitchen restaurant in Gurugram.

An eye on supermarkets

The company is also working on a technology to sell “chilled momo” in supermarkets, on the lines of the “supermarket sushi” concept overseas, Sagar says.

“If you go abroad you’ll see they have frozen momo/dumplings. Since the USP of Wow! Momo is the fact that we prepare and sell fresh momos, we are working on a technology where we can prepare momos that have a shelf life of 100 days,” he adds.

Sagar does not fear any cannibalisation of its existing momo offerings with this move, and says the two products would cater to different needs and customers.

The company is also setting up a plant in Kolkata by December-January to manufacture and retail sauces in the market. “Our red sauce is extremely popular and people actually ask for it to be packed so they can take it home and have with various things such as paratha. We figured there is an opportunity there waiting to be tapped,” Sagar says. He expects the sauces to be available on retail shelves by 2020.

Wow! Momo plans to launch “authentic Darjeeling momos” in July. “There were several enquires and after some deliberation we decided to go ahead with it,” Sagar says. The Darjeeling momo has a very distinctive flavour, and the startup decided to launch this offering seeing customer interest.

There are other offerings in the pipeline too, including gluten-free momos. As far as diversifying from “Chindian” to authentic Chinese cuisine is concerned, Sagar says that may happen in the next five years.

An IPO in the offing

Wow! Momo plans to raise between Rs 120 crore and Rs 150 crore in its Series B round and has hired EY as its banker. “We have seen phenomenal interest from funds and have started talking to some of them. We are looking for a long-term partner to work with us,” Sagar says.

The company earlier raised an angel round for Rs 10 crore from Indian Angel Network (IAN) in 2015, followed by a Series A round of Rs 44 crore from IAN, Lighthouse Funds, and Fabindia’s William Bissell in 2017. The startup also plans to list itself on the Indian stock markets in the next five to six years, and is looking for an investor that will stay on till the IPO.

A bite of the international market

The company has registered itself in more than 80 countries and wants to go overseas with its business. But, it will focus on the domestic business for the next five years.

Sagar says: “We’ll definitely look at Dubai and the GCC countries (Saudi Arabia, Kuwait, the UAE, Qatar, Bahrain, and Oman). Expansion will also extend to Sri Lanka, Bangladesh, and other neighbouring countries. In fact, we have received several inquiries from Pakistan and Nepal.”

Sagar shares an interesting anecdote on how the brand’s popularity has transcended borders. “I started getting some congratulatory messages for opening an outlet in Bangladesh. When we dug deeper we found someone was using our brand name and logo to sell momos there. We have filed a lawsuit against her,” he adds.