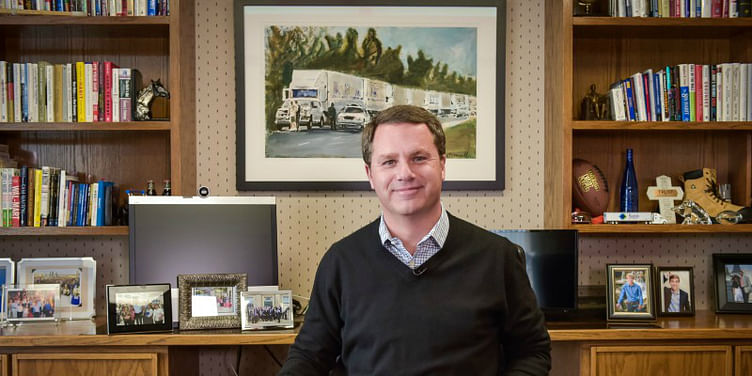 The head of the world’s largest retailer, Doug McMillon, tells YourStory Founder Shradha Sharma how he plans to grow Walmart, his plans for India, and why speed is vital.

Doug McMillon joined Walmart in 1984 as an hourly summer associate at a distribution centre. He then went on to have successful leadership roles in all of Walmart’s segments. From 2009 to 2014, Doug was the President and CEO of Walmart International - before he took over the reins as the head of the company.

“I was blessed and ended up getting some exposure to this company from a young age,” he says, now more than five years into the job.

Since taking over, Walmart has grown by leaps and bounds. The company’s stock has risen 50 percent since February 2014 and revenues have grown to $ 514.41 billion for 2019. Walmart employs over 2.2 million associates around the world, but has somehow managed to keep its homely Arkansas roots close to its heart.

“Walmart is a big company but sometimes it doesn’t feel like it,” McMillon says.

In Walmart’s annual letter to shareholders, he speculated that if Walmart’s Founder, Sam Walton, was around today, he would also be aggressively adapting to the changing times. In the same vein, McMillon is setting his sights on how to grow the company further by expanding in ecommerce, investing in customer experience, as well as shipping and delivery.

In a question posed by YourStory Founder Shradha Sharma, the Walmart CEO discusses at length the thing that keeps him up most at nights.

“That answer would be speed.”

Walmart has been investing heavily in improving its speed, particularly in its ecommerce capabilities. Amazon has dominated that space for years now, and the US retailer has been forced to play catch-up through its acquisitions of Jet and Flipkart in India.

The company is also upping delivery options across the United States. Walmart offers free one-day delivery on 220,000 items in their online store, with a value over $35 in certain regions. By the end of 2019, the company expects delivery to be available across 75 percent of the country.

“As a company, we have got to move faster. The world is not going to slow down and wait for us. And it’s not going to operate more slowly in a year or three years than it does now.”

McMillon recounts a time when he was speaking to former Walmart CEO David Glass, who took the reins of the company between 1988 and 2000 from Sam Walton. Glass was credited with much of Walmart’s early expansion from rural areas to suburbs and bustling cities, as well as recognising the potential of the internet and international markets.

Glass told McMillon that the retail landscape today seemed far more complex and faster than it was during his tenure. He didn’t know how McMillon managed it.

McMillon has pressed on in the company's competition with Amazon, as well as Walmart’s push into international markets to drive new revenue verticals. The company made its biggest, and some say riskiest, bet when it put in $16 billion to acquire Flipkart in India. Walmart is bullish on the country - it already has a thriving cash-and-carry business in various metros. It also sources a lot of products from India.

“India is so diverse and fascinating that I enjoy just going there. And I want to have a business that helps people in the country.”

McMillon dreams of working as part of a unified supply chain that benefits everyone in it - from farmers to customers. In India, Walmart has faced some stumbling blocks to its ambitions. Both Walmart and Amazon have faced tighter regulations from the Indian government, particularly on ecommerce companies selling products of companies that they have a stake in.

“We would like to invest more. We just want a level playing field, so just give us fair, consistent rules just like everyone else.”

Besides that, what keeps Walmart’s CEO up at night?

“Jetlag is the only thing that comes to mind that affects my sleep.”

Here's what Sadhguru has to say about life, stress, and loss

Story of the First Lady of Germany, of extraordinary gestures, and friendships that transcend b...