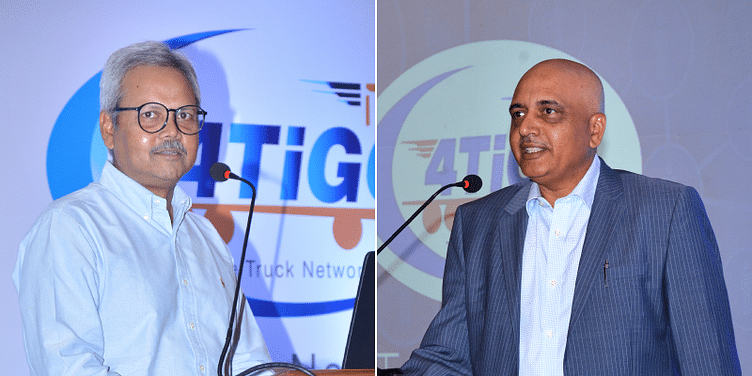 After its recent $10 million funding, Nandan Nilekani-backed Bengaluru-based B2B logistics platform Fortigo is aiming for a turnover of Rs 300 crore.

In 2015, when ecommerce boom hit India, logistics was the other sector that came into the limelight. At this time, several startups started making a beeline to solve problems in the supply chain and logistics space, enabling ecommerce players to reach the end-consumer.

Around the same time in 2015, IIT Kanpur alumni Vivek Malhotra and Anjani Mandal started Fortigo (4TiGO) to solve for the B2B logistics segment. The platform, which is a fleet management service for truck owners, helps them track their inventory efficiently, helps drivers plan their journeys, and reduce delays and in turn save logistics costs.

The Bengaluru-based startup also raised $2 million seed funding from Infosys co-founder and former UIDAI Chairman Nandan Nilekani and Accel Partners at the time of its launch.

Today, most issues have been solved in the B2B logistics space, which has leveraged technology to address the supply chain needs of large organisations – from last-mile delivery, warehousing, freight transportation, and demand forecasting among others. In retail alone, there is huge logistics at play just in terms of distribution and supply chain management.

And Fortigo, with 20,000 vehicles on its network, recently raised $10 million to provide its fleet managers with working capital loans. With this, it has raised a total of $12 million in funding.

The team now claims to have a yearly revenue run rate of Rs 150 crore, and says it is on the road to profitability.

“We call ourselves an ecosystem player. This means we help every player who is a part of the logistics ecosystem. Whether it is a consignor or consignee, transporter, fleet owner or fleet manager, all are integrated as a part of Fortigo,” says Anjani.

Before starting up, Anjani was the CEO at Manipal Technologies, and had also worked for the likes of Xerox India, Genpact Headstrong Capital Markets, HCL, and Pyramid Software. And Vivek worked for Symbiotic Sciences, HCL, Pyramid Software, Shyam Telecom, and a few other corporations.

Anjani says the founding team has a combined expertise of close to 40 years in the B2B segment. “We understood the gaps in B2B logistics and felt that a play of technology and offline expertise would help in organising the highly fragmented and unorganised space,” he adds.

Speaking of the complexity of B2B logistics as compared to B2C, Anjani says, “The B2B supply chain works differently. You have to have multiple suppliers in order to reach the end consumer.”

From factories and distribution units to retailers and their warehouses, end users, the supply chain network is vast and wide.

“This also gives us the opportunity to be capital efficient. We have a national network, which covers the top hubs. Most of the large shipping firms are our customers,” he says.

Adding a layer of capital

In its early days, Fortigo began its journey as a marketplace that connected truck companies to manufacturers. Later, it added a technology layer to help companies manage and look at their fleets. The team also realised that managing direct transportation would be essential as well.

“The biggest factor when it comes to B2B logistics is long-distance travel and transport. When it comes to tracking, fleet managers cannot have offices in every hub or location to track the process,” says Anjani.

Even in the trucking logistics segment, truck owners face several problems in terms of discovery, tracking, transaction, routing, and even safety. Thus, technology has the potential to add significant value to the complex supply chain space, as the cost of the fragmented market affects the whole supply chain.

Anjani says, today all major FMCG players are their clients, without disclosing the names.

He adds that direct transportation currently accounts for 55 percent of the startup’s total business, and by the end of the fiscal, the team says it will account for 70 percent of the company’s revenue.

Speaking about their foray into working capital loans, Anjani says,

“We realised that fleet managers faced an issue of working capital. These are small business owners, who need easy and quick access to extended working capital. There aren’t many banks or players that can provide working capital loan to these businesses. We already have strong relationships and partnerships with these owners, thus making it easy for capital access.”

According to Associated Chambers of Commerce (ASSOCHAM), India can save over $50 billion if the cost of logistics and transportation is reduced from around 14.4 percent of GDP to nine percent of GDP. Compared to this, other developing countries spend less than eight percent of their GDP.

India also ranks 35 in the World Bank’s Logistics Performance Index, underscoring the low efficiency of logistics in India, when compared to that in other countries. This also highlights the potential to make significant inroads to disrupt the large and growing logistics market in India.

The Indian logistics landscape is also fraught with challenges related to poor infrastructure owing to poor road connectivity amid a slew of regulatory hurdles, say industry experts. The understanding of the space is also limited, say investors, despite the growing crop of players in the field.

However, the logistics segment is fast picking up. In the first five months this year, the logistics sector witnessed a capital infusion of $6.25 billion across eight deals. That’s more than a six-fold increase from the amount it raised last year across 20 deals.

Other players in the space who raised capital include Bengaluru-based online trucking marketplace Blackbuck’s Series D round, and another $22 million raised by AI-backed supply chain optimisation startup Locus by Tiger Global.

“B2B, unlike B2C, isn’t a winner-takes-all market, especially in logistics, which is in itself a massive market. The space is large enough to accommodate $10-20 billion companies that can execute well, and generate strong revenues and bottom-line. This makes the space automatically interesting to us as investors.”

At present, Fortigo aims to be cash positive by the end of this financial year, and is hoping to generate a turnover of Rs 300 crore.