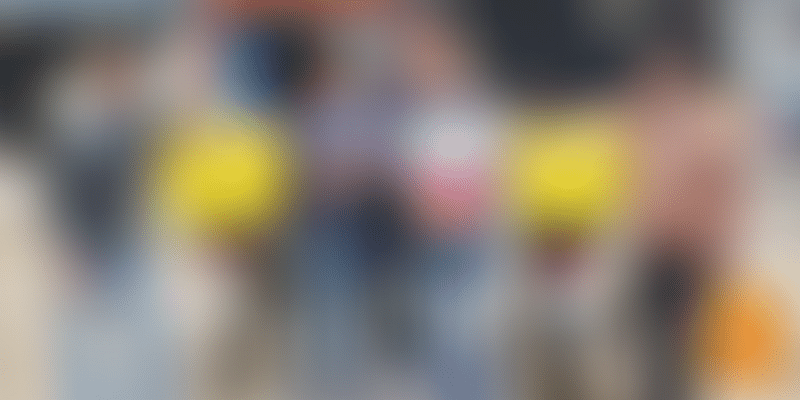 Started by nine students, Sikkim-based HungerBay is a food and grocery delivery startup that presently operates in three cities: Majitar, Rangpo, and Singtam.

Located in northeast India, Sikkim is characterised by its dramatic geography - the Kangchenjunga, landslides, plenty of rainfall, and even snow. But that hasn’t stopped Bhanu Bhowmik (27), one of the four delivery executives of HungerBay, from doing his job.

“We work from 10 am to 8:30 pm, not sure of when the next landslide will stop us,” Bhanu tells YourStory.

Originally from West Bengal’s Raiganj district, Bhanu landed in Sikkim looking for a way to make a living, and joined HungerBay.

Officially launching on March 4, 2018, HungerBay began with only two orders per day. Today, it fulfils upto 150 orders in a day. This June, it also launched its grocery delivery feature. At present, the startup delivers food and groceries in three cities across the state - Majitar, Rangpo, and Singtam.

Customers can order food from 20 partner restaurants, book tables at these restaurants, and order groceries on its app, which is available on both Android and iOS devices.

HungerBay also has a loyalty programme ‘Hunger Points’, which is currently used by 30 percent of its customers.

Starting up and the challenges

During the sixth semester of his software engineering course, Shamsh Ahsan, 23, realised that there was no aggregation of restaurant and food-delivery service in Sikkim. “I discussed it with my friends in college and asked them about their interest,” he recalls.

“Mostly because their parents did not support the idea and they did not share the same dream,” says Shamsh, who graduated from college earlier this year.

Now, only Shamsh and Abhishek (21), a mechanical engineer from the same college, remain as co-founders. The startup’s ground team consists of four delivery executives, one area manager, and one delivery head.

However, starting up in Sikkim came with its own set of challenges.

“Other than residents of Sikkim or Sikkim subjects, people from other states are not allowed to register their business here. And private limited companies from outside are not allowed to operate in the state until they have a trade licence,” Shamsh says.

To solve this, the team had to bring in a Sikkim subject to attain their trade licence and start operations. Their second challenge was the terrain. “There’s just one road connecting all the three areas we operate in and, often, delivery locations cannot be reached on bikes,” the co-founder adds.

Owing to poor network coverage, even Google Maps hasn’t been able to chart all the lanes of the area. For this, the team asks delivery executives to collect photographs of the neighborhood each time they deliver an order. This helps the company get visual markers and understand locations. The third challenge was poor network conditions.

“We are now working on an application, which can operate in areas with 2G connectivity,” Shamsh says.

Shamsh claims he has invested Rs 9 lakh in the company since inception.

“We took money from our parents and arranged some more from friends,” he says.

At present, the startup’s revenue mostly comes in the form of commission from restaurants, delivery charges from customers, and through advertisements on their app. The co-founder claims that HungerBay processes sales of up to Rs 5 lakh every month.

“Our growth rate has been slow because we have college between 9 am and 6 pm. Initially, we worked only after college hours and there were constricted funds,” Shamsh says.

According to Statista, the Indian food delivery segment is predicted to show an annual growth rate of 12.8 percent, resulting in a market volume of $12,536 million by 2023.

Biggies like Zomato and Swiggy are yet to enter the Sikkim market, and Shamsh says that it is their understanding of the terrain that will help them compete with the unicorns.

Locally, HungerBay competes with Mitho, a food and grocery delivery application that launched last year. However, the sector in Sikkim is highly fragmented and more players will actually benefit the state. Also, operating efficiency is what sets HungerBay apart from its competitors. “We are easily able to deliver within 35 minutes on an average,” says Shamsh.

While it may not be easy, Bhanu says the job satisfaction that keeps him going.

“Once during the monsoons, I was delivering an order and was not in the best of my moods. However, on reaching the customer’s doorstep, I was invited inside and offered food as well. That instantly made me feel better,” he recalls.

Now, HungerBay is looking to start operations in Kumrek, while Shamsh is also exploring opportunities in Jaipur and his hometown Patna. The team is also looking for funding. “We have divided our future plans in two phases – we will first cover Tier III cities and then expand to Tier II,” Shamsh says.