WATCH: From living on Rs 100 a day to closing in on Rs 100 Cr revenue in 7 years, the HealthifyMe growth story 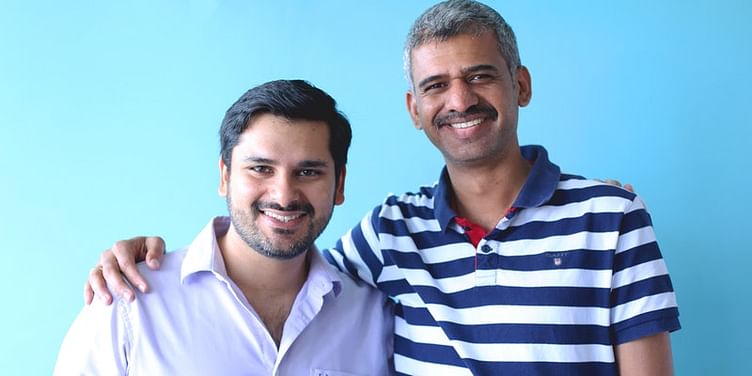 The HealthifyMe app combines AI and manual inputs to provide health and fitness services. The startup, co-founded in 2012 by Tushar Vashisht and Sachin Shenoy, began with an investment of Rs 15 lakh and aims to clock in Rs 100 crore in revenue this year. Watch the video interview with Tushar here.

Technology has led to a disruption in many industries, including health, education, and finance, across India. Bengaluru-based HealthifyMe is among the few startups to have innovated and successfully used artificial intelligence (AI) to increase its market opportunity.

The health and fitness startup combines technology and human services to deliver measurable impact for users via its mobile app. It was co-founded in 2012 by Tushar Vashisht and Sachin Shenoy, and has raised $25 million so far. From one million customers three years ago, HealthifyMe has now grown to more than 10 million customers across more than 300 cities in India.

“We are seeing 3x (annual) growth with a reducing cost of customer acquisition and strong business fundamentals,” Tushar says, without disclosing their revenue in FY19.

In a chat with YourStory, Tushar recollects how their app went through seven iterations, turned profitable, and will help them achieve Rs 100 crore this year:

A graduate from the University of Pennsylvania, Tushar worked at UIDAI during 2010-2011, which he says was the inspiration to become an entrepreneur. “Half the people at UIDAI were entrepreneurs, Nandan Nilekani and Bala Parthasarathy among them. People were willing to work out of passion for seven days a week, to do something great for the country. It inspired me to build something that also has a positive impact on the country,” he recollects.

HealthifyMe started as a result of an experiment Tushar did in 2011 - on living on Rs 100 per day –to understand what it meant to be a below poverty line (BPL)  Indian. During this experiment, Tushar and his then-partner Matthew Cherian built an Excel sheet with nutritional information of Indian food.

After consulting various experts in the field, they found out that there was no nutritional information database for Indian food. They worked with the National Institute for Nutrition to curate and further build the list. This database is at the core of HealthifyMe.

The healthtech startup began with Tushar’s savings of Rs 15 lakh. The business was initially done through hospitals (in 2013) - by only giving access to paying customers that were visiting doctors, and by working with doctors to help them get healthier and fitter. The team soon realised that the larger market was in the consumer space, and decided to open up.

Towards the end of 2012, Tushar was joined by ex-Googler Sachin Shenoy as Co-founder, as Matthew moved on.

Tushar recounts the early days of fund raising: Sashi Reddi, Founder of Applabs, was the first angel investor whom Tushar had approached after being connected by Microsoft Accelerator. Sashi liked their initial deck and suggested that they meet Srini Koppolu (of Hyderabad Angels). Tushar rushed to meet Srini at a café in Hyderabad, and recalls calling Sachin to check if the website was working at the moment.

“Sachin told me to hold on for five minutes, and then called back saying ‘It’s working now; you can go in.’  So I walked in. Once he saw our product, Srini realised how we had quantified and analysed Indian nutritive elements to provide insights to customers. He was convinced that this would be huge,” Tushar recollects.

Many years later Srini would tell Tushar that what he really liked was that the next morning Tushar had followed up with an email, thanking him for the meeting, along with a login ID so he could test the product himself. “He said it was very professionally done, and he felt that with a good product and good vision, the founder would be able to logically follow through,” Tushar says.

Sashi went on to support the company and invested in the seed round (and in subsequent rounds too).

Amongst the first institutional investors to reach out to HealthifyMe were Blume Ventures, Chiratae (then IDG Ventures), and Micromax.

“Back then, we were making Rs 20 lakh-30 lakh in revenue every month. They knew that we would build something product-light and scalable. This year, the launch of smart plan is the answer to their original thesis,” Tushar says proudly.

For scaling up, HealthifyMe’s tool was a conversational AI-powered nutritionist launched in late 2017. Named Ria, it uses the learnings obtained from HealthifyMe’s tracked meals and message exchanges between coaches and clients (in more than a billion words) and gives personalised answers to users’ queries.

With AI nutrition coach Ria, HealthifyMe aims to do what Siri and Google Assistant cannot

Building this AI is a team of 60 people (out of HealthifyMe’s total team of 150), including engineers, and machine learning, and data science experts.

According to Tushar, the biggest constraint in building AI is not the access to algorithm but access to data. “What matters is if you have filtered or organically obtained data. The relevant data should be unaffected by data practitioners. AI learns from that data.”

Ria brings in the money

Tushar adds that their net promoter score (NPS) went up from around 50 to above 70 in a year. This inspired the team to launch Ria independently, outside the coach plan as well. “Now, we have more people in smart plans than coach plans. So Ria is handling 70-80 percent of queries now,” he says.

HealthifyMe’s smart plans start from Rs  299 per month, and coach plans (Ria + human coach) range between Rs 1,199 per month and Rs 3,999 per month. Tushar claims that while the majority of business comes from coach plans, their smart plans are growing at a faster rate.

“A little over two years ago, we crossed Rs 10 crore in run rate, and soon we will cross Rs 100 crore in run rate (this year). That shows our 10x growth. This fiscal, we want to cross five percent on paying consumers from the current 3.8 percent,” Tushar tells YourStory.

The subscription model in B2C has been working in India for a while – as seen from the growth of Amazon Prime, Swiggy Super, Netflix, etc. For HealthifyMe, only one percent of the total user base was paying users till two years ago. One year ago, it became 1.8 percent; today, the figure is at 3.4 percent.

Currently, 80 percent of HealthifyMe’s revenue comes from B2C model. They also have a B2B2C model, through which they partner with corporates and healthcare institutes to distribute their product to their employees.

“The profit margin is similar in both models. B2B2C is maybe slightly more profitable because we don't have to spend anything on marketing,” Tushar says.

Tushar wants HealthifyMe to evolve into a wider platform to advise users on what to eat, or when to get tested against medical conditions. It is now piloting doctor consultation too. Although the company had recently launched an online marketplace for healthy foods, it has shut it down and is now focusing on healthy foods in private label.

HealthifyMe claims to have almost no competition, as they have a uniquely differentiated proposition - providing accessibility and affordability through AI.

“Every Indian should get access to smart plans through us or subsidised by others. I want HealthifyMe to be available at a cost cheaper than a movie ticket or a Swiggy meal,” Tushar says.

Its scope for growth is massive, as internet penetration and fitness awareness are rising in India. Their other market, Southeast Asia, also has similar dynamics of urbanisation and sedentary lifestyles, which promises growth for this product.

Tushar believes that each vertical in the health and fitness sector can have one or two leaders. And HealthifyMe is all set to be one.

A tale of two startup ecosystems: how do Indian entrepreneurs differ from their Silicon Valley ...