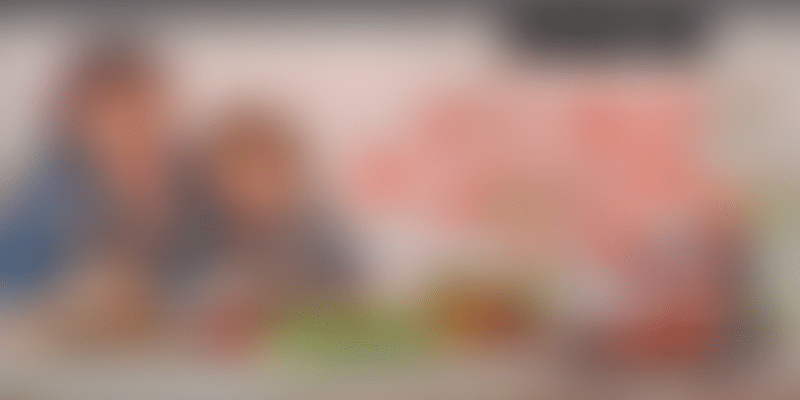 Serial entrepreneur Bahubali Shete is a veteran in the Internet of Things (IoT) and product development space. In fact, he was also the recipient of ‘IOT Thought Leader Award’ from the Indian IoT Congress in 2017.

Shete’s previous venture Connovate became the first Indian startup to have an exit in the IoT space when a Motorola-owned firm acquired it in 2016.

Following the exit, the founder — also a huge proponent of voice-enabled technology — decided to bring IoT-led innovation into the culinary space. “Cooking is my passion, and I wanted to bring it together with IoT,” he tells YourStory.

Thus, he, along with his wife Asha Shete, set up Klove Chef in late-2017 with offices in the US, Canada and Bengaluru.

The company refers to itself as the “Google Maps for cooking”.

Founder and CEO Bahubali Shete explains, “Our idea was simple: to have a solution that can converse with customers right from their meal planning and grocery shopping to recipe discovery and final meal preparation.”

Users can access the startup’s conversational AI platform via any Amazon Echo and Google Home device. All they need to do is enter a kitchen and go, ‘Alexa, open Klove Chef’ or ‘Hey Google, talk to Klove Chef’ and then go on to make delicious meals tailored to their taste buds.

As Klove Chef is an intuitive AI-based product, its algorithms only get better with use, learning to adapt itself to users’ cooking patterns and schedules, health and dietary needs, and tastes and preferences. With time, recipe recommendations become more accurate and personalised as well.

Users can even use it to add items to their shopping lists. Say, you run out of spices while cooking, you can just say, ‘add spices to my shopping list’ to your Amazon Echo or Google Home device.

As for recipes, Amazon has enabled an Alexa Skill with a list of ‘speakable recipes’ Klove Chef offers. These have been handpicked from various cookbooks and are also shared by popular food brands.

In essence, Klove Chef is a real-time, voice-enabled kitchen assistant.

‘Alexa is your friend - talk to her about anything’ – Amazon Echo country head speaks on locali...

On the growth path

After beta-testing for a year, during which Klove Chef was selected and backed by Food-X (the world’s largest food accelerator), the startup roped in a third founder — Indian celebrity chef Sanjeev Kapoor — towards the end of 2018.

“We cannot apply simple NLP models in the kitchen as the vocabulary used is different. It is very localised and is culture-specific. Celebrity chef Sanjeev Kapoor was the one who brought YouTube cooking videos to households in India. His depth of experience in consumer needs is the most critical part of our solution today. His team has been helping our ML team with culinary vocabulary, culinary techniques and culinary science."

An average recipe can generate up to 2,000 data points, with which Klove Chef’s AI/ML engines are trained. “It is a continuous process and we’re constantly feeding in more recipes,” adds the founder. The startup has just launched ‘Sanjeev Kapoor Recipes’ skills on Amazon Alexa. The skill is live in India, and is currently inviting users in US, UK, Canada, and Australia to for early access.

Klove Chef is also in the process of becoming a “multi-modal solution” that would be available on not just smart speakers, but also on Fire TV and other smart screens, as well as all smart kitchen appliances that have Alexa built-in them. Further, the company plans to add support for more languages soon.

“We started as a voice-only solution, but are now developing an app for smartphones and tablets. We realised that people browse food videos on their personal device first, and then use a voice assistant because cooking needs to be a hands-free process.”

The company is quite bullish about the conversational cooking opportunity globally. “As we are extending the solution beyond smart speakers, adoption will grow rapidly. We are looking at two million consumers by mid-2020 and tens of millions by the following year,” he notes.

Klove Chef is backed by one of India’s most celebrated angel investors, Rajan Anandan, who’s put in an undisclosed amount in the startup.

In an email to YourStory, Anandan says,

“What makes Klove Chef stand apart is its unique concept of dynamic personalisation of recipes that it generates on-the-fly based on consumer preferences and diet needs during cooking. This is an AI-first play in the food industry that is gaining real traction with many large food brands and smart home players. Klove Chef has a strong team and is riding on new cooking-at-home trends in the US and developed markets.”

Also, Klove Chef has raised about $1.2 million so far from two other investors and is looking to close a Pre-Series A round of $3.5-5 million.

Further, the startup is also aiding discovery for consumers. While users had to say ‘Alexa, open Klove Chef’, they can now directly jump to a recipe. This has been facilitated by Amazon Alexa.

“In smart devices, you have to enable the skill to get started. So, discovery can be a problem for some users. But that has now been solved on Amazon devices because of our collaboration. The ‘Sanjeev Kapoor Skill’ is auto-enabled, you just have to say what you want to cook.”

Building smart robots for the world, this Bengaluru startup aims to transform the way industrie...

Voice-assisted cooking for all

Though Klove Chef’s first target audience is, what it calls, “millennial moms and dads” who watch cooking videos on YouTube and Instagram, its end goal is to reach “everyone who cooks at home and has a smartphone”.

Voice-enabled cooking might still be a niche area, but it is an emerging trend in Western markets, with several F&B companies looking at content marketing via voice. These are the B2B clients Klove Chef is targeting. “We are offering ourselves as a white-label SaaS solution to these companies.”

For consumers, however, the solution is free. There are 50 million smart speaker households in the US, and Klove Chef wants to reach each one of them. Overall, the opportunity in voice services is massive and is estimated to reach $31.8 billion by 2025, according to Grand View Research.

After all, with technology penetrating every aspect of human life, why should cooking be spared?

Smart speakers are now the fastest-growing consumer technology ahead of AR, VR, and wearables