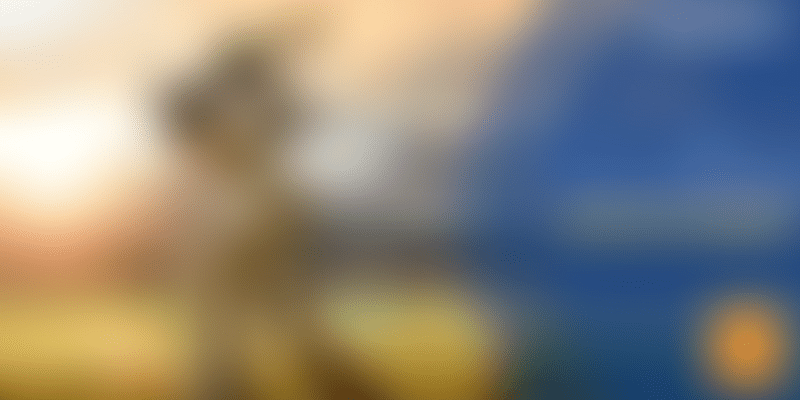 Fantasy gaming is a rage in India now. Industry estimates suggest there are over 60 fantasy sports startups in the country competing for user attention. Jaipur-based MyTeam11 is making its mark too.

The frame contained India’s ‘Champions’ plaque along with the widely grinning faces of the Men in Blue. But there was one more thing that grabbed eyeballs on the rectangular plaque: the MyTeam11 branding.

A month ago, MyTeam11 had been roped in by Cricket West Indies as title sponsors of the series. The startup went on to replace longstanding bilateral tournament sponsor Paytm on hoardings, boundary boards, winner trophies, plaques, and more.

Before this association, very little was known about this Jaipur-based fantasy sports startup. This, despite the fact that MyTeam11 had been presenting on-air sponsors of the Pakistan Super League in February, and has also been the official partner of the Pro Volleyball League and the Karnataka Premier League.

But, when it comes to brand visibility, as MyTeam11 discovered, there is no bigger stage than Indian men’s cricket.

Although it launched in 2017, MyTeam11 did not gain recognition until this year. First, through the IPL and the Cricket World Cup, which sent user engagement on fantasy sites soaring, and then with the India-West Indies series.

Founded by Jaipur techies Vinit Godara and Sanjit Sihag, the bootstrapped startup counts over 15 million downloads across platforms and claims eight to 10 million users. About 10-12 percent of this user base is active, which is "slightly above" the industry average. Not only that, MyTeam11 claims to have surpassed its revenue of the past year in the first quarter of 2019 alone.

Like all fantasy sports platforms, it allows users to create imaginary teams and earn real cash rewards based on the players’ on-field performances. MyTeam11 takes a cut off each winning.

At present, there are four sports on offer: cricket, football, kabaddi, and volleyball. More will be added shortly, say the founders. MyTeam11 runs over 50 contests every day and winnings can go up to Rs 15 crore or more. Users also earn cash bonuses on sign-ups.

Growing in a ‘David-versus-Goliath’ market

MyTeam11 says it has grown 30X since launch and looks to close the year with an ARR of $20-22 million. It is targeting revenue of $100 million in the next four to five years. But, given the meteoric rise of fantasy sports in India lately, that could happen much sooner.

“Dream11 has done a tremendous job of educating Indians about fantasy sports. It has become a household name. There is a clear trickle-down effect. Once people use a particular platform, they have a tendency to check other sites too. Hence, several companies are getting into the sector now.”

When Tencent-backed Dream11 became India’s first gaming unicorn this April, it validated fantasy sports as an industry to reckon with. The Mumbai-based startup counts about 70 million users on its platform - a near-stranglehold on the sector. But, a few others like Mobile Premier League (backed by Sequoia), HalaPlay, BalleBaazi, Fantain, My11Circle, and of course, MyTeam11 have emerged as exciting alternatives.

The Indian Federation of Sports Gaming (IFSG) estimates there are over 60 fantasy sports platforms in India today, most of which sprang up in the last 12-18 months. An estimated 100 million users are poised to take to one or more of these platforms/apps by the end of 2019, compared to only two million in 2016. The market is projected to touch $5 billion by 2021, IFSG states.

“It is still a David-versus-Goliath market,” says Vinit, referring to Dream11’s unfettered dominance, but “there are big opportunities and we have emerged as a strong player.”

“Users have noticed us, and they know we are here too,” he adds.

MyTeam11’s users are typically in the age group of 18-25 and belong to Tier-II and III cities and towns. This is because of its availability in eight Indian languages - a feature not many fantasy sports sites offer. In fact, it claims to be the only player in the market to have launched with a multi-language option.

The platform might also be attracting users from Bharat because of its brand ambassador Virender Sehwag, a hugely popular former cricketer, who resonates deeply with the Hindi heartland. About 20 percent of the players on MyTeam11 are language users, the company says.

“But we might cut down on languages a bit because it slows down our go-to-market for a lot of things. We’ll stick to English and Hindi for now,” Vinit reveals.

Despite the growth of fantasy sports in India, it hasn’t been smooth sailing for the sector. Many startups, including Dream11, have had to ward off court cases accusing them of illegal activities.

“The government still doesn’t know what fantasy sports is. It doesn’t know how to tax the sector. And, the general public associates fantasy gaming with gambling.”

Recently, MyTeam11 became a part of the IFSG solely to push regulations for the industry “so that everyone benefits”.

Other challenges come in the form of customer retention, given the plethora of fantasy sites today. As cash rewards dry up, user loyalty is hard to come by.

“Earlier, our cash bonuses were quite aggressive. We did that for user traction, but we toned it down significantly. We realised the audience wants smaller sports. It helps them improve their skill sets and better their chances of winning. So, we’ll give them that.”

Despite having its origins in Tier-II India, MyTeam11 has big dreams.

Its ultimate goal is to sponsor athletes in the Olympics. The founders say they have been approached by “very good investors” for a pre-Series A funding round. But they are looking at companies that can “mentor” them in the next phase of growth and “help us find the right talent,” says Vinit.

“That is a bit of a problem in Jaipur,” he ends.